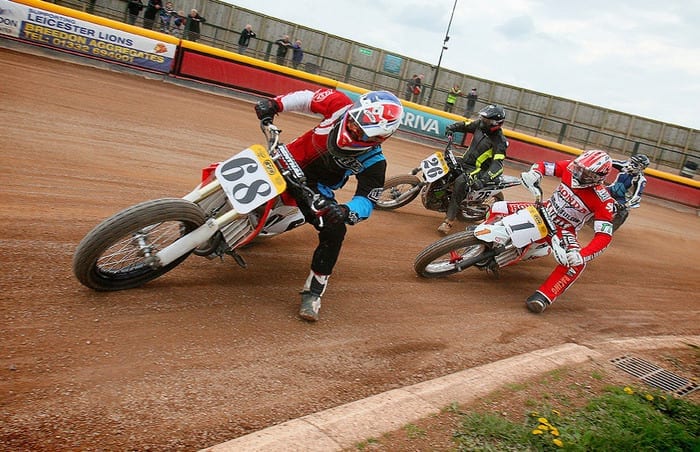 Defying the weather forecast the UK dirt track season started with an explosive race meeting at Leicester Speedway. The 85% chance of rain turned into a 100% chance of exciting racing across all classes in round one of the DTRA National Championships.

The well groomed track had been watered and packed perfectly for the Maxxis dirt track tyres used in the UK series.

The big question in the Pro Class was the continued dominance of #1 plate holder Aiden Collins. Honda rider Aiden is a multiple-British Champion and starts 2014 as a key contender.

Looking to upset his dominance is Suzuki’s Peter Boast and the new Kawasaki dirt track team featuring 15-year-old Oliver Brindley and Alan Birtwistle. Add into this mix the ultra fast twins Tom and Tim Neave and the battle for the 2014 championship is looking to be tight.

It was Aiden who took the win in the 12-lap final leading from the first corner. Aiden was under constant pressure from the Tim Neave. Tim was looking for any gaps or mistakes left by Collins but none were forthcoming. Young Oliver Brindley took maximum advantage of his new Kawasaki setup. He took a solid third place ahead of team-mate Alan Birtwistle securing him the 100% rider of the day prize pack.

The restricted class saw the first win for Ross Herrod in only his second full season of racing with the DTRA. Ross took an excellent win followed home by newcomer Les Wood. Third spot went to the more experienced Les Stevens who put his new skills gained at the recent Noyes Camp to work.

Rookie rider Justin Heavens also looked good in his first meeting with the DTRA. He took a clear win in the Rookie Class which moved him straight up into the restricted class for round 2 and won Deus Ex Machina rider of the day prize pack.

Tim Neave took another podium spot in the very popular Thunderbike Class taking his CR500 Honda to a clear win ahead of Dave Chadburn and Anthony Brown.

Neave and Chadburn dominated the final with Brown and his team-mate Geoff Cain battling hard for the third place on the podium.

The new DTRA Vintage Class was a big hit with riders and fans alike. Two French riders, Dimitri Coste and Frank Chatokhine dominated the heats battling for the lead but a mistake on the start line by Coste in the final was monopolised on by Nick Ashley, who took a good second place behind Frank Chatokhine.

The youth classes provided some of the tightest racing during the day. Exciting heats and a close double points final saw George Hopper take the win in the Junior Class from Leon Collier whilst Bailey Fellows stood on the number one spot for the youth Inters ahead of Skye Adams and Jordon Lee Miller

The action moves to Coventry on May 18 for round two