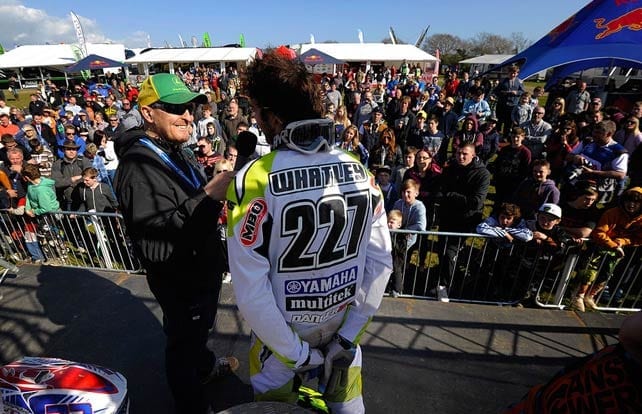 The opening round of the 2013 Red Bull Pro Nationals took place at Landrake Moto Parc over the weekend with 4,000 fans enjoying an action- packed 29-race programme and unseasonably good weather.

Big winner in the Pro MX1 class was MBO Sport Yamaha’s Kristian Whatley who went 1-1-2 over the weekend to top the podium from the French pairing of wildcard rider Milko Potisek and defending champ Nico Aubin.

“The weekend’s been good and I’ve had some good starts for the first time this season,” says K-What. “I’ve been using a start gate from Risk Racing in practice and it’s made a big, big difference. It was vital to get my starts dialled this weekend – especially in the last race when it got so slick. I’m happy to be back on the podium.”

The French connection also had a strong showing in MX2 where Evotech Stevens KTM rider Steven Lenoir came out on top with a 1-2-1 card ahead of Heads & All Threads Suzuki’s Graeme Irwin and South African defending champion Neville Bradshaw.

“It’s good to start with the red plate and it’s one I’ll try to keep,” says Steven. “We had a good weekend, made a lot of changes to the bike and I was feeling comfortable.”

The rising stars of the Red Bull Elite Youth Cup put on an awesome show over the weekend with James Harrison topping the Rookies after a weekend-long duel with Dan Thornhill while down in the BW85cc class Jay Hague remained unbeaten with a fantastic five-from-five card.

“It’s been a great start to the season,” grins Jay. “I was expecting to be up there – I’ve done a lot of hard work over the winter at lots of different tracks with Rich-Mike Jones and the RMJ Academy and it feels like it’s paid off.”

Shock result of the weekend came in the SW85cc division where last year’s 65cc champ Tom Grimshaw won both Sunday’s motos to put his Powerband Racing KTM on top of the podium after winning a tie-breaker with Charlie Cole.

“I don’t know what it is about me and this track – I call it Landrake luck,” says Tom. “I always seem to do well and I really enjoy the track so that’s probably got something to do with it. We were just aiming for top five and we never expected this. When I got my first race win we thought it was brilliant so to take the overall is amazing.”

The 65cc class was won by 11-year-old Gary Ashley from Kent.

The series now moves to Weston-super-Mare beachfront for round two on May 18-19.