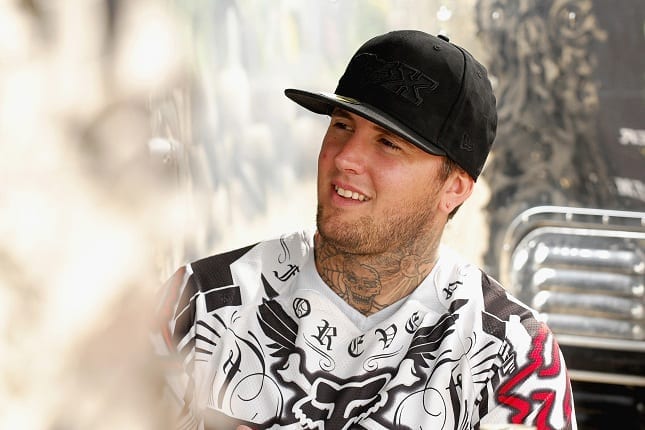 As part of e22 sport’s pre-event promotions they’re taking over Weston’s Princess Royal Square on May 5 for an afternoon and evening of Freestyle Motocross mayhem. Now that’s something to look forward to this weekend.

There’s going to be sick skills from five awesome UK freestylers, but e22 wasn’t satisfied with sick and awesome – they wanted radtacular – so they made the show free!

When he’s not jumping at locations across the globe Chris is based for most of the year in Torrevieja near Alicante in Southern Spain. A past contestant in the prestigious Red Bull X-Fighters tournament, this heavily-tattooed FMX athlete goes by the nickname Swampy and is the go-to Brit when long-distance backflips are called for!

“I’m training hard for the Weston shows,” says Chris. “I’ve been working on some backflip variations which really are pushing me to my limits and I’m going to unveil a new trick I’ve developed especially that I’m calling the ‘Super Pier’. There have been some seriously sketchy moments but the harder I ride the more I’m getting them dialled in.”

The nearest we’ve got today to a hometown hero for the Weston fans, Jamie’s one of the founding fathers of the UK FMX scene and is famed for his ability to tail whip a 100kg-plus motorcycle almost to – and sometimes beyond – the point of no return.

“I can’t wait for Weston,” says Jamie. “Being from Exeter it’s pretty much a home show for me so I’m really excited. It’ll also be my first show on my brand new Kawasaki KXF450 which just adds to the excitement. It’s going to be an amazing day.”

A member of the Bolddog FMX display team, Dan’s a regular on the Top Gear Live circuit and has recently returned to the UK after back-to-back engagements in the United Arab Emirates and Moscow. He’s also a thoroughly nice guy!

“Weston is going to go off,” says Dan. “We’ve all been hard at work at home preparing for this event. New tricks, new bikes and a new location – I can’t wait to get there and bust big for the crowds!”

“Go big or go home – or go to hospital!” Dave Wiggins has got a pretty simple – and typically gung-ho – gameplan when it comes to Freestyle Motocross. The 26-year-old is the sharp-dresser who puts the style into freestyle in the UK – both on and off the bike – with his outrageous whips, washboard abs and designer clothes winning him fans whether he’s hitting the ramps or the nightclubs.

“What I love about jumping in front of big crowds is that I react to their reactions,” says Dave. “So the more they cheer the bigger I go and I just know they’re going to go wild at Weston this weekend.”

Dan Whitby’s sidekick on the Bolddog FMX team, Arran’s a dyed-in-the-wool daredevil who likes nothing more than hitting the ramps and letting it all hang out.

“I’m super-excited for Weston,” says Arran. “It’s going to be such an awesome event at an awesome venue and I can’t wait to tear it up with the UK’s best Freestyle Motocross riders and put on an epic show.”