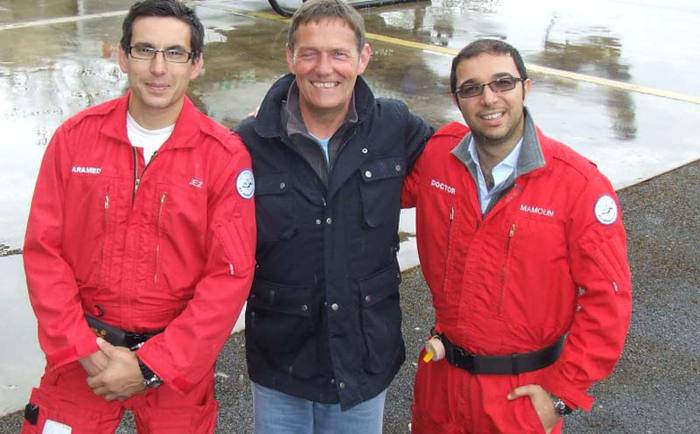 A motocross rider airlifted to hospital after a racing crash has been reunited with the Kent, Surrey & Sussex Air Ambulance doctor and paramedic who saved his life.

Paul Aylward was competing in a Southern Motocross meeting at Northchapel when he lost control of his bike and crashed during qualifying, suffering critical head and chest injuries.

They carried out emergency life-saving treatment at the track-side and performed advanced medical procedures usually performed only in hospital.

Paul, from Horsham, was then flown to the Royal London Hospital while his wife Lynn was rushed to the major trauma centre under police escort.

The self-employed truck driver spent 11 days in intensive care and a total of five weeks in hospital but has since made an excellent recovery.

He said: “I remember picking up my motorbike from the bike shop the day before the meeting, having spent quite a bit on repairs and a service.

“My next memory was about five to six weeks later when Lynn came to sit with me for a while. As it turns out, it was eight hours a day she had been sitting with me but at the time, time didn’t mean anything to me.

“I also had post traumatic amnesia and was tested by the neuro occupational therapists daily with a set of questions. I had to answer the same questions correctly for three days in a row before I could be discharged for further rehabilitation.

“One of the answers I kept getting wrong was my age. I said I was 83, which they thought was hilarious, but that was actually my racing number.”

Paul had been a keen motocross rider for more than 30 years but has now retired from the sport following the crash in October.

In March, he was awarded the Southern Motocross Clubman of the Year in recognition of his amazing determination to recover from his injuries.

A club spokesman said: “He has refused to be beaten by the injuries and, helped by his wife Lynn, appears to be recovering well.”

Paul and Lynn recently visited the Air Ambulance base to thank Mamoun and Jez for saving his life and kindly donated more than £1,000 to the life-saving charity.

He said: “It was absolutely brilliant to meet and personally thank them. I’m so grateful and very aware that without the professional expertise and decision making of Mamoun and Jez my situation would be very different. I am also very grateful to all of the Air Ambulance team. I feel incredibly lucky that after just nine months I can lead a near normal life.

“The way I look at it is that for years I rode my bike and had good luck, then I crashed and had a bit of bad luck, but I’ve had good luck ever since.

“The support I’ve had from my wife and people around me has been un-believable.”

Dr Abu-Habsa added: “We are absolutely thrilled with Paul’s recovery.”

About the Kent Air Ambulance service:

The Air Ambulance service in Kent, Surrey and Sussex costs around £5 million annually to stay airborne. Receiving no funding from the National Lottery, the charity relies almost entirely upon the generosity of the public to support the two helicopters based at Marden in Kent and Redhill in Surrey.