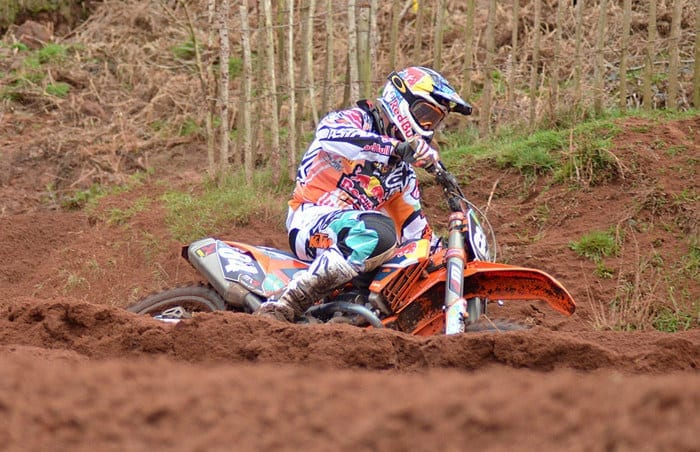 Red Bull KTM’s Jeffrey Herlings made a triumphant return to competition this weekend after a month-long injury break. Herlings is a fan of the annual Hawkstone International MX and was an early sign-up for the event.

But an injury shortly after his announcement to compete put his participation at risk. Thankfully the Dutch pilot healed in time and put his injury woes behind him with an impressive display of sand racing at the famous HIMX meeting.

Herlings – the MX2 2013 World Champion – signalled the challengers to his title that he is back in form by taking victory in both MX2 races and the Superfinal.

Kemea Reytec Yamaha’s Petar Petrov took the second step on the podium with Lars Van Berkel (Honda) taking third. Martin Barr and Ben Watson had a successful day at the office with a fourth and fifth respectively.

Mel Pocock felt confident and his team were happy with his form coming into Hawkstone but some bad luck struck in the first moto when his axel failed, leaving Pocock little chance of an overall podium. Pocock would finish the day 10th overall and 11th in the Superfinal.

Speaking after the race a delighted Herlings said it was great to be back and riding on a sandy track, similar to those at home in the Netherlands.

Jeffrey Herlings: “I have been off for six months so I am very happy to be back. The track was pretty gnarly but it was really fun and I had a great times. I liked the track because it’s a lot like riding at home in Holland and this win gives me confidence for the first GP next weekend. I am really looking forward to going to race in Qatar.”

British rider Shaun Simpson, who returns to ride a KTM for Team HM Plant KTM in 2014, won the MX1 overall competition with the ever popular Latvian rider Matiss Karro taking second overall and an impressive second spot in the Superfinal.

Following Karro was 24MX Honda Team’s Jens Getteman who followed his third overall with a fifth place in the Superfinal.

Gert Krestinov and Brad Anderson made up the last of the MX1 top five while top British rider, Tommy Searle finished a disappointing seventh overall and 27th in the Superfinal. Although with many of the MXGP teams now making their way to Qatar to prepare for the race at the Loisal circuit, we wouldn’t be surprised if Tommy took the view of better safe than sorry.