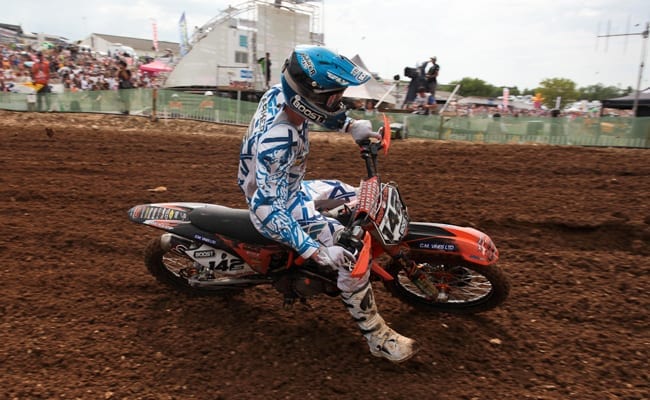 Proppa.com KTM report back from a tough weekend at the French GP at St Jean d’Angely…

The Saturday sessions proved to be tough on both Martin Barr and Nathan Parker. During the qualifying race Barr got off to a good start in 18th and looked to impress but a crash in the third lap dropped him to the back of the field. A hard charge returned him to 24th by mid-race where he fought off Herjan Brakke to the end. Parker found himself in 30th after the first lap, keeping sight of and pace with GP veteran Loic Leonce throughout the race, ending in 28th.

An epic thunderstorm soaked the track through properly on Saturday evening and on Sunday morning it was still wet when the first MX1 race went to the gate. Barr didn’t have the best of starts but was making good progress holding a tight line up the inside of the first hill when Clément Desalle went down in front of him, causing him to take evasive action and dropping back down the field. A hard-fought, valiant effort brought him back into the points to 19th, only to be pipped to the post in the closing laps and ending 22nd.

In the second race Barr found himself within a hair’s breadth of 20th again but without a rear brake for a portion of the race, he dropped back several places before recovering to 26th for a disappointing 28th overall and nil points.

Parker on the other hand found himself making good progress throughout both his races. In race one he looked tentative and was at the back of the field as he completed the first lap, however he soon settled down, learning quickly to make hard passes where necessary and make the most of arising opportunities to win more positions. His efforts gained him 28th place by the end of the race. In race two he looked much more like himself and although he again made a poor start he rode aggressively throughout the whole race progressing 27th by the finish, crossing the line just 1.7 seconds behind his team-mate and ending the weekend in 29th overall.

Team Principal Steve Turner: “It’s been a tough weekend on a tough track and it’s the kind of track we’re not used to riding. Martin struggled to find his rhythm all weekend and today he looked like he would score points in the first one, only to get passed by a few people in the last few laps and missing out on a point-scoring ride.

“This weekend was a good test for Nathan and he got his first GP under his belt. He really struggled in his first race – it’s the first time he’s raced at this level and he was too cautious and too polite when he was getting passed by the front runners. But he learned and in the second race he rode a lot better and was much more aggressive.
“Both riders suffered from poor starts and at this level if you don’t get away with the fast guys it’s very tough to come back through the pack. The MX1 field is stacked with good riders and they’re all fast. I suppose that’s the biggest difference when you step up to this level. I mean, look at David Philippaerts who finished third in the first race but after falling off on the first lap in the second race even he could only get back to 18th.”

Martin Barr: “I’m pretty disappointed this weekend. All day Saturday I struggled with the track, I was just not riding the way I normally can and just couldn’t get a good rhythm. In the first race I didn’t get the best of starts, tried to cut round the inside but Desalle went down in the second corner and I got caught up in that. When you don’t get the start, with these guys it’s hard to come through again because they are just so fast and I ended up in 22nd.

“In the second race, I had another reasonable start, then got tangled up with a few people. I got going again, put my head down and then without a back brake stalled the bike a couple of times coming down the big downhill sections. I ended up 26th in that and that’s not where I want to be. It’s a weekend to forget and I’m just looking forward to Whitby at the Red Bull Pro Nationals this weekend.”

Nathan Parker: “Yesterday wasn’t as enjoyable as today, even though I had longer races today. Yesterday I struggled with my confidence more than anything, just nerves and riding tense. I qualified 28th in the heat race which is better than what I’d been doing previously in the day. Today I felt a lot less pressure. I got a bad start in the first race and didn’t realise I was dead last in the first lap so pulling back to 28th was a good ride. I didn’t get too tired, which was a good sign.

“In the second race I had an all right start, dropped quite a few places in the first lap and started pulling through and got to Martin. I think I pushed that much that I knackered myself out and looked and there was still 17 minutes and two laps to go! So I slowed down a little bit, got my breath back and then charged again towards the end and ended 27th. So two strong rides and the first GP ever out of the way with no drama and no injuries, I’m happy with the way it went.”