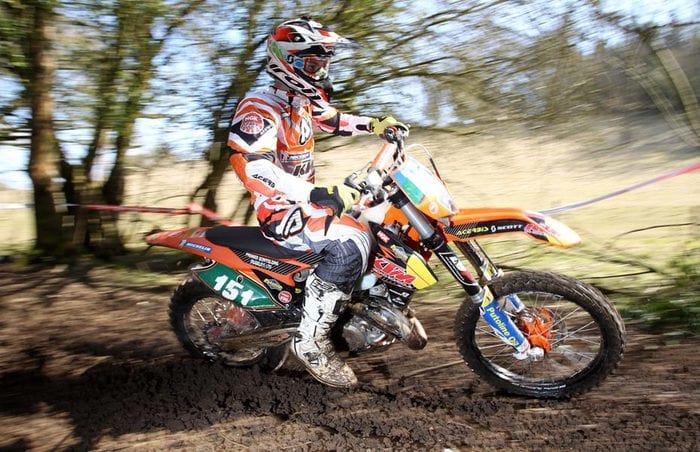 The 2013 Husqvarna British Sprint Enduro Championship moves onto the popular Llangrove venue, near Monmouth, this weekend, where following on from the series’ first one-day event held in Mid Wales the BSEC returns to its more familiar two-day format.

Awaiting those entered is a freshly graded track that has delivered some of the series’ closest racing in previous years. A fast, flowing circuit offering many different challenges, with a promising weather forecast for the week ahead competition is likely to be closer than ever in all classes.

Last time out at Saints Well it was Husqvarna mounted Finn Matti Seistola who topped the Elite class ahead of McCanney brothers Danny (Gas Gas) and Jamie (Husaberg). Since then Jamie’s gone on to become Enduro Youth World Champion, and will be looking to get one back on elder brother Danny as well as making life tough for Seistola.

Just three points separate Seistola from Jamie McCanney at the top of the Elite championship, with recent Welsh Two Day Enduro winner Daryl Bolter (KTM) close behind in third. Determined to put his disappointing round three performance behind him, and continue the form he produced at ‘the Welsh’, Bolter will have to fend off the 450cc mounted due of Jamie Lewis (HM Moto) and Tom Sagar (KTM).

Sitting fourth and fifth in the championship standings respectively, both Lewis and Sagar are yet to claim a win in 2013. Maybe this weekend all that will change? 2012 BSEC Elite class champion Jordan Rose (TM) is another yet to produce his best form this season, and along with Tom Church (Husaberg), Lee Edmondson (Beta), and many others, will be hoping to deliver the goods at Llangrove.

In the Under 23 class Husqvarna mounted Jack Rowland will be looking to continue his unbeaten run of form so far this season, but will face tough competition in the form of on-form Steve Holcombe (KTM), the 2012 Under 19 champion. With Rowland topping the Under 23 class at each of the three rounds held so far, he takes a 21-point advantage into this weekend’s fourth and fifth rounds.

Two riders have claimed wins in the Under 19 class so far in 2013 – Joe Wootton (Kawasaki), who topped round one, and Rob Johnson (Husqvarna), who delivered wins at rounds two and three. But leading the overall U19 championship standings is Josh Gotts (TM), who has recently returned from injury.

With a plentiful supply of power never a bad thing at Llangrove, Wootton might hold the upper hand on his 450. But if this season has shown us one thing, Johnson and Gotts certainly won’t make life easy for the Kawasaki rider.

The second rider alongside Jack Rowland to have topped each day of the championship so far is Brad Freeman (KTM) in the 125cc Youth Cup class. Seemingly improving with each event he enters the young Midlander will start as clear favourite at Llangrove. Behind him Lee Sealey (Husaberg) and Jack Stains (KTM) will likely also continue their battle for the runner-up position in the class.

Brad King (Kawasaki) continues to lead the Expert class, despite placing third at round three. Six points ahead of Richard Ely (KTM) Brad will be looking to get back to his winning ways while Ely, who topped round two, and round three winner Carl Brogden, will also be going all-out to secure the win.

In the Expert Vets class Andrew Reeves (KTM) leads the way, but will have his work cut out as Carl Tiley (TM) returns to the series after missing round three.

Just 10 seconds separated Jane Daniels (Husaberg) and Katie Walker (KTM) at round three of the BSEC, with the duo trading special tests wins throughout the day. With Jane eventually getting the upper hand, and returning to better form following early season injuries, the 2012 Women’s champion will be looking to secure yet another win this weekend. Hannah Styles (Husaberg) returns to competition at Llangrove following injury.

Richard Holmes (KTM) leads the way in the Clubman class, just two points ahead of Kyle Jacobs (Gas Gas). In the Clubman Vets class Dai Beer (KTM) sits just ahead of Tim Cotton (Husaberg), who claimed the win at rounds two and three of the series.

Directions: The start area will be sign posted off the A466 at Welsh Newton, near Monmouth. Postcode: NP25 5RT.

Parking: Vehicles will be parked on a generous, flat parking area joining onto the rider’s paddock and start/finish area.

General info: Racing starts at 10.00am both days. A sighting lap (starts 9.00am) and four timed laps will take place during the morning session followed by a three-lap afternoon session. On Sunday the event will end with a prize giving ceremony.