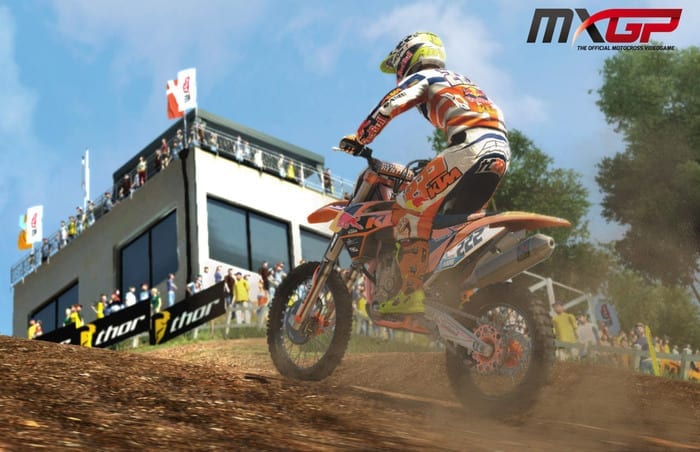 The videogame publisher PQube has announced the pre-order bonus for MXGP – The Official Motocross Videogame today.

The MXGP game is the only game based on the official FIM Motocross World Championship – for PlayStation®3, PlayStation®Vita, Xbox 360® video game and entertainment systems from Microsoft and Windows PC® – and is developed by Milestone Italian studios.

Fans who pre-order MXGP from UK retailer GAME will receive an exclusive limited edition book which details the tracks in the game, as well as giving a sneak peek behind the scenes for the game’s development – detailing the lengths that developers Milestone have gone to, to ensure it’s the most authentic representation of motocross ever seen in a videogame.

All the riders, bikes, manufacturers and sponsors of MXGP – to fully capture the ambience of the MXGP season.

Revolutionary dual-stick controls, allowing you to manipulate the bike and rider simultaneously, for unparalleled depth in handling and physics.

Real-time track deformation. Watch – and feel – the course change from lap to lap, where no two races are the same.

Online multiplayer which allows you to easily find races against players at your skill level.

Adjust every aspect of the bike to best suit the courses conditions and your own play style.

Depth of handling which allows players to express their own racing style. With no ‘correct’ way of riding – victory is entirely in your hands!

MXGP – The Official Motocross Videogame represents a huge leap forward for motocross videogames – striving to achieve the maximum level of authenticity and features that MX fans have been waiting for.

The Limited Edition MXGP Book is exclusive to GAME and is available by pre-ordering here: http://www.game.co.uk/en/games/mxgp

MXGP – The Official Motocross Videogame is out on Friday March 28, 2014.