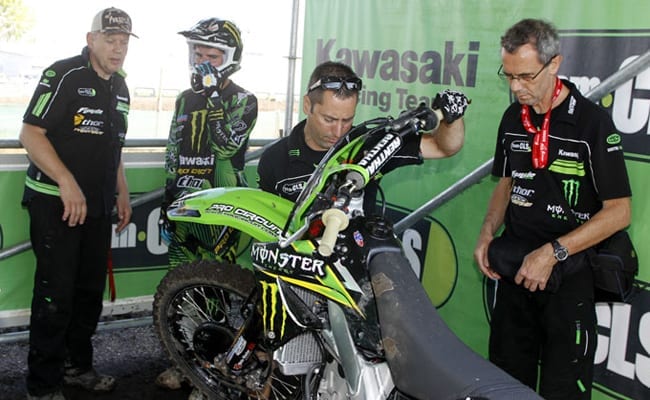 Team Monster CLS Monster Energy Kawasaki Pro Circuit will be involved this weekend in the GP of Latvia – round 10 of the FIM world championship – with Tommy Searle and Max Anstie both racing in the MX2 class. The latest member of the team Christophe Pourcel has made a late decision to skip this event in order to prepare for the last rounds of the series.

For his comeback to the GPs last weekend in Germany, just a few days after his arrival in Europe, Christophe posted some fast lap times but retired in both races. Working all weekend long with the team to set up his 450 Kawasaki to his riding style, Christophe had more testing sessions this week in the Netherlands but team owner Jean Jacques Luisetti and Christophe have decided to miss the GP of Latvia to come back stronger two weeks later in Belgium.

“For sure it has been a tough decision but we’re convinced that it was the best one,” says Jean Jacques. “Since he is back on a bike after his terrible accident four years ago, Christophe is very demanding about the bike settings and we still have to work. For sure many people will comment on this decision but if we come to retire in both heats that would be worse – we need to work in a quiet atmosphere and for sure it’s better to work during private sessions rather than a GP.

“It was important to ride Germany to know in which directions Christophe wants to go and we already made some changes on the bike but the work in not yet finished – our rivals worked all winter long to set up their material, not us due to Ben Townley’s injury and we need time. We already found solutions in connection with Pro Circuit in the USA and made several improvements this week and we’ll continue during the next two weeks to work hard. The goal is to be ready for Lommel – we all know that it’s a tough race but Christophe will be back there.”