Home News Motocross Pilots are ready for another mouth-watering round of the Red Bull Pro... 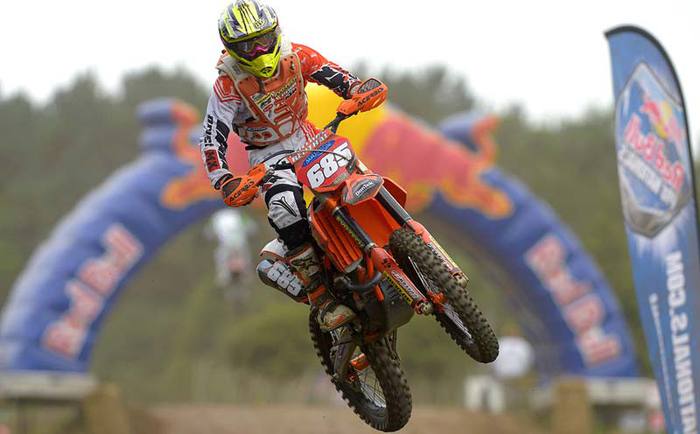 Race fans will be treated to the mouth-watering sight of an on-form Kristian Whatley versus a charging Brad Anderson with a point to prove when round five of the Red Bull Pro Nationals touches down at Canada Heights this weekend, August 3-4.

It’s been a tale of contrasting fortunes so far this season with Kristian sweeping the MX1 class in the first four rounds while Brad has battled to find form since his return from a season Down Under in 2012.

But now Brad’s switched teams, joining Buildbase Honda and returning to the marque that carried him to back-to-back Red Bull Pro Nationals titles in 2010 and 2011. The 32-year-old crowd favourite from County Durham will make his debut for Dave Thorpe’s team at the super-tough Kentish track and is relishing the chance to turn his season around.

“I need to get some good results and stamp my authority on the class,” says Brad. “Kristian’s walking away with it and it needs someone to step up and challenge him. I feel that this is the right move. Canada Heights is pretty awesome. It’s not one of my favourite tracks to be honest but it’s a real man’s track and that will suit me.”

MX2 is shaping up to be a battle between Frenchman Steven Lenoir and defending champ Neville Bradshaw. Lenoir took victory at the opening two rounds but has since seen the South African begin to reel him in with the gap now down to 10 points.

As is always the case at the Red Bull Pro Nationals, the Pro MX1 and MX2 classes are just one element of a packed programme of races with four Elite Youth Cup classes featuring the very best up-and-coming talent in the UK plus four 2-Stroke championship classes.

In the Rookie class Dan Thornhill is threatening to break clear from early season pace-setter James Harrison who has had to grit his teeth and ride through the pain of a shoulder injury at the last two rounds. Despite being beaten to the top step of the podium at Whitby by Irish visitor Glenn McCormick, Dan – last year’s class runner-up – holds a 36-point advantage.

The fighting in the BW85cc class is equally as fierce as in the Rookies and following a similar path with North Easterner Jay Hague winning the first two rounds before suffering some tough luck and slipping back into the grasp of Mitch Lewis. The 15-year-old from Kent holds a slender one-point advantage going into his home round at Canada Heights but this is by no means a two-horse title race and Jordan Eccles, overall winner at Whitby, is only 41 points off the lead.

Charlie Cole missed out on the overall win at Landrake in the SW85cc division on a tie-breaker with 2012 65cc champ Tom Grimshaw but fired back with weekend wins at Weston and Culham to establish himself at the top of the table. He saw his lead slashed at Whitby as Dylan Woodcock topped the podium but with three rounds to run the 12-year-old Hampshire racer is still 30 points ahead of second-placed Jed Etchells.

Possibly the most competitive class of the lot, we’ve seen four different 65cc overall winners from the four rounds run so far. Gary Ashley kicked the season off on top and still holds the championship lead from Jack Carpenter who has yet to win a weekend but has been super-consistent to stay within 13 points of the red plate.

The 2-Stroke Open Expert class is being dominated by Josh Waterman with Jack Gregory leading the Open Juniors. Despite a DNF last time out Lewis Gregory heads the 125cc Expert division and Rob Holyoake tops the Junior table.

Away from the track there will be all the trappings that fans associate with a round of the Red Bull Pro Nationals with Youth Motocross Try-Outs, Freestyle Motocross, the Kye Forte BMX show and Quad and Electric Trials Experiences plus children’s favourite TV characters Peppa Pig and George, Fireman Sam and Bob the Builder along with bouncy castles, face painting, bungee trampolines and Zorb Balls in Kidzone.

Admission is just £13 for adults, £3 for children and £30 for a family of four when booked online before midnight on August 1 but race fans can take advantage of the same great prices when paying on the gate.

Canada Heights is located just off Junction 3 of the M25 – postcode BR8 8DX.