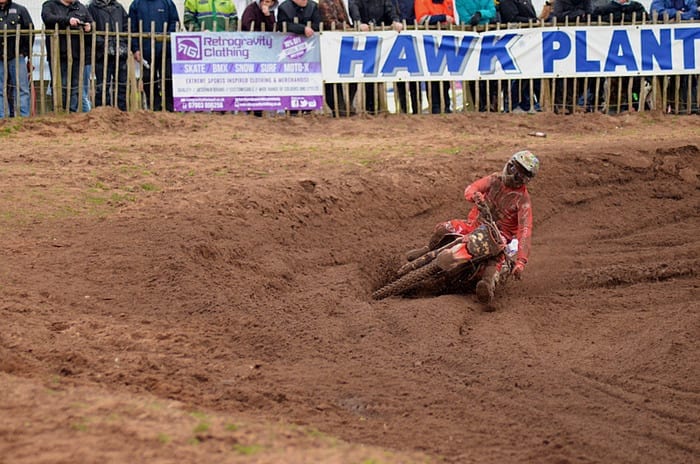 Before the start of the various championships, be it the GPs – or in the case of the Putoline Apico Honda team – the Maxxis British MX and the Pro Nationals Championship, many teams and pilots gather at the famous Hawkstone International MX for a final shake down to test their racing machines and pilot’s fitness.

The Putoline Apico Honda team and their number one rider, Neville Bradshaw were ready to take on the hard challenge of Hawkstone Park’s testing and power sapping sandy circuit.

The weather had been very kind to the organisers staying dry for three days before, and on the day, which gave HIMX time to get the track into prime condition for full-on racing in front of an estimated 4,500 spectators.

Bradshaw was in the top five qualifiers which meant getting a good gate position pick for the all important start, and said after, “With all the work the team has done so far this year with the bike setup it felt good as soon as I got out on the track.

“We finished qualifying in fifth place and from second place, to where I was in fifth was less than a second difference – so I was pretty pumped with that”

There was no way that Neville and the team could stay with the two-time world champion and sand master Jeffrey Herlings but after a eighth place start Neville kept a good pace for the whole of 25 minute and two laps race and finished sixth amongst some of the world’s top MX2 races.

A contented Neville said after the first race, “I didn’t get a nice start as I would have liked but I managed to get to sixth when I came up behind Steven (Lenoir) and he sort of messed my rhythm up a bit and I ended the race there”

Neville had an up and down race two as he started well, crashed and had to make a come back through the field of talented riders and again finishing in sixth place, which gave him sixth overall.

After he said, “I got a much better start and was running good in fourth place till I made a stupid mistake by losing the front wheel over a jump and it seemed to take me some time to get back and get going again and I re-joined in eighth but manage to get back up to sixth again before the end of the race”

The last race of the event was the Superfinal where the top 20 from both the MX1 and MX2 overall race together with the smaller capacity MX2 riders getting a small head start.

Neville got a good start and rode a good race finishing in a strong 10th place. He said after, “Brad [Anderson] and myself were having a great battle for eighth and ninth, swapping places again and again, but towards the end Todd Waters and Gert Krestinov managed to get past me so I ended the race in 10th”

He added, “Overall it was a good positive weekend and I am very happy with the bike and my fitness. So there is not much left we need to do before the first round of the Maxxis British Motocross Championship in three weeks time”