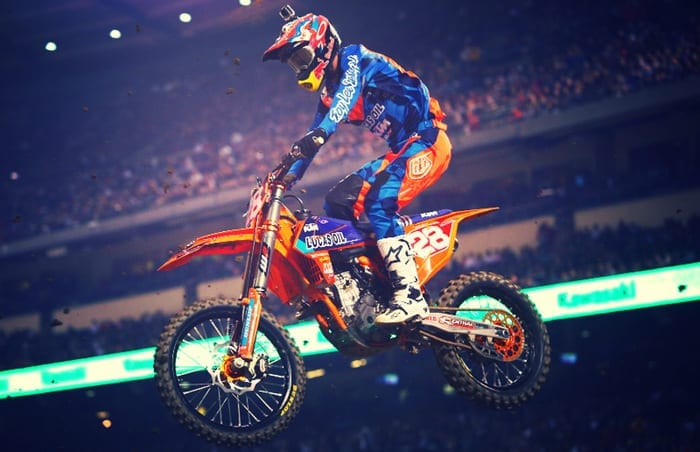 Troy Lee Designs/Lucas Oil/Red Bull/KTM’s Jessy Nelson fought his way to a sixth-place finish after a rollercoaster Western Regional 250SX Class Main Event from Angel Stadium in Anaheim, California. Team-mate Shane McElrath won his first-career Heat Race, and worked his way back from a crash to finish 10th in the Main Event.

Nelson’s night started with a great second-place ride in the Heat Race. Taking that momentum into the Main Event, he nearly grabbed the Holeshot, and quickly took over the lead on Lap two just after the finish line. Nelson’s speed was unquestionable as he quickly gapped his competition, but a small mistake forced him to give up the lead. Maintaining the speed he started the night with, Nelson used the remainder of the race to make his way up to finish sixth.

“I would have loved to win another race for the team, but that wasn’t my luck tonight,” said Nelson. “I had a good heat race and honestly should have won that Main. It’s pretty tough to swallow, but we have to keep our heads up because there is still plenty of racing this season.”

Nelson’s team-mate McElrath earned his first heat race win with an impressive ride to start off the night. He was running mid-pack and moving up when contact with another rider forced him to the ground. McElrath remounted and was determined to make up as many spots as possible, eventually finishing 10th.

The Troy Lee Designs/Lucas Oil/Red Bull/KTM team will be traveling to the Bay Area for the Western Regional 250SX fourth round in Oakland on January 24.

The Team TLD riders wore the new 2015 GP Galaxy Blue and the SE Checker Blue, along with the 2015 SE3 Galaxy Helmet at Angel Stadium in Anaheim, California. See more of the 2015 gear sets and the 2015 Moto Helmets online and at your local TLD retailer.