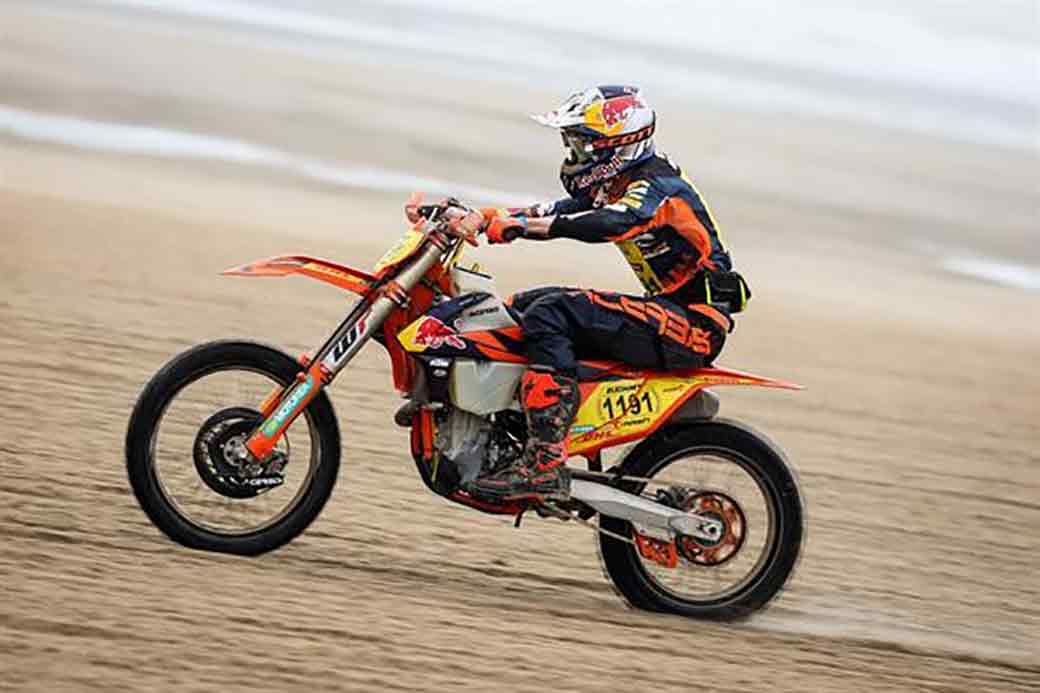 The Enduropale du Touquet is the biggest beach race in the world. Approximately 1200 riders took to the sand at this year’s event in Le Touquet-Paris-Plage, France to compete in the three-hour long event. Although billed as an enduro, the race is held purely on the beach. Often dominated by the local French riders, for 2018 Brit Nathan Watson swapped his enduro bike for a KTM 450 SX-F and lined up at the start.

Watson has been contesting the French beach race series throughout the winter, earning superb results. Winning three out of six races, the British rider travelled to Le Touquet as one of the favourites for victory. After a good start he rode sensibly for the first couple of laps, the sheer number of competitors proving to be one of the biggest challenges throughout the race.

With virtually no respite from the rough, energy-sapping sand during the three-hour race, endurance was just as important as overall speed. Watson managed his pace perfectly however and as the race went on moved his way forward, chasing down eventual winner, Milko Potisek. Arriving at the finish exhausted, Nathan was pleased with his result but disappointed not to take the win.

“I’m really happy with second place, to get on the podium at my first real shot at Le Touquet is something special, said Watson. “I am a little disappointed not to have taken the win, but it’ll give me something to aim for next year.

“There are so many riders out there, you have to weave left and right to get past them and sometimes you get a little held up. One of the biggest factors in the race is the physical hardship, other than the start straight there is nowhere to get a rest – you are stood up and riding hard the entire three hours.

“The event is amazing, with all the build-up before the race, I’ve never been so nervous. The fans are incredible too, there are so many here cheering us on. My team have been great all winter so it’s nice to reward them with this result. I definitely want to be back here next year and hopefully to take the win.”

Sand racing specialist Camille Chapeliere, having only joined KTM during the summer of 2017, was contesting his first Enduropale du Touquet for the Austrian manufacturer. Chapeliere had a very similar race to his team-mate Watson – after a good start, the Frenchman was running just outside the top-10 before increasing his pace to make his way up the order. The KTM 450 SX-F rider began to close on the front runners but was unable to catch Watson ahead of him.

This result places Chapeliere as runner-up in the 2018 French Beach Racing Championship. “It has been a learning year for me as I joined KTM last summer, and it has taken me some time to get used to the bike and to work on its development for the sand races,” said Chapeliere.

“We have proven today with our results that we have done a good job. Both Nathan and I fought for the podium and we can be happy with that result I think. I was outside the top 10 after one lap but in the second hour I started to get into a good rhythm and built my podium result – it feels great. I had good pit stop and managed to keep a good rhythm until the end, even if I was a little disappointed when I saw that we had to do one extra lap!

“I’ve finished the series on a high note with this podium, and I’m runner up in the French championship so finally it has been a good season.”