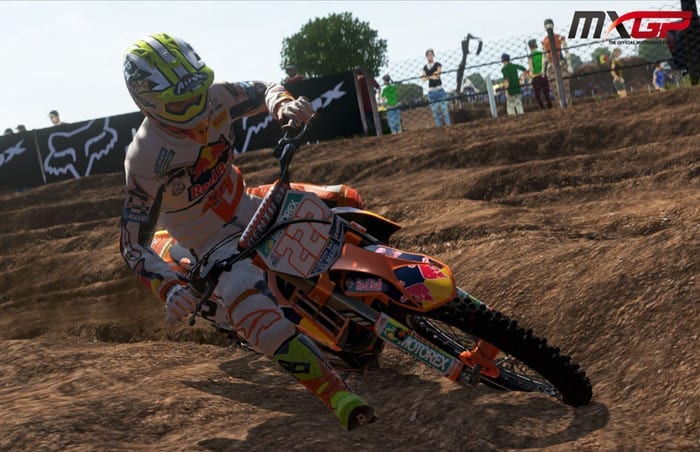 Videogame developer Milestone, the publisher for consoles and Windows PC has announced that MXGP – The Official Motocross Videogame will be available for PS4 in stores from the October 17.

Widely regarded as one of the best motocross titles ever made, the next-gen version of MXGP boasts a host of new additions and upgrades to make it the ultimate version of this uniquely intense racer.

– 18 tracks including 4 new circuits. The addition of Arco di Trento (Italy), Sevlievo (Bulgaria) Loket (Czech Republic) and Lierop (Europe) will give players the change to experience the full MXGP season.
– More riders on the track. Almost double the amount of riders on track at the same time for a more realistic and intense racing experience.
– Deformable terrain with real time graphics
– More detailed models of motorcycles. Size of the texture four times greater than PS3 version.
– 3D character models improved with increased detail and geometry.
– New Lighting environmental system (powered by Yebis 2.)
– Improved audio with wider 3d sound positioning
– Red Plate: As in reality, the rider who is leading the championship points standings has his own number plate.
– PS4 exclusive feature, the changing of light on the controller depends on the bike’s engine RPM
Advertisement

Based on one of the most adrenaline filled and challenging championships ever, dust, emotion, realism, authenticity, amazing jumps and the fight for first position are key elements of the new videogame. A lot of new features have been included into the game that will inspire motocross lovers around the world.

MXGP features all the riders, teams, bikes and rules from the official MXGP 2013 calendar including a redesigned career mode for living the feelings of the Motocross.

Developed by Milestone Studio, MXGP – The Official Motocross Videogame will be available from October 17 2014 on PlayStation4.