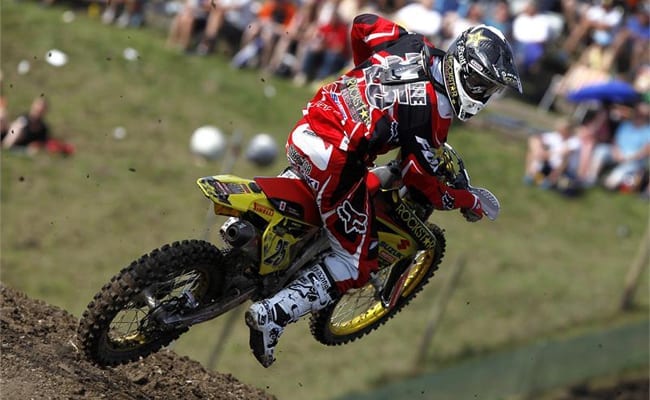 …into Latvia. Rockstar Energy Suzuki World MX1’s Clement Desalle will fly to the capital city of Riga for the Grand Prix of Latvia hopeful of going two in a row at the flat and soft circuit of Kegums for the 10th round of the FIM motocross world championship.

The trip east will be the sixth event from seven weeks in the GP calendar and the last before a well-deserved break for the Belgian team and their two riders. The crew’s home race at Lommel in Limburg will take place at the end of the month. Last summer Desalle went 1-2 in the Latvian motos to earn what was only his second overall victory on the works RM-Z450 in his maiden campaign.

This time the 22-year-old heads to the track less than fully fit but able to enter the GP with more confidence after his podium result (third) last Sunday at Teutschenthal in Germany.

“Even though it has taken some time to accept my bad luck with the injuries I was pretty happy with the result in Germany and to get back on the podium,” says the 2010 MX1 vice champion. “If I can get a good feeling on the bike then I can be fast but at the moment it is hard to say how it will be until I get to the track and see what is possible. We have a good set-up on the bike and I am very happy with it. I’ve been fast at Kegums for the last two years and I hope I can do it again.”

Steve Ramon is still searching for his first silverware of the season and the wait could come to an end in Kegums as the former world champion finished third at the 2010 edition of what was only the second ever Latvian Grand Prix. “I like the track and had a good result last year. Things did not go so well in Germany and I need to turn that around,” he says.

The largely flat but loamy and sandy course has provided a technical test for the GP fraternity in the last two incarnations of the Latvian meeting. After good weather in 2010 the dry track churned into waves of ripples and lines with a hard surface under the top-soil. Usually very grippy, it is hard to judge just how fast the lay-out will be – especially with rain forecast for practice and qualification.

Changeable weather conditions are predicted for the weekend with the chance of showers on Saturday afternoon and sunshine on race day.