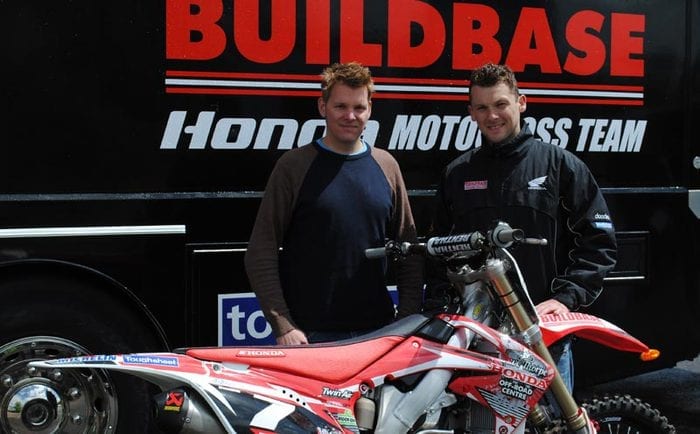 A British motocross legend has stepped up to help Paul Oughton in his mission to smash the Guinness World record of the longest distance achieved on a motocross bike in 24 hours.

Dave Thorpe and his team at the Dave Thorpe Honda Off Road Centre are stepping in with vital support and training for Paul’s hunt of a world record and the raising of much needed funds for the Weldmar Hospice.

Paul who hails from Weymouth in Dorset has been under going a rigorous training regime over the past four months in preparation for the attempt which takes place at the Rogershill Raceway on September 10-11. While attempting this record he is not only looking to raise funds for the Weldmar Hospice but also the International Wings for Life charity, which funds the research of spinal chord injuries.

Four-time World Champion, Dave Thorpe said of the support: “We met Paul through a mutual acquaintance a few months back, and it only came to light a bit later what he was undertaking.

“With the new Off Road Centre now in full swing, and with a great trainer in Stephen Sword on top of the fact Honda are the most reliable motocross bikes in the World, we felt that we were in a great position to help Paul out.

Dave added: “We will be supporting him with both training and bikes for the attempt itself. Paul is also supporting some great charities in doing this attempt and we are glad to help him all we can”.

Paul said of the announcement: “When I was contacted by Dave with his offer of support, I was amazed to say the least, its not very often a four-time World Champion calls you up. I am really looking forward to getting some laps in on the Honda, and to be riding at their Off Road Centre, in Cardiff.

“I used to race against Stephen Sword back in the day and to have him and Dave in my corner is a dream come true,” added Paul.

“Not only that but the full team at the Off Road Centre have been really helpful and supportive and I am hoping to break the record for them as much as for the charities and my family and friends who have been offering me amazing support”.

Stephen Sword, a three-time British Champion and GP regular for 13 seasons recently retired from competitive racing and is now the full time coach at the Off Road Centre, which offers enduro, motocross and taster sessions for beginners to experienced riders, with all bikes and equipment provided at their venue in Ynyswbwl, South Wales – the heart of some of the very best off-road motorcycling terrain in the UK.

Swordy said of the attempt: “I know Paul has been working hard on his fitness both on and off the bike, but he has a big task to achieve so I am looking forward to putting him through his paces to ensure he is as fully prepared both mentally and physically for September”.

The Off Road Centre will be supporting Paul with one of Swordy’s Honda 250F bikes which should give him a smoother ride than his own YZ250 two-stroke that he is currently training on.

For more information on the record attempt visit www.24hoursofmx.com follow on twitter @24hoursofmx or make a donation here.