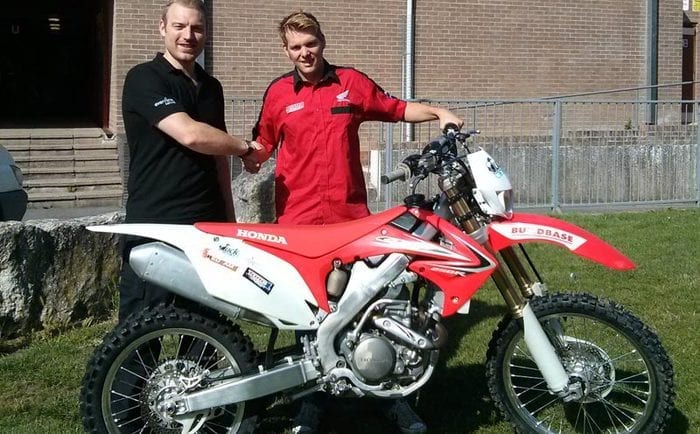 An MX pilot who is attempting to break a Guinness World Record for charity will see his efforts recorded for a TV Documentary.

As we report earlier this summer, Weymouth based Paul Oughton is taking on a record attempt for the “Greatest Distance on a motocross bike in 24 hours” at the Rogershill Raceway near Bere Regis on September 10-11.

And now the record attempt has caught the imagination of Motors TV and the producers of the Blood, Sweat and Gears motorcycle show – the TV show which covers a variety of off-road motorcycle events, and stories.

Each show is aired four times and goes out to 107 countries in 12 different languages. Show Director and creator Paul Minihane said of the coverage: “When we heard about the impressive record attempt Paul was undertaking we felt we really needed to cover it.

“As well as it being for two great charities, it is a very news worthy story and we look forward to covering the attempt itself and some of the training beforehand.”

The attempt is raising money for the Weldmar Hospice in Dorchester, and the Wings for Life charity for the research into Spinal chord injuries.

Oughton, who has been training hard for the record attempt in September, was delighted to announce the coverage: “It is fantastic that Blood, Sweat and Gears will be filming the Record attempt itself as well as the build up. There is certainly pressure on me now, although I am really happy with how training has been going.”

Three-time World Motocross Champion Dave Thorpe and his Honda Off-Road centre are an important part of Paul’s build up to the record attempt with sponsorship that helps with his mx training. And last week Paul had his first ride on the 250 Honda which he will be riding during the Guinness World Record attempt – kindly supplied by the legendary former Champion and his popular Honda Off-Road Centre.

Paul will be heading to the centre in Wales this week to continue to build up his fitness but this time with a film crew in tow. The crew are also looking to visit Paul in Weymouth and will possibly be heading to the Everyone’s Active gym and pool where he trains thanks to their kind sponsorship to cover all angles of his preparation.

Sponsors have been coming in from all over, with opportunities still available for companies and individuals to give as little or as much as they want to by emailing info@24hoursofmx.com or by visiting uk.virginmoneygiving.com/24hoursofmx

You can follow Paul and his record attempt on Twitter: @24hoursofmx and of course DBR will be following Paul as we get closer to the start gate.