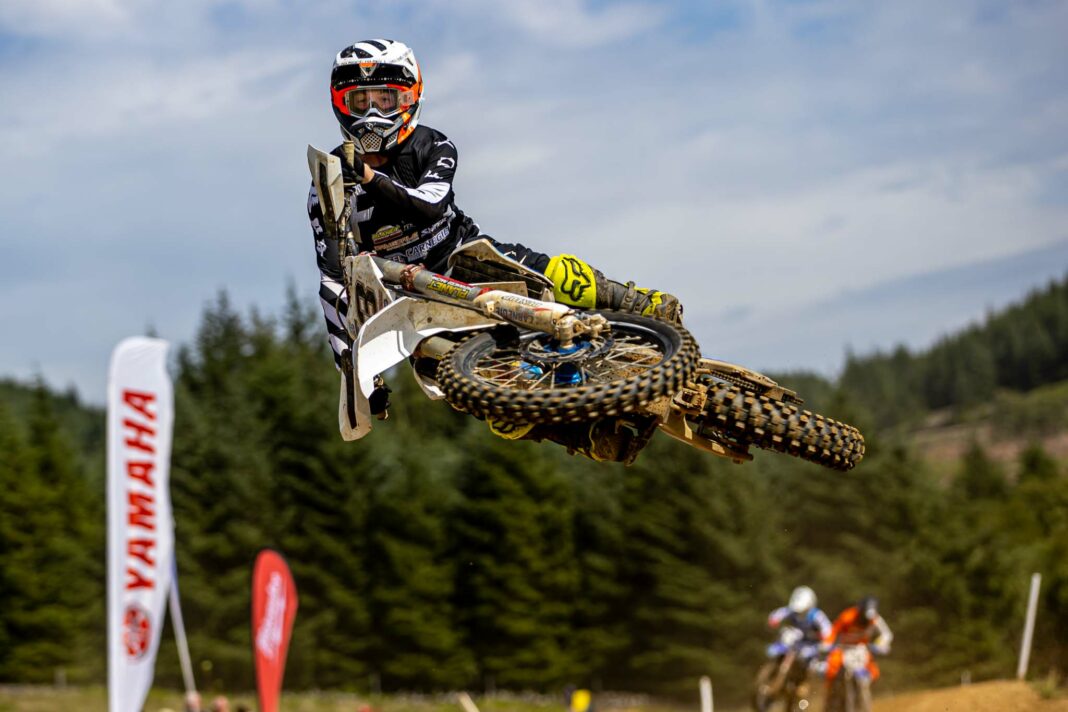 Privateer Ben Edwards claimed the MX1 overall this weekend at round two of the Scottish Championship.

The premier race of the day had the MX1 and MX2 pit their wits and hard pack skills against each other in the joint race. Martin Barr was looking to build on his recent outings and get more bike time working towards full fitness. The track would be a stern test of that.

Tony Craig pushed Barr all the way in qualifying as the Irishman grabbed to pole by 0.1 of a second. The luckless Craig however left the track at one point and smashed his bike into a boulder which wrecked his bike meaning he had to borrow a spare from one of his friends. With Ben Edwards posting some fast times, and the next top seven riders within a few seconds, it would result in some fearsome racing.

Tony Craig blasted out of the furthest gate and narrowly grabbed the hole-shot in race one on a borrowed 450, but it wasn’t long before Martin Barr settled into his usual front running race winning position by lapping fast and consistently. Craig pushed hard every lap to stay in contention and he was right there until the second last lap when Ross “Bunga” Rutherford who had been tailing the leaders took Craig and finished second. Ben Edwards worked hard all race and got passed Kyle McNicol and Jordan McCaw before he got in front of Craig for the final top three spot in race one. With McNicol finishing first in MX2, Lewis Hall was only two seconds behind. Steven Craig would round out the top three in the first MX2 race.

The second race was delayed due to the earlier suspension of racing. As a result, the races were being shortened by five minutes and Martin Barr wasted no time is blasting out front and gapping the field. Lewis Hall meantime battled from sixth to third just as Barr went down hard at the top of the track as he came round a corner and lost his front end. This ended his race and his weekend as he suffered a nasty cut on his forearm and a shoulder injury. As a result of Barr’s misfortune, Ben Edwards was now running first after having already maintaining second the whole race ahead of Bunga, who had McCaw and McNicol battling behind him. Lewis Hall relished the chance of the overall race win as he managed to dive in front of Edwards to get the race win and first in MX2. Ben although second in the race would win the MX1 with Bunga second and McCaw getting third. The next two MX2 places went to McNicol and Steven Craig respectively.

With the chance of the overall win in MX1, Ben Edwards was taking no chances in race three as he blasted to the front and stayed there for the overall MX1 for the weekend. With no Tony Craig to push him in this race due to a DNF in the second and no bike for the third race, it was down to Ryan MacLean to show he still had race pace. A big crash earlier in the day had seen him fly over the bars and bang him up but he still had enough to finish second. McCaw and McNicol would continue their battle, albeit MX1 vs MX2 but very entertaining for the crowd who had stayed in numbers to watch the final race of the day. Bunga, never to be underestimated, had done enough to secure the overall second in MX1. After some hard fought racing, the Irishman Jordan McCaw secured the final podium in MX1 as Ryan MacLean missed out by one point after improving throughout the day. His knee was like a football as he collected his prize money but he’ll bounce back. It was a tough day for Martin Barr and Tony Craig for different reasons but here’s hoping they are back for round three to renew the battle.

MX2 was decided in race three as Lewis Hall’s second place made sure he beat Kyle McNicol to the top step. Lewis grew up riding hard pack at his local track and this had paid dividends. Nice to see his hard work rewarded. It was also a confidence building weekend for McNicol as he relished mixing it with the bigger MX1 bikes. A well deserved podium for Steven Craig as a change of bike has meant a change of fortune for him.

Round three of the ScotMX Scottish Championship, Powered by Milwaukee will be held at Doune nr Stirling, over the weekends of 10 and 17 July.

Scot MX: Craig makes it two podiums in a row at Doune