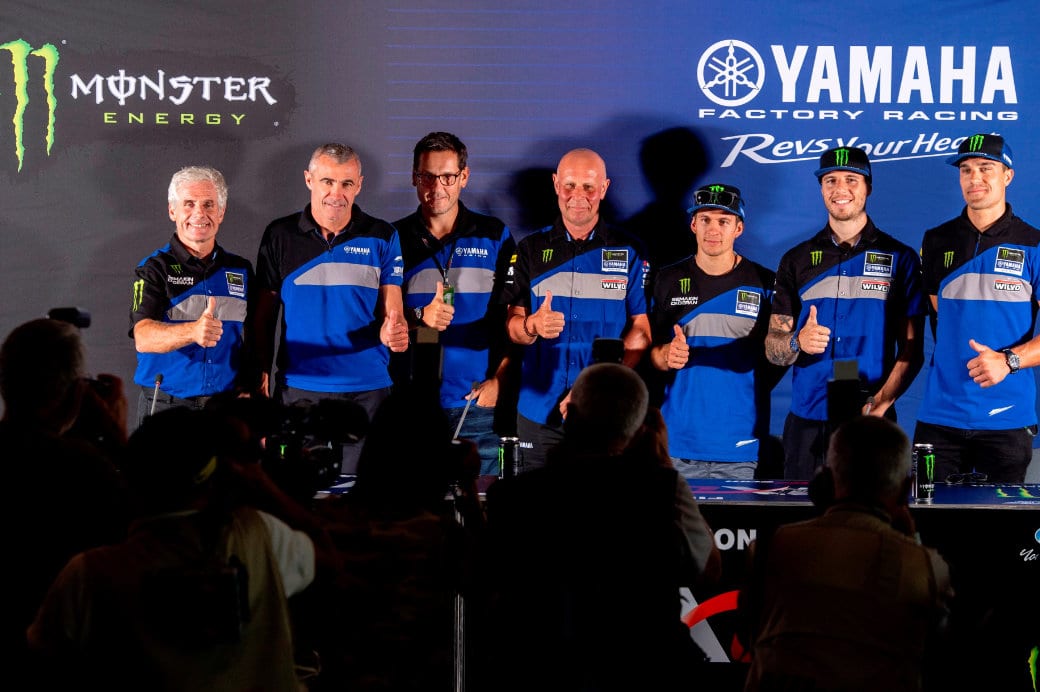 Yamaha Motor Europe held a press conference at the Autodromo Enzo e Dino Ferrari circuit in Imola, Italy, ahead of the 15th round of the Motocross World Championship to officially announce its strategic racing plan and new team structure for 2020.

With motorcycle racing of all levels being the driving force behind Yamaha’s racing strategy, Yamaha Motor Europe is constantly working to strengthen the Yamaha Racing Pyramid; a proven strategy that has been constructed to provide a smooth progression for young riders coming into the world of racing, from entry-level all the way to the top, MXGP and MX2.

The bLU cRU program is the base of the Racing Pyramid. It supports riders that wish to take the step in their early careers by creating a bridge between national and international level racing. As a symbol of this strategic approach, Yamaha Motor Europe reached a three-year agreement with FIM Europe that will see 120 of the fastest and most promising bLU cRU riders line their YZ65, 85 and 125 motorcycles up at one of the most prestigious motocross events of the year. This year it will be the Monster Energy FIM Motocross of Nations in Assen, The Netherlands.

From this event, fifteen riders will progress to the bLU cRU Masterclass – five in each category, 125cc, 85cc and 65cc, where one rider in each discipline will win support from Yamaha Motor Europe for the following European Motocross Championship season. For the YZ125 bLU cRU FIM Europe Cup winner, he or she will be placed on the Official EMX125 team, which is a team that is another step higher on the racing pyramid.

Moving up the pyramid, the second step is made up of Yamaha’s Official EMX125 and EMX250 teams. These teams introduce the next generation of racers to the highly competitive world of elite motocross by racing at the European rounds of the FIM Motocross World Championship. These teams cultivate and feed talent to the top two tiers of the pyramid, MX2 and MXGP.

As a result of the successful relationship between Yamaha and Monster Energy, Yamaha Motor Europe has been able to increase its commitment to the MXGP and MX2 teams. This has enabled the riders to achieve some impressive results. Since 2015, Yamaha’s top-level teams have accumulated 35 race wins, 98 podium finishes and 17 Grand Prix wins.

For the past 28-years, Yamaha’s Factory set-up has been led by Yamaha legend Michele Rinaldi. A lot of the aforementioned success can be attributed to Rinaldi’s influence, not only as a Team Owner and Manager, but also as a technical partner and development leader for the Yamaha Motor Company in Japan.

In 2020, Rinaldi and his highly skilled team will focus on the research and development of Yamaha’s Factory YZ450FM and YZ250FM motorcycles from the team’s headquarters in Parma, Italy. Some of his best technicians will travel to all rounds of the FIM Motocross World Championship to support the new Factory MXGP and MX2 teams onsite.

Rinaldi will remain at the helm of the Yamaha Factory R&D unit. He will also be a key member on the Yamaha Motor Europe Racing Committee, where his valuable knowledge, years of experience and advice will be used to guide Yamaha’s future racing operations.

As a professional, passionate and results-driven team that shares Yamaha’s philosophy in every aspect, from the start of 2020 the Monster Energy Wilvo Yamaha MXGP Official Team will become the new Monster Energy Yamaha Factory MXGP team. The team led by Louis Vosters will be based at the spectacular Wilvo Yamaha workshop in Bergeijk, The Netherlands.

The team will retain its current contingent of riders, Gautier Paulin and Arnaud Tonus, and will be bolstered by a third rider in the form of Jeremy Seewer. All four riders currently make up the top-four in the 2019 MXGP World Championship Standings, with Seewer leading the way in second position, 37-points clear of Paulin in third, and a further 43-points clear of Tonus in fourth.

Strengthening Yamaha’s upgraded racing strategy, the Monster Energy Kemea Yamaha MX2 Team owned by Hans Corvers will be morphed into the Monster Energy Yamaha Factory MX2 Team. The team will line-up in 2020 with the same talented riders from this season, Jago Geerts and Ben Watson.

Yamaha Motor Europe Marketing and Motorsport Division Manager Paolo Pavesio: “Changing a structure that has proven to work is always a challenge, however the only way to remain competitive and to be capable to evolve is to maximize the potential of all available resources. The experience Michele and his crew have developed in those decades, together with together with the growth of support from Yamaha Motor Company in Japan, will secure our new Factory Team riders in MXGP and MX2 the best Yamaha MX racing package. I therefore would like to thank him, Louis and Hans for the energy they are already putting in the new organization… while of course we are all concentrated on finishing the current season as protagonists.”

Yamaha Motor Europe Off-Road Racing Manager Alexandre Kowalski: “2020 will be an exciting year for Yamaha with two Factory teams, and with Michele Rinaldi still at the heart as the lead developer of the YZ450FM and YZ250FM bikes. I have full confidence in the teams and the riders we have going into the 2020 season. We have secured a strong line-up to challenge the MXGP and MX2 crowns, with Jeremy Seewer, Gautier Paulin and Arnaud Tonus in MXGP and Jago Geerts and Ben Watson in MX2.

“I am really happy to keep Jeremy Seewer inside the Yamaha Family for a third year. He is still really young and has already made incredible progress as he looks to finish his second season inside the premiere class as the vice World Champion. He will be strengthened by teammates Arnaud Tonus and Gautier Paulin. This year, Arnaud has had the best season of his MXGP class career, while Gautier has also been strong as the rider that is currently third in the championship standings. All three riders are inside the top-four which confirms Yamaha’s strength inside the MXGP class and the capabilities of the YZ450F.

“In MX2, Jago has had an incredible second season and is booming as a youngster on the rise. Ben has also proven his skill-set many times throughout the season and fits perfectly into the MX2 team. There is a really positive atmosphere within the teams with these five riders and it is a pleasure to have them all back onboard with Yamaha for another fantastic season. I really look forward to seeing what we can achieve.”

Monster Energy Yamaha Factory MXGP Team Owner Michele Rinaldi: “We’re starting a new chapter of what has been an amazing tale that started a long time ago. When I first started out, my ambition was to start my own team, and I did this, with Yamaha since 1992. Since around 1998, I started to work directly with the manufacturer and with the development of Yamaha’s YZ motorcycles, while managing my own team. Over the years, my relationship with Yamaha in Japan and in Europe has developed to the point that I have been able to represent the manufacturer more than before, providing a service and support to the company. So, the story has gone from running my own team to starting our own development, and now it’s the time for the next chapter. A time for change where we will represent the manufacturer more than ever before with a focus more on being a support network and stepping away from running my own team. This is certainly a big change, also for my staff who have made all of our achievements over the years possible, but I am optimistic for the future where together we will make the most from this new adventure.”

Monster Energy Wilvo Yamaha MXGP Team Owner Louis Vosters: “Since the beginning, I had the intention to build a long-term relationship with Yamaha as they have a strong strategy and a great racing philosophy that fits perfectly with our team. Like us, they also look to build strong long-term relationships, which I like. For my team to reach Factory status is an incredible feeling. I really look forward to the future, to working with the Factory bikes, and with Michele (Rinaldi) and with the Japanese technicians as well. For me, it’s like a dream come true and an enormous step for us as a team.”

Monster Energy Kemea Yamaha MX2 Team Owner Hans Corvers: “We have been with Yamaha for 23 years. We started the KEMEA team in 1997, so we are nearing a 25-year celebration, but we get to celebrate a little bit earlier with the announcement that we will become the new Factory MX2 team in 2020. I am really happy with that, and I am extremely thankful to many people throughout the years who have helped the team get to this point. We have a goal of fighting for the world title, as everybody wishes for when you are racing at this level, and we are getting closer to that. I am sure that in the last 15 years it has been extremely difficult for any satellite team in MX2 to clinch the title. It is so important to have Factory support, so this transition has allowed us to take one step toward our goal and with this I hope we can challenge the for the victory in 2020.”