We’ve made it! The 20th and final round of MXGP for this year with two new world champions crowned, Jeffrey Herlings wrapping up the MXGP championship a round early at Assen and Jorge Prado wrapping up the MX2 with a press release in the week to announce that his only remaining rival Pauls Jonass, was out with a damaged knee.

Although the championships were decided there was still plenty of British interest with our ‘Nations team of Tommy Searle, Max Anstie and Ben Watson all in good form and the remaining Brits, Graeme Irwin, Shaun Simpson, Adam Sterry and Conrad Mewse all healthy and looking to end on a high.

The WMX concluded without a British entry, won by Kiara Fontanesi for the umpteenth time and in the 125 class there was something different – the YZ125 blu cru superfinal is an invitation race for the highest placed Yamaha 125 riders in their respective national championships. Joel Rizzi and Sam Nunn got their invitations and made the long trip south, the prize for winning is a guaranteed ride next year with all the Yamaha teams scouting the riders.

But the main British interest lay with Brad Anderson. The 2017 EMX300 champ was looking to clinch his second title having led all season but faced a strong challenge at home and abroad from GL12 rider Mike Kras who had already taken the British 2-stroke championship. Ando had a 27 point advantage but was also dealing with a broken finger and bruises from Cusses Gorse as well as a dodgy knee that he injured at Matterley – would the tough-as-nails Northerner be able to hold on to the title?

The hardpack dirt soon formed into a typical Italian track, hard and dusty without as many ruts as usual for an MXGP track. In timed practice, Simpson was third fastest, with Anstie 10th, Searle 12th and Irwin 21st.

That pace translated into similar positions in the qualifying race, Simpson losing a spot on the last lap to his team-mate to finish seventh. “I spun up going into the whoops and that was enough for him to get past,” Simpson explained.

Simpson was the best-placed Brit with Anstie 13th, Searle 15th and Irwin 22nd in a very uneventful race – everyone seemingly unable to push the pace off line to make a pass. Irwin summed it up well. “I had someone in front of me for the whole race but there’s so little in it that I couldn’t get past.”

The only drama involved was with a certain famous Italian, as Cairoli blew out the berm next to the pit lane and high-sided into the ground. He looked to be in a lot of pain and would not race on Sunday to the dismay of the adoring partisan crowd.

On Sunday it was a mixed bag for the Brits. First, the bad news. Graeme Irwin crashed in the second race, breaking his right wrist. It was a devastating blow to Irwin with the MXoN and final British championship in the next two weeks.

Bad starts and crashes made life difficult for two-thirds of our British ‘Nations squad. Anstie had the poor starts that limited his progress to a ninth and 13th, clinching 10th in the championship and highest placed Brit.

His MXoN team-mate Searle had terrible starts and a crash in race two so 12th and 16th was better than it sounds. I thought he had one of his best races this year in the second outing, determined and hard riding. “I didn’t get the starts but rode okay, I need to work on it during the winter, I’ve struggled all year and made it hard for myself,” he admitted. “I hit someone in race two and [Todd] Waters hit me, I wanted to catch him!”

I asked about the MXoN and said I’d noticed he’d stayed off social media this year. “I don’t look at social media, just focusing on myself,” he added. “I’m healthy this year, I’m really looking forward to it with no negativity.”

Finally Shaun Simpson. After a turbulent season he’s finally riding like we knew he can. Two seventh places made it his second-best MXGP this year (Assen two weeks ago was his best) but he wasn’t happy after running in fourth for much of race two. “I’m feeling a bit under the weather but I don’t want to use that as an excuse, I just ran out of steam,” he said. “I had a good pace that I knew I could keep but the guys just got me, I’d used a lot of energy in the first race battling Lieber. The track’s not that rough but it’s pretty gnarly.”

The time differences in MX2 are always small, this weekend just 0.04 of a second split Watson and Mewse in fifth and sixth with Sterry unable to get a clean lap and back in 23rd but only two seconds behind Mewse.

Qualifying started with a Watson holeshot, Sterry in 13th and Mewse on the floor in the fifth turn. “I had a bad start and just came in a bit hot and hit someone’s wheel,” was his explanation. A second crash mid-race meant he would finish in 24th. Sterry looked tentative, the dusty, hardpack not his favourite surface while Watson lost a place to Prado on the second lap but stayed in a comfortable second place to the flag.

Unfortunately, none of our boys had the races they would have liked to end the season with. Watson went 8-17, bad starts hindered him, a stall in race one and a crash in race two meant he had is worst race results this year a part from the DNF in Czecho, but still enough to clinch fourth in the championship. Congratulations Ben, you certainly came of age this year.

Sterry was still struggling with his ankle, 21st and 14th not what he wanted. “I shouldn’t really have ridden, my ankle is far from 100 per cent,” he said. “The first race, I was feeling okay but I hit my foot in a rut and was in so much pain. I went out in the second race and just rode around, it hurt so much. I just need to give it time to heal properly, nothing I can do, just rest.”

Sterry finished the championship in 13th, tied on points with Mewse who got the tie break in 12th.

Mewse crashed in the first corner in race one. “I didn’t shut off, I was aiming for the big berm around the outside but my front just washed, and couldn’t get into the points,” Mewse explained. “Then I struggled to 18th in race two – just out of sorts.” The only bright spot was a renewed contract with his team for next year.

Ando was struggling. No doubt about it. He would need two seventh-place finishes to guarantee the title and was seventh in timed practice. His dad told me it was damage limitation, he would be going for the title not the race win.

Race one on Saturday started at 17:50, the bright, winter sun already low and casting long shadows that made the track difficult to read. Honorary Brit Mike Kras did what he needed to do, holeshot and win without being challenged – it was up to Ando to do his bit now.

Starting in third he wasn’t shown any mercy as his title rivals slipped by, dropping him to seventh at one stage. With some breathing space behind he began to settle down but you could see his timing was slightly off, landing short on some of the jumps.

He got some luck when Kovar’s chain snapped and made a pass on the last lap to grab fifth. His points lead was cut to 18, he would need 13th to guarantee the championship in race two.

I spoke to him in the start box and he was nervous. Kras led from the start, Ando was seventh but his lap times were two seconds slower than his rivals as he lost a couple of places – now ninth. There was breathing room again, but not much and the next 20 minutes probably felt like the longest of his life. As Kras celebrated the double race win Ando crossed the line. He’d lost the battle but won the war – EMX300 Champion 2018. 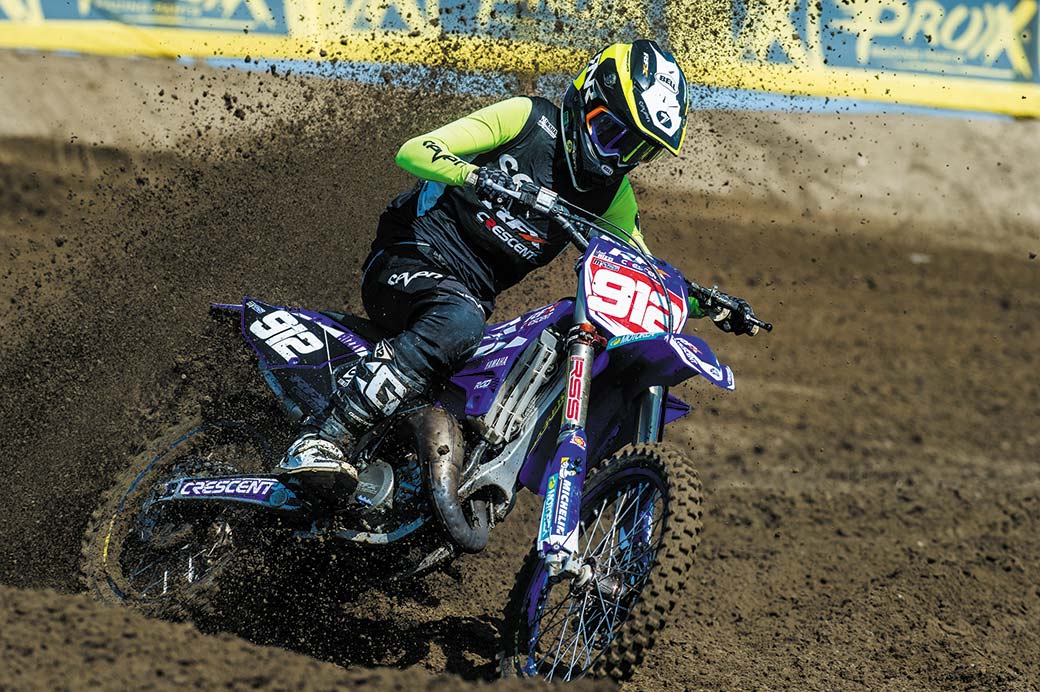 A full gate of YZ125’s isn’t something you see too often, especially with all the riders in identical kit. With all the boys on equal machines, it was a good test of their riding ability.

Joel Rizzi made it a weekend to remember, third quickest in free practice but taking pole in timed practice he would transfer that speed into two second-place finishes, leading race two for a couple of laps. Sam Nunn impressed too, 26th in the first moto but a strong sixth in race two. Rizzi enjoyed the experience, especially the feeling on the podium.

The MXGP and EMX championships are all finished for another year but there’s the small matter of Europe versus America, MXGP versus AMA, Herlings versus Tomac to sort out before we batten down the hatches for winter. The Motocross of Nations from RedBud next weekend. I’ll be there as a fan, so until next year thanks for reading my reports, I hope you’ve enjoyed them but for now I’ll say goodbye.