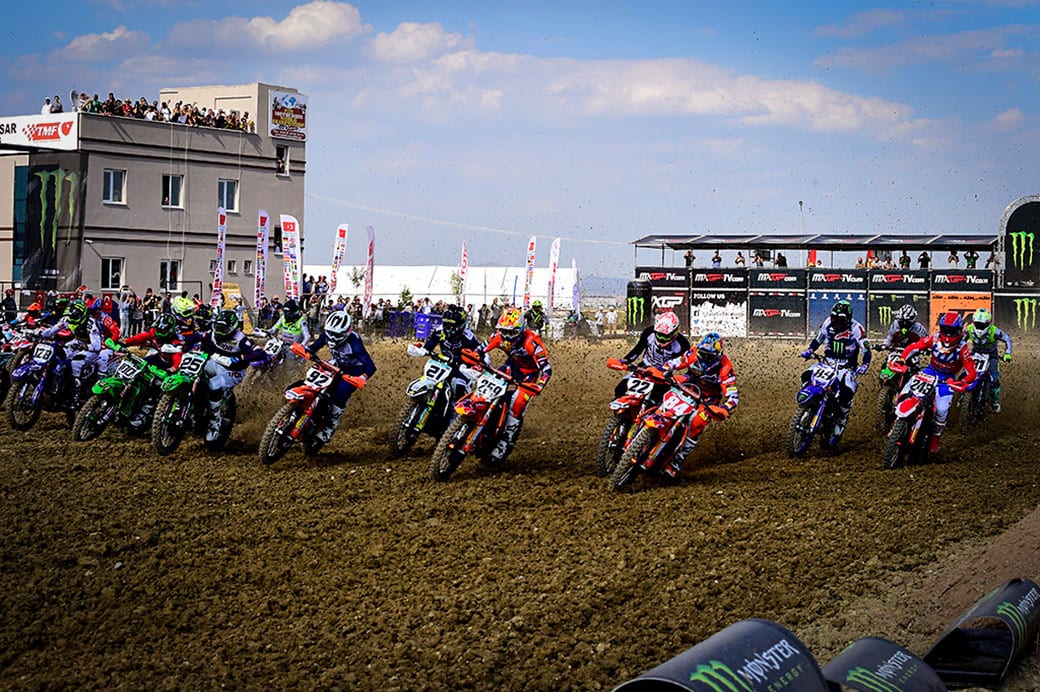 The 17th round of the 2019 FIM Motocross World Championship heads to Afyonkarahisar for the MXGP of Turkey this coming weekend, before the series takes to China for the final round and while the MXGP and MX2 championships have been decided, this weekend we will find out who the EMX2T Presented by FMF Racing and the WMX champions will be.

The FIM Motocross World Championship visited the hard pack circuit of Afyon last year for the first time with a great success.

WMX leader is Bike It DRT Kawasaki’s Courtney Duncan who won the last round in Imola, Italy, with 1-1 scores, she holds a 23-point lead going into Turkey. Second in the championship is Larissa Papenmeier and No Fear Yamaha team’s Nancy Van De Ven is third, both have a shot at beating the New Zealander, but it won’t be easy.

In the EMX2T presented by FMF Racing championship Verde Substance KTM team’s Brad Anderson and Ecomaxx Fuels Mike Kras are equal with 235 points each, so this final round will be exciting to say the least.

In the MXGP class, Standing Construct KTM’s Glenn Coldenhoff is going for his third straight Grand Prix victory, which is rather amazing and perfect preparation to lead into the Monster Energy Motocross of Nations at Assen at the end of September. Coldenhoff finished seventh in Tureky in 2008.

Team HRC’s Tim Gajser felt very comfortable in Afyon in 2018 managing to finish second on the brand new track. It looks like the Slovenian continues his road to win GPs, despite already wrapping up his MXGP championship in Imola, so he might have something to say about Coldenhoff getting the triple treat. Gajser, who came close in Sweden for the GP win, wants to head to China for the final round with as much momentum as possible.

Monster Energy Yamaha Factory MXGP’s Jeremy Seewer remains second in the MXGP points standings, but without a GP win in 2019, you can be sure his goal is to stand on the top of the box in Turkey. Seewer had a decent 6th position in Afyon last year and he enters the weekend with 43 points ahead the Yamaha mate Monster Energy Wilvo Yamaha Official MXGP’s Gautier Paulin who actually appreciated the Turkish tracks a lot finishing 4th in 2018 and second in the 2009 edition in Istanbul in MX2 class.

Monster Energy Wilvo Yamaha Official MXGP’s Arnaud Tonus has had a great season so far and will enjoy the hard surface at this round even if it’s a new challenge for the Swiss who did not attend the MXGP of Turkey in 2018.

While Rockstar Energy Husqvarna Factory Racing’s Pauls Jonass and Arminas Jasikonis are also showing good form at the moment, so don’t be surprised if they battle up front this coming weekend. Jonass, who had his second MXGP Podium in Sweden, enjoyed the Afyon track a lot last year while he was still fighting for the MX2 title, finishing second overall in MX2.

Red Bull KTM Factory Racing’s Jeffrey Herlings, who was back in the Championship in Sweden, admitted how he loved the Afyon track and he showed with an impressive win in 2018. The Dutch rider might not enter the MXGP of Turkey to increase the points’ gap this year but he is still far from done fighting to give his best and win the penultimate GP of the season.

Red Bull KTM Factory Racing’s Jorge Prado scored his second consecutive MX2 championship at the last round in Sweden, but like Gajser, he is still motivated to add to his GP tally. The other Red Bull KTM Factory Racing rider Tom Vialle is coming off his first ever Grand Prix win in Sweden, and no doubt will want to stop his Spanish team-mate the chance to get the win in Turkey. Prado attempted the Afyon track in 2018 finishing 6th while for Vialle this is a new challenge.

Rockstar Energy Husqvarna Factory Racing’s Thomas Kjer Olsen comes to Turkey after having not his best GP in Sweden and he is certainly looking to finish on the podium after his third position last year.

Monster Energy Kemea Yamaha Official MX2’s Jago Geerts is currently third in the Championship 7 points ahead of Vialle and will use the penultimate and final rounds of the Championship to ensure the bronze medal while his team-mate Ben Watson is forced to miss the remainder of the season due to his broken wrist.

Team HRC’s Calvin Vlaanderen has been consistent the whole season and he won his first race of the season at the last GP in Sweden which was enough to ensure another second overall. Vlaanderen crashed hard last year in Afyon but managed to regroup and finish 10th. You can bet he will line up in Turkey with the best expectations.

F&H Racing Kawasaki’s Adam Sterry is also looking to continue his good form as a potential selection for the British MXoN team, which will be announced in this coming week and he wants his name on the team for the Assen event.