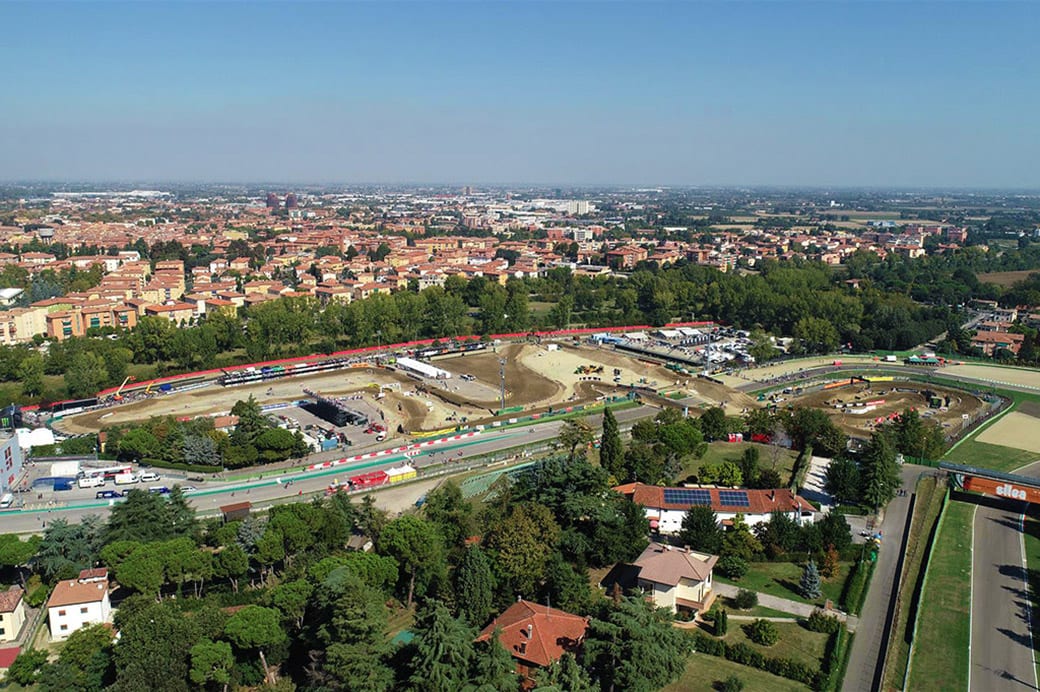 Round 15 of the 2019 FIM Motocross World Championship will head to Imola, Italy this weekend for the second year in a row. The MXGP of Italy will take place at the historic world-famous Autodromo Enzo and Dino Ferrari that last year hosted the final round of the MXGP Championship.

This year the outstanding circuit will show some slight changes which will offer an amazing racing experience to riders and breathtaking show to spectators.

It might not be the final stop of the Championship but this weekend the MXGP class may celebrate his Champion, Team HRC’s Tim Gajser only need to score 13 points over Monster Energy Yamaha Factory MXGP team’s Jeremy Seewer to take his third title. While in MX2 Class Red Bull KTM Factory Racing’s Jorge Prado is heading to Imola not only with an impressive 2019 season in his pockets but with the good memories from last year when he won his first MX2 World Championship title.

Joining the MXGP and MX2 classes in Italy will be the penultimate rounds of the EMX2T Presented by FMF Racing and the WMX Championship. In the EMX2T Presented by FMF Racing it is Mike Kras from Team Ecomaxx Fuels who has the championship lead from Verde Substance KTM’s Brad Anderson. Kras with 199 points and Andersons with 197 points keep the championship still wide open and the battle is bound to be once again close between these two rivals.

Meanwhile, in the WMX championship it is BIKE IT DRT Kawasaki’s Courtney Duncan who showed amazing speed in the last round in Loket, where she went 1-1 for victory. Her championship lead is now 14 points ahead of Nancy van de Ven. Another solid performance by Duncan in Italy could make it difficult for the Dutch women to climb back into championship contention.

The Imola circuit will also host the inaugural FIM E-X Bike World Cup in a unique combined race taking place on Saturday 17th August where 4 final winners will be crowned World Cup winners. Motorcycles heroes such as Marco Melandri and Davide Guarneri will take part at the first-ever E-Bicycle race on a motocross track. The event will be broadcasted LIVE on Facebook and MXGP-TV.com on Saturday 17th August at 18:35 for free.

In MXGP Class Team HRC’s Tim Gajser expects the champagne to be flowing in Italy this weekend, as he should be crowned MXGP World Champion for the second time in his career, while he won a title also in MX2 in 2015. Gajser seems unstoppable, and his victory in Lommel for the first time proved he can win on any surface. Expect him to be lifted to the podium in front of his Slovenian adoring fans.

While Gajser is positioning better than ever, the rest of the field is yet to be decided, Monster Energy Yamaha Factory MXGP team’s Jeremy Seewer is second in the championship and he would love to finally get a GP victory and Italy might be the place to do it. He lines up expecting nothing less than a podium and another runner-up championship result, to go with his MX2 Championship second place in 2017.

Another rider with a shot at a GP victory in Imola will be teammate Monster Energy Yamaha Factory MXGP team’s Romain Febvre, who took his first Grand Prix win in two years in Loket circuit in the Czech Republic. For Febvre is going to be the first time to be racing at Imola as he missed the last season’s debut due to an injury but looking how fast he was in the last round in Lommel is not in doubt he can easily adapt to this new track even if the surface is different than the one in Lommel.

Of course, Monster Energy Wilvo Yamaha Official MXGP’s Gautier Paulin is third in the championship and remains one of the most solid performers in recent years while his teammate Arnaud Tonuswho sits just 6 points behind the Frenchman has been strong and focus this season. Tonus missed the MXGP of Italy last year while Paulin was 5thin Imola in 2018.

Standing Construct KTM team’s Glenn Coldenhoff came off strong performances in Lommel with his first podium of the season and with no doubt he is looking to put solid races together in Italy, as will his teammate Max Anstie who lately announced he’ll not be part of Team Standing Construct for next season. Teammate Ivo Monticelli has one of his best seasons this year especially at the Italian GPs, he is looking forward to racing in front of his home crow.

Rockstar Energy Husqvarna Factory Racing riders Pauls Jonass and Arminas Jasikonis are sitting 10thand 6thin the Championship standings respectively with Jonass, who saw some ups-and-downs this season, is approaching the Imola circuit for the first time as he missed it last year in MX2 class while Jasikonis, who showed some of his best results this season, is keen on repeating his solid performance of Lommel.

Gebben Van Venrooy Kawasaki’s Alessandro Lupino, who was forced to withdraw from the Belgian GP due to some technical issue at the bike and his slow recovery after the injury from the MXGP of Russia, is going to be back in Imola keen of competing in front of his home crowd.

While Red Bull KTM Factory Racing’s Jorge Prado isn’t likely to be crowned MX2 champion this coming weekend, he can go a long way to setting up a World championship celebration a week later in Sweden. Now 124 points ahead of Rockstar Energy Husqvarna Factory Racing team’s Thomas Kjer Olsen, the Spaniard is without question unbeatable, winning every single GP he has ridden in 2019, and likely Imola won’t be any different. If that is the case, then his second MX2 World title is just around the corner while Olsen, who was second at the MXGP of Italy in 2018, had a difficult GP in Lommel after a crash in race 1 and he had luckily some time to catch up before Imola.

For Monster Energy Kemea Yamaha Official MX2’s Jago Geerts bad luck in Lommel will make him motivated in Italy to recover. One of the few who have been able to show Prado a defeat this year with 1 race win, but the Belgian rider will not only want to get on the podium again, and very soon but he will also wish to reclaim his third position in the standings as he’s not 3 points behind the MX2 rookie Red Bull KTM Factory Racing’s Tom Vialle who is riding surprisingly this season on all types of surfaces.

Team HRC’s Calvin Vlaanderen looked good last round in Lommel making the top three and climbing the podium once again. Vlaanderen along with F&H Racing’s Henry Jacobi and his teammate Adam Sterry and the other Lommel podium man Monster Energy Kemea Yamaha Official MX2’s Ben Watson will be looking to improve their championship standings.