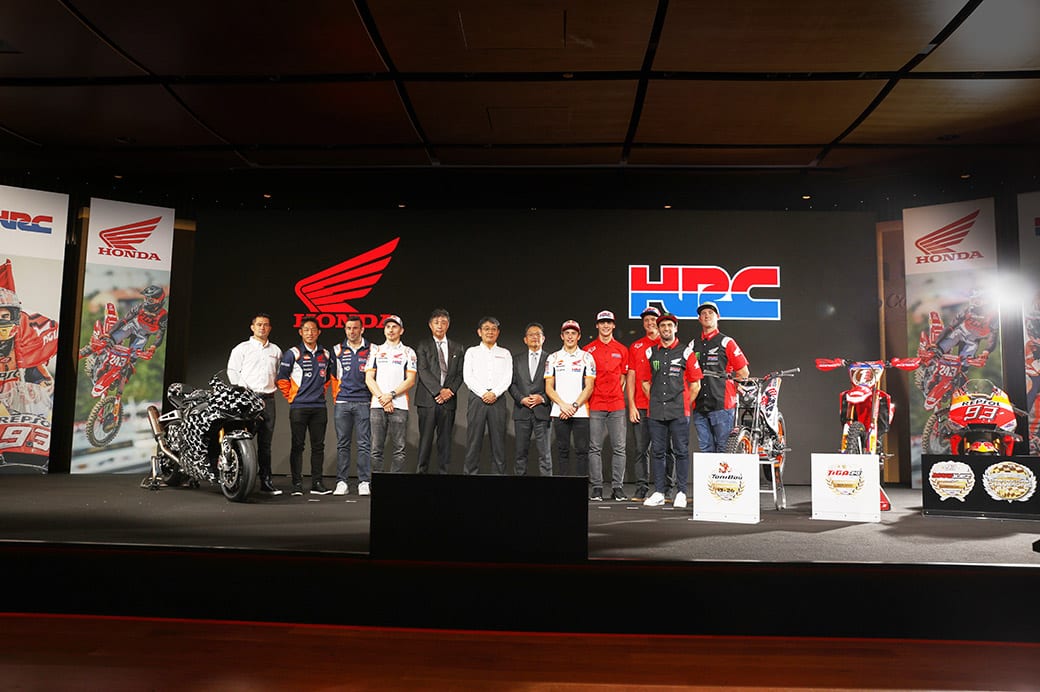 After his World Championship success in 2019, Tim Gajser will once again be on-board his Honda CRF450RW as he attempts to defend his crown with a back-to-back MXGP world title in 2020.

Joining him under the Team HRC awning is Australian youngster Mitch Evans, who has signed after an impressive rookie season racing the MX2 world championship.

For Gajser, he’ll be hoping for more of the same after finishing a season that saw him take nine out of a possible 18 overall victories. This included a record-breaking seven in a row, which allowed him to win the title by a massive 202-point margin.

He was victorious at the Belgian GP in the deep sands of Lommel, which showed just how much the Slovenian has improved in all aspects of his riding this year and he was also able to win his class at the Motocross of Nations and put in an extremely impressive fifth overall at the Monster Energy Cup against the best supercross riders in the world.

However now, he knows the hard work must continue as he looks to defend his crown in what will be an extremely competitive MXGP class in 2020.

Amongst those lining up with him on the start gate will be Mitch Evans, who steps up onto the Honda CRF450RW as his whirlwind career path takes him onto Team HRC.

Under the tutelage of Team Honda 114 Motorsports’ Livia Lancelot last year, Evans was able to get an MX2 podium on his very first outing at the MXGP of Patagonia-Argentina which he then backed up with another podium at round six in Portugal, where he got his first taste of leading the field. While injury meant he then missed almost a third of the season, he was still able to finish in 11th place in the championship, with only five riders having more podium placings.

For 2020 though, Evans will swap his Honda CRF250R for the title-winning CRF450RW as he steps up into the MXGP class, joining gold medallist Tim Gajser under the Team HRC awning.

While Evans doesn’t turn 21 until the November 10, he is experienced on 450cc machines, having ridden them in Australia in 2018, where he finished runner-up in the MX1 class in what was his rookie campaign. It was this result, coupled with his excellent showing on a 450 at the 2018 Motocross of Nations in RedBud, USA that convinced Honda to sign him to the world championships last year.

After a year learning the ropes and seeing how the MXGP series operates, Evans will begin his preparation on a 450cc machine that many experts believe he is truly suited to. Once the EICMA show is completed, he will move full-time to Milan to work with the team over the winter to get him prepared for the season ahead, which begins with the MXGP of Great Britain on March 1st 2020.

Tim Gajser: “I am very much looking forward to this new season with Team HRC. Of course last season was great and I have a lot of good memories but now I must start concentrating on what is ahead and preparing myself to put in a lot of work for 2020. I know we have an excellent bike, with the CRF450RW so that allows me to really focus on myself because this year showed that I could win with that bike in any conditions. However next year will be even tougher and that’s what I need to prepare for, as defending the title isn’t going to be easy as there are a lot of fast guys in the class but I know what I have to do and I believe I am in the best team to do it.”

Mitch Evans: “It is just amazing to be signing for Team HRC. The history that this brand has with all the great riders who have ridden Honda’s and to now be a part of that, it is unbelievable. This is something that you grow up dreaming about when you first swing your leg over a dirtbike, to be under the HRC awning riding a full-factory CRF450RW. I really can’t wait to get started and I am really looking forward to showing people what I can do in the MXGP class. I know it won’t be easy because there are a lot of talented people in the class but I’ve got the best possible teammate with Tim, because he’s the world champion and he knows exactly how to go about things. I hope to learn a lot from him and from the team and use all of that to put in my best performances when the season starts. Now though, it’s time to knuckle down and put in work so that I can come out swinging in round one.”

Marcus Pereira de Freitas: “Of course it is great news to have Tim with us again for next season. He is a pleasure to work alongside and this year was just great for everyone involved in the team. We know that trying to do the same again will be tough but everyone, including Tim, is prepared to do everything necessary to try and make it happen.

“We are also very excited to have Mitch join us for the 2020 season on the Honda CRF450RW. We know that he can ride a 450 well, after his showing at the Motocross of Nations in RedBud when he was just 19 years old, so it is great to have him under our awning for next year. However, while the world championships start in March, he knows he has to do a lot of training to do before that in order get ready for the 20 round series on this bigger machine. His rookie season last year had some positive results and he now knows a little of what to expect with the tracks and the conditions so that will help, but of course he will have a whole team around him, supporting him and making sure he is able to go out there and deliver some good results for Team HRC.”