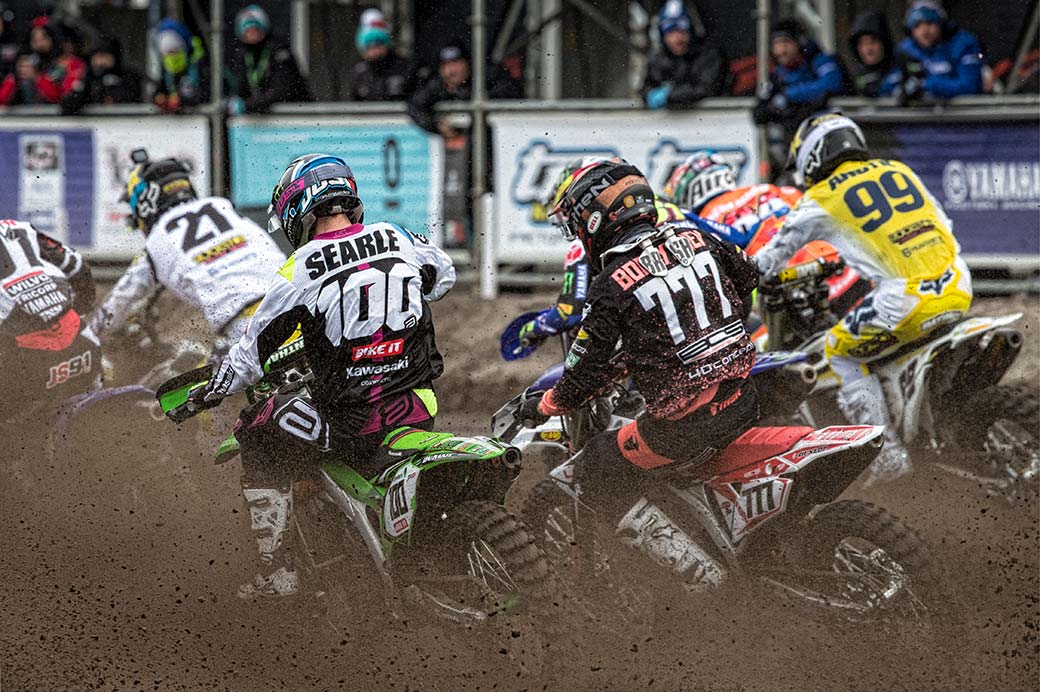 Artic like conditions plagued the MXGP of Europe at Valkenswaard in the Netherlands this weekend. Heavy rain late last week saturated the sandy circuit before sub-zero temperatures tested the riders resolve throughout the weekend.

Saturday’s qualification day saw the worst of the snow, with sections of the Dutch circuit being carpeted in white. This made for deep and treacherous conditions. Evgeny Bobryshev was able to slot his BOS GP machine into eighth place to bag himself a top 10 grid position heading into Sunday’s main motos.

When the gate dropped for moto one on Sunday afternoon Evgeny Bobryshev found himself flirting with a top 10 position as the pack entered the first corner full throttle. In the melee of the first turn, Bobryshev was caught in carnage as a number of riders, including Tommy Searle, hit the deck hard in the wide-open section.

Fortunately, Bobryshev was able to remount his steed, albeit at the very back of the pack. The big Russian would spend the next 10 minutes fighting through the tough conditions to break back into the top 30.

With 20 minutes left on the clock, Bobryshev was locked in a back and forth battle with Jose Butron. This battle endured for a number of laps, however, Bobryshev was eventually able to break free to continue moving forward through the pack.

The BOS GP pilot continued charging hard until the final moments of the race and was able to pick off both Lars Van Berkel and Alessandro Lupino to move into 23rd position on the last lap.

Race two started a lot more positively for Bobryshev, he was able to avoid any first corner carnage this time around to complete the opening lap in 13th position with Max Anstie and Max Nagl flanking him on either side.

Bobryshev took advantage of mistakes from both Tim Gajser and Jeremy Van Horbeek to advance into 11th position on lap four.

With 20 minutes to go Bobryshev was embroiled in an epic four-man battle with Arminas Jasikonis, Kevin Stijbos and Max Nagl. This battle endured for the better part of 10 minutes, Bobryshev dropped a couple of positions in the process.

Luck wasn’t on the side of the Russian in the Netherlands, a snapped crankshaft not only expelled Bobryshev from the battle for a top 10 position but from the race completely. After a disappointing weekend, Bobryshev will regroup to take on RedSand for round three of the MXGP world championship this weekend.

“Saturday was a good day for me. Finishing in eighth gave me a good position for the gate pick,” said Bobryshev. “We were obviously still looking for the right settings for the bike over the weekend, particularly because the track was so different on Sunday. Youthstream did a great job on Saturday night to prepare the track. So the track was a lot less muddy on Sunday and more high speed as Valkenswaard usually is.

“But unfortunately, my Sunday wasn’t so solid. I crashed with a group of riders on the start and damaged my bike, I had no front brake. I made a few mistakes later on as well so I couldn’t come back through the pack to the points positions. For sure I wasn’t happy about that but I tried to look at the positives, I stayed in one piece and had nothing wrong, no injuries.

“I was running around the top 10 in the second race but after 10 minutes I realised I had an issue with the bike. I had to stop because the bike could not continue. I was sad to walk away with zero points on the day but like I say I stayed in one piece and I’m looking forward to another week of testing.

“I’m keeping my head up and ready to continue to do more hard work and I’m sure the results will come back. We will all work together to get success on race weekend in the future.”