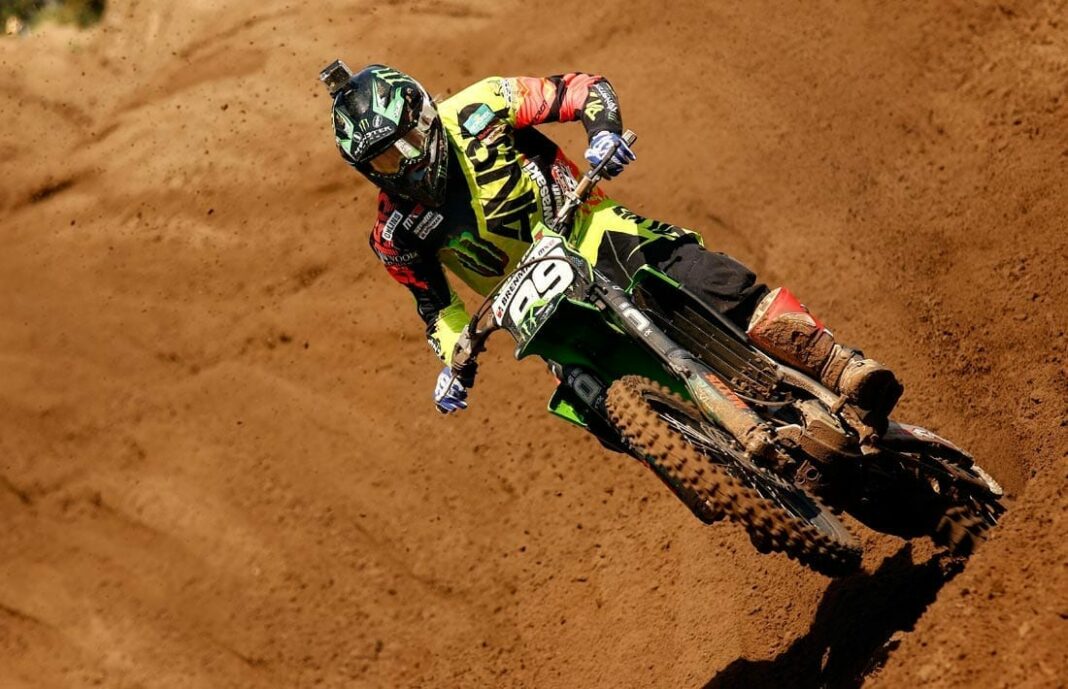 Max Anstie was again in dominant form for Monster Energy DRT Kawasaki in the Belgian round of the FIM World MX2 Motocross Championship to score maximum points at the unrelenting sand track of Lommel.

The English rider, full of confidence after winning five of his last six races, led throughout the Qualifying race and confidently moved to the front of the opening GP moto after two laps to score a clearcut victory by 24 seconds before completing his maximum points score for the weekend by leading race two all the way to win by an even larger margin.

Max remains seventh in the series standings with four rounds remaining but has reduced his deficit on the points leader to 46 and on current form is very much a candidate for the title.

Petar Petrov joined Anstie on the podium as he finished third overall for the Monster Energy Kawasaki MX2 Racing Team. The Bulgarian had chased Anstie home for second place in the Qualifying race and held a strong third place throughout the first GP moto.

After challenging Anstie strongly in the early laps of race two he settled for a fourth place which would secure the first overall GP podium result of his career, showing great confidence as he rebounded from a last lap slip to secure his place in the record books as the first Bulgarian to mount a GP podium for 30 years. He has now advanced to ninth in the series standings.

Team-mate Jordi Tixier had a frustrating weekend to finish ninth overall after finishing the motos seventh and 12th.

The Frenchman held fifth for many laps of the first moto before losing his rhythm to drop back to seventh, while two crashes, one on the opening lap and another on the fifth lap, restricted him to 12th in race two. He now trails the series leader by 40 points to retain his chances of a successful title defence.

Thomas Covington acquitted himself well in the difficult conditions but a crash in the opening moto after he had advanced from 15th to 11th damaged the bike and restricted the young American to two points. A spectacular ride from an initial 15th to finish 10th has lifted him to 14th in the series standings.

The Monster Energy DRT Kawasaki team welcomed Mel Pocock back as a guest – the popular young Englishman suffered a serious hand injury earlier this season at the opening round of the Maxxis British Motocross Championship but has been given the all-clear to resume training and hopes to race again in the UK before the end of the season.

“It’s awesome to win again here in Lommel – it was a great day for British motocross with this win and Shaun’s win in the MXGP,” Max Anstie said. “The fans were great today. The track was demanding physically but I think that the way they prepared the track made it even more difficult.

“Last week I wasn’t very happy with my crash, so I just made sure that it wouldn’t happen again and, even if I never rode here since the GP last year, I showed this weekend what I can do in the sand. We’ll continue to give our best, and we’ll see at the end of the series where we’ll be in the standings!” “It was a great feeling to be on the podium,” said a delighted Petar Petrov. “My first ever and the first one of a Bulgarian rider for almost thirty years! It’s a great feeling and I hope that it’s just the first one of many.

Petar added: “The track was really tough and rough, but that makes the difference between the riders and I really like these conditions even if I’m very tired now. I think that they did a good job on the track, there were many different lines, it was possible to pass and we could make some good races.”

“Not a good weekend for me, and I’m frustrated tonight with my results,” Jordi Tixier said. “In the first race I was fifth but my rhythm wasn’t good enough and I finished seventh; then my start was not so good in the second moto. I was in the pack and crashed at the third corner. I was last and just had to give all I could to come back, but again I lost some time when I had another crash and eventually finished twelfth.”

Thomas Covington commented: “It was a pretty good weekend for me considering the tough track! I was going for a top 10 in the first race when I crashed and packed the radiator full of sand causing it to overheat the next lap. In the second moto I didn’t get the greatest start but came back for a solid 10th place finish.”