Home News Motocross Dylan Walsh gets landed on at MXGP of France – ‘I can’t... 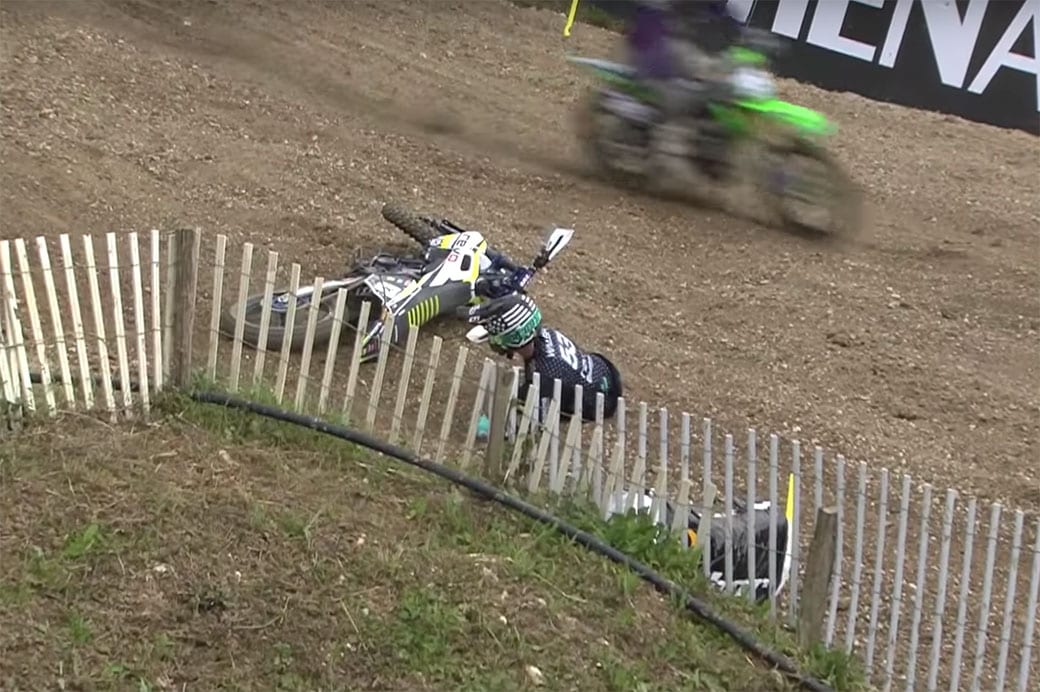 It was another tough weekend for REVO Husqvarna UK with riders Dylan Walsh and Alvin Ostlund both forced to dig deep at the MXGP of France – round seven of the FIM Motocross World Championship – at Saint Jean d’Angely.

Dylan struggled in practice but when the gate dropped on Saturday’s qualification race he started well and was just outside the top 10 when another rider landed on him, causing a DNF. Alvin also had a good start and was a solid 16th at the flag.

Despite being battered and bruised, Dylan lined up for Sunday’s first points-paying moto and was eighth in the early stages before the after-effects of his crash the previous day began to take their toll and he dropped back to 13th.

Alvin was outside the top 20 in the opening laps but got his head down and advanced up to 16th at the flag.

In the second 30-minute plus two lap moto Dylan struggled out of the gate and with the Kiwi clearly in a lot of discomfort the team pulled him out at half-distance.

Alvin completed the opening lap in 16th but slipped back a couple of places to 18th by the end of the race.

After three GPs in a row the team’s busy schedule continues this coming weekend with round four of the Maxxis ACU British Motocross Championship at Blaxhall.

Crew chief Sam Yates: “It’s been another tough weekend for the team but we’ll take it on the chin and move on.

“Free practice wasn’t too good for Dylan and his lap times were off and it was the same again for him in timed practice which wasn’t really where we wanted to be.

“He made a great start around the outside in the qualifying race – I think he gated seventh – and was riding really well but made a bit of a mistake and didn’t jump the step-down and a rider landed on him which caused a DNF.

“He was pretty banged-up and we weren’t sure if he would be able to race on Sunday but he felt all right the next day and in race one he gated well and was on the pace for 13th which was surprisingly good considering how much he was hurting.

“In race two he missed the gate and from there it was very hard for him so we decided to pull him in because he was clearly suffering.

“Alvin had good starts but mistakes in the first two corners cost him. He needs to be more aggressive at the start because once he gets going his lap times are really good and he can run a top-10 pace. He just needs to work on his intensity early on.”

Dylan Walsh: “I’m very sore after qualification. I gave it all I could in the first race and got a great start but got weak towards the end.

“In the second moto I had a bad start and got caught up in a little crash on the first lap but was pushing as hard as I could before the team told me to pull out.

“I’m really happy with my bike but at the moment I can’t seem to catch a break. Still, setbacks like these make me even more determined and will make me a better rider.

“I’m already looking ahead to next weekend and round four of the Maxxis.”

Alvin Ostlund: “My results are a little bit like last weekend so I am disappointed.

“It was tough and I didn’t have the speed to run any higher than I did today. I know what I need to work on and I’ll keep trying to improve.

“I can do much better but I need to be more aggressive in the first laps.”