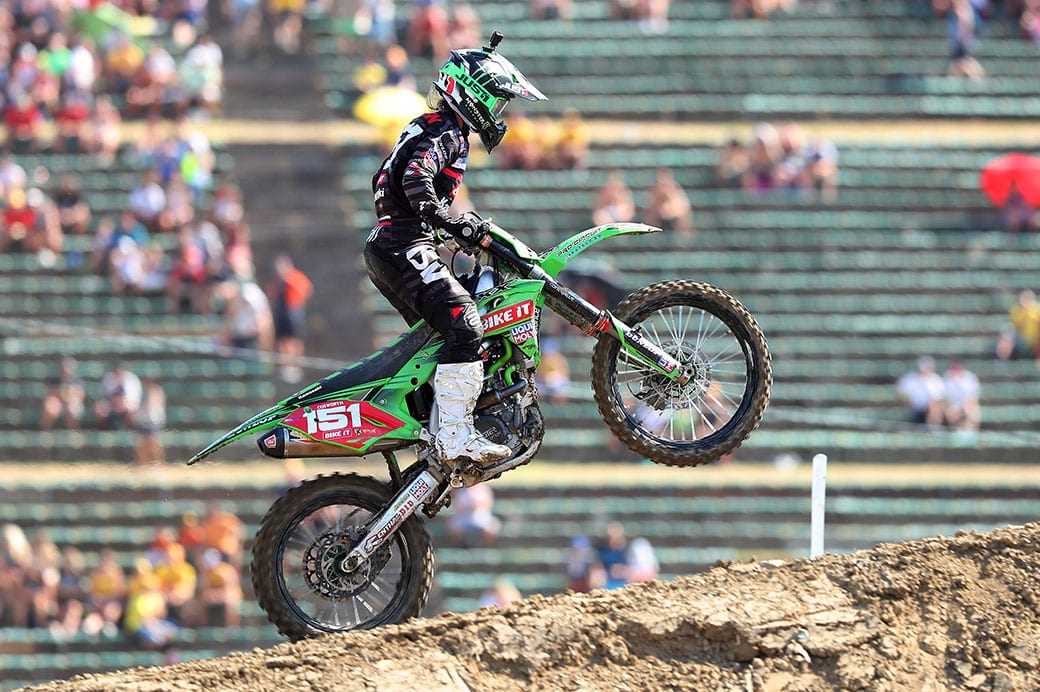 Bike It DRT Kawasaki were eager to get out on the track at the Grand Prix of Italy, run at the historic facility of Imola in Italy, following a positive experience in the bottomless sand of Lommel.

Darian Sanayei seemed to make progress at that event and in the days that followed, so there was a sense that things were trending in the right direction.

The qualifying heat confirmed that as Sanayei grabbed an incredible start and then fought for a position in the top three for the duration. Fourth was the position that he eventually acquired, which was undoubtedly his greatest showing so far this year and really set him up well for the two points-paying races on Sunday.

Sanayei then utilised all of the power within the KX250 to take the early lead in the first moto. Although he occupied the position for two laps, a problem with the rear wheel made things a little tricky from that point on and he lost spots as the remaining laps counted down. He eventually had to retire prematurely with three-quarters of a lap to go while in ninth.

The second race was a consistent outing, Darian got squashed a little on the inside but came out 13th but was able to push hard which enabled him to obtain eighth at the chequered flag.

The 13 points that were acquired at the Grand Prix of Italy do not really reflect just how well he rode but put him in 14th overall on the weekend. The second MX2 rider on Bike It DRT Kawasaki, Gustavo Pessoa, battled on all weekend and was eventually rewarded with two points in the last moto. A 19th in that encounter left him in 23rd overall.

There were no issues for Courtney Duncan, as she continued to edge closer to her first WMX title. Duncan swept both motos yet again and extended her series lead to 23 points, with 50 points up for grabs at the final round in Turkey in just a couple of weeks. There was no stopping her across the weekend, as she posted lap times that were a couple of seconds quicker than the competition at points and proved why she is in such a powerful position.

Before hitting Turkey for the WMX finale, Bike It DRT Kawasaki will travel across to Uddevalla, in Sweden, for the sixteenth round of the 2019 FIM Motocross World Championship this weekend.