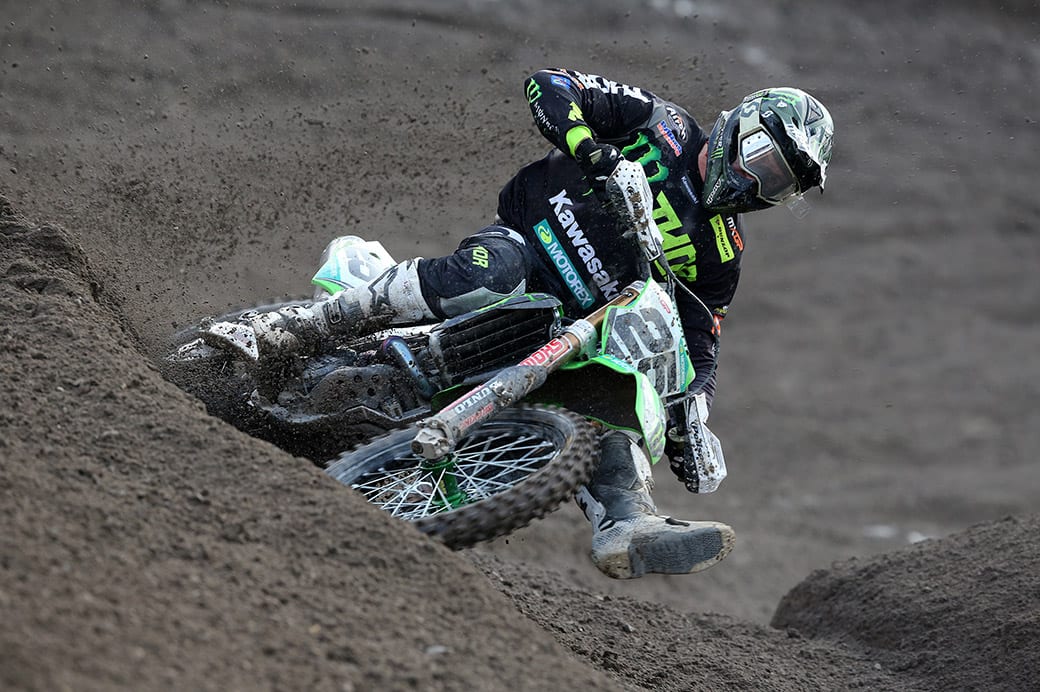 The Monster Energy Kawasaki Racing Team is pleased to confirm that Clement Desalle will enter his fifth consecutive season with the team in the 2020 FIM MXGP Motocross World Championship.

The Belgian GP is one of the ‘home GPs’ for the Monster Energy Kawasaki Racing Team, and last weekend both Clement Desalle and Julien Lieber visited the team in Lommel. Both riders are currently recovering from their injuries, and had the opportunity to meet the team members and guests during two days alongside Tommy Searle; the British rider was forced to withdraw from racing after the first practice session as his right hand, injured one week earlier in the Czech Republic, was too painful.

This weekend was a good opportunity for Clement to meet with KRT team owner Thierry Chizat Suzzoni and Kawasaki Europe race manager Steve Guttridge to sign his contract for next season as all parties want to continue their successful partnership.

“I never had any doubt about my future – I know where I want to go, I know what to expect and for me there was no reason to stop my career after my injury! I have a good feeling when I practice in different sports, and I still have a huge motivation. I know that even if the level of my rivals is very high I can battle for the win, and when I’m at the start gate my goal is always to win. And I have a great feeling with the team; you need a good team and a good bike to win, and I have all of this with KRT where they offer me great working conditions,” explained Clement, who already commenced a new stage in his recovery programme a few weeks ago.

“I got the green light from my doctor to start riding my bicycle on asphalt, and in a few weeks I will be back on my mountain bike, then my enduro bike and finally my motocross bike. It’s great to be able to have some activities, and it’s a good mental stimulation – after my knee injury earlier this season the goal was to be back racing as soon as possible, but after this injury in Russia I knew that it would take a fairly long time as I couldn’t do any activities for several weeks.

“The goal has always been to take the necessary time to be back at 100 per cent, so I have not set a specific date for my comeback,” added Clement, who was watching his first MXGP race for some time.

“Of course it’s difficult to watch the races on television as you would like to be in action on your bike. We’re used to a very intense life; at each race we produce a lot of adrenaline and I’m missing that so much!” he concluded at the end of a weekend in which he was happy to spend time with his second “family” – the Green one!

Thierry Chizat Suzzoni (KRT team owner): “It’s great news for us to sign with Clement for a fifth season in Green and we are really happy to continue working with him. He knows our staff and our bike perfectly and we appreciate both the man and the rider. This season was disrupted with injuries, including the last one in Russia, but his motivation remains the same and we’ll do our best to give him every chance to score many more wins together with KRT.”

Steve Guttridge (KME Race Manager): “Clement fits with the team, their work methods, goals and drive perfectly and so his evaluation and good comments on improving the performance of his race bike at MXGP level has contributed a lot to helping us to produce the excellent new KX450 models that our customers are enjoying so much! His performances this season when fit were world-class again so we are very happy that he remains with Kawasaki continuously next season.”