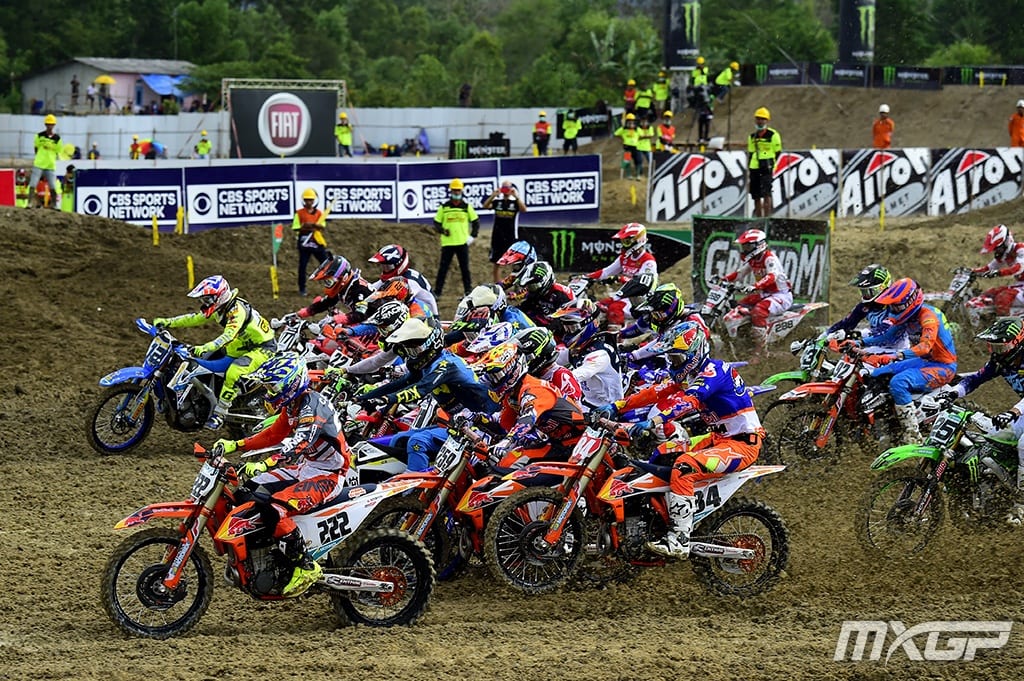 Torrential rain threatened to spoil proceedings once again in Indonesia, but thankfully mother nature backed off, allowing the travelling MXGP tour to take to the track in decent- albeit tricky- conditions on Sunday afternoon.

Evgeny Bobryshev rolled to the line in 14th position after a decent performance in the qualifying race despite a slightly injured left leg.
Once the gates dropped the BOS GP rider found himself in 14th place yet again. The Russian put his head down and looked to fight through the squabbling pack. By the third lap Bobby had moved into 12th position. The tricky conditions featuring long, deep ruts saw lots of riders making mistakes, but Bobryshev kept smooth and consistent to continue working through the field. With 16 minutes left on the clock Bobby moved around Julien Lieber to take over 11th place. With Glen Coldenhoff and Jeremy Seewer just ahead the Russian continued to charge forwards. With 11 minutes to go Bobryshev gained another position as Max Nagl dropped down the field. Never failing to push until the final moments Bobby was able to move past Jeremy Van Horebeek to steal ninth position with only a handful of laps still to go.

A better start in race two saw Bobryshev begin the final moto of the weekend in 11th position. On lap two he was able to get around Max Nagl to move in to the top ten. The technical conditions caught the better of several riders, allowing Bobby to progress into eighth place within the first ten minutes of the moto. A loss of rhythm mid-way through the race saw Bobryshev drop positions to Desalle, Anstie and Seewer. Now in 11th the Russian regrouped and began fighting forwards once again. With just over ten minutes of racing still to go Bobby moved into tenth as Jeremey Van Horebeek dropped backwards. Once again fighting until the very last moments Bobryshev showed his grit and determination as he was able to take advantage of a mistake from Seewer to claim ninth position with two laps to go.
Bobryshev’s 9-9 scorecard gave him ninth overall on the weekend. He remains 11th in the championship standings, closing the gap to 10th.

Evgeny Bobryshev – ‘‘I knew coming in that this weekend wouldn’t be easy. First of all with my knee, which was really painful after my accident at the British championship. It was difficult this weekend as I couldn’t really bend it and the deep conditions with all the ruts made it tough. I managed to finish ninth in both motos and I’m happy to have stayed on two wheels because the track was so tricky. I was happier with the first moto as I didn’t really get tired, I had good lines and a good flow. The second race was a bit more difficult because I pushed hard in the beginning and made a lot of mistakes and that broke my rhythm a bit. But in the end I managed to get into ninth place and get ninth overall. I’m happy with that. I’m glad the bad weather stayed away because on Friday it was raining so heavy but luckily the rain stayed away and we had a good day.’’