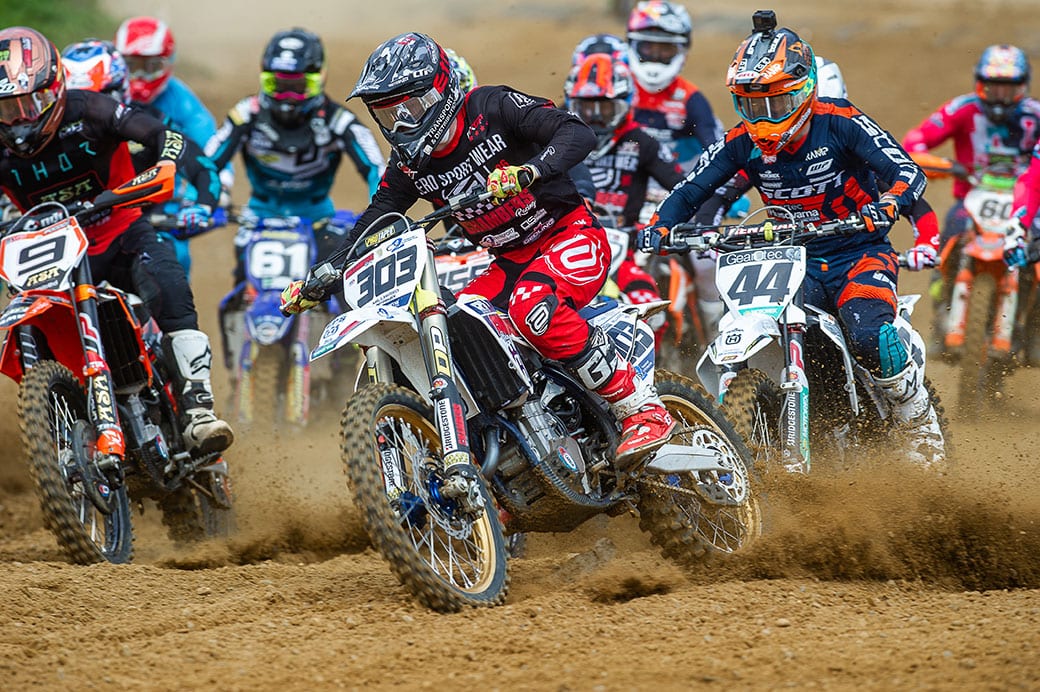 The penultimate round of the Michelin MX Nationals travels to Cusses Gorse this weekend where as well as all the usual exciting motocross action there will be a straight rhythm competition on Saturday evening to decide who is King of the Whoops.

That kicks off at 6pm with eight riders from each Pro class going head-to-head in pairs.

Each rider gets a run at both rhythm lanes with the fastest going through to the semis and then the class finals.

It would be a brave man who bets against Harri Kullas (Cab Screens Deos Group Racing Honda) in the Pro MX1 class as, apart from the last round where he was riding hurt, he has won all the other races. Lewis Tombs (Buildbase Honda) is 42 points behind Kullas but there’s 100 points up for grabs so he’s still in the hunt.

It’s not known if Gert Krestinov (Phoenix Tools Apico Kawasaki) will be back from a broken arm to build on his third place in the championship.

If he’s not that will give Jake Millward (Chambers Husqvarna), Mel Pocock (ASA United KTM) and Jake Shipton (Crescent Yamaha) a chance to move up to an end-of-season podium position.

Only three points separate Josh Gilbert (Buildbase Honda) and Martin Barr (Crescent Yamaha) at the top of the Pro MX2 class and it looks like the championship, even with two rounds to go, will be between these two.
Gavin Stevenson and Richard Bird are still battling it out at the top of the Expert MX1 class and with third-placed Meara now in the Pro MX1 class the pressure has eased for the leading pair.

It’s even tighter at the top of Expert MX2 with Aaron-Lee Hanson having a slim lead over Ben Clark, Jordan Keogh and Jansen Day but with eight races left to run this year and 200 points up for grabs you can’t count any of the top 10 riders out just yet.

Stephen Kelly has a two-race advantage over Luke Oldfield in Clubman MX1 while Brad Thornhill has a six-point lead over Harry Fletcher in the Clubman MX2 championship.

Despite winning 12 out of a possible 16 races, Ike Carter only has a 31-point lead over Kyle McNicol in Youth MXY2 while Ryan Mawhinney has a slightly bigger advantage over James Smith in Youth MXY1.

Sam Atkinson will take some stopping in the Big Wheel 85s as he has a 112-point lead over Thomas Harris who has Charlie Palmer snapping at his heels for second. Tyla Hooley has a similar advantage over McKenzie Marshall in the Small Wheel 85s – and that’s with Marshall missing the first round – but both will have to watch Warren Clarke, Billy Askew, Beau Brown and Finley Boxall as just 11 points separate them all from second place.

MX Nationals Straight Rhythm kicks off on Saturday at 5pm and if you want to just rock up for that it’ll cost just £5. There are some cool head-to-head match-ups and with some Arenacross regulars putting their hats in, it’ll be fun to see who comes out on top.

An adult pass for the weekend is only £12 online and £15 on the gate with children under 12 getting in free. Camping is £10 for the weekend. Tickets and VIP information is on the MX Nationals website.