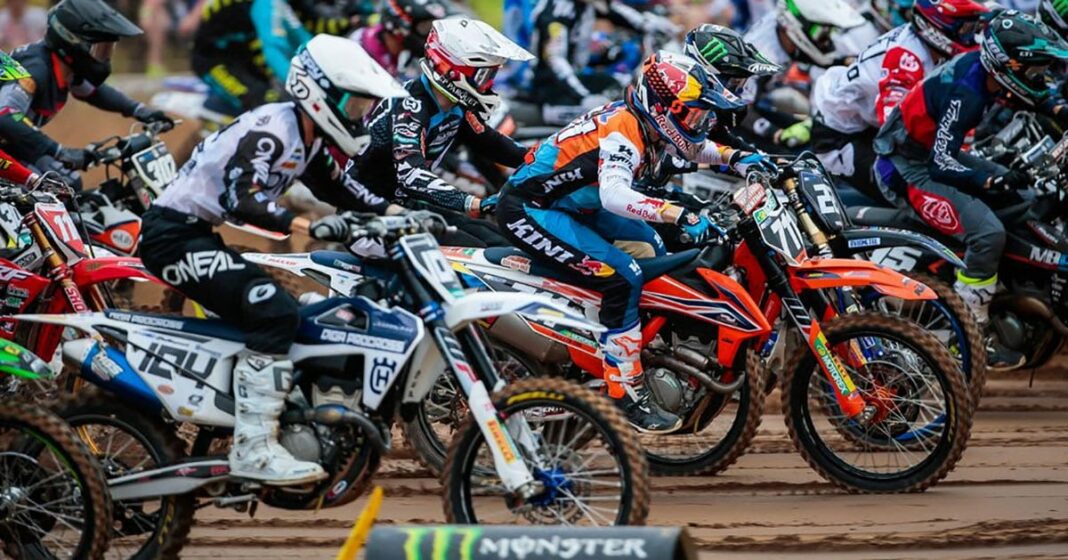 The Latvian round for European Championship classes of EMX250 and EMX2T presented by FMF Racing proved an exciting atmosphere with two dominant winners.

In the EMX250 class it was Roan van de Moosdijk from F&H Kawasaki team who scored the win with 1-1 results, and in the EMX2T Presented by FMF Racing Swedish rider Ken Bengtson also went 1-1 for his first ever win in the class.

F&H Kawasaki team’s Roan van de Moosdijk proved to be very strong in the sand of Kegums and also closed up on new series leader Team Maddii Racing Husqvarna’s Alberto Forato, who finished second overall with 3-4 results. Third overall in the EMX250 class was Jeremy Sydow with 2-5 results obtaining his first podium of his career.

After nine laps Van de Moosdijk extended his lead to 10 seconds, Rubini moved into sixth position and Gilbert dropped to eighth. On lap 11 Rubini moved into fifth place but was quickly back in sixth. A brilliant battle for fourth place featured Yamaha Europe EMX125 MJC’sThibault Benistant and Forato, whotried to get the upper hand. Eventually it was Forato who finished ahead of the Frenchman. Van de Moosdijk ended ahead of Sydow and Forato.

Rene Hofer led the second EMX250 race ahead of Sydow, Van de Moosdijk, Talviku, and Team Maddii Racing Husqvarna’s Mattia Guadagnini,while Rubini was down in 16th place. Van de Moosdijk was quickly in second and then moved into the lead by the end of lap 1.

After two laps Van de Moosdijk held a three second lead over Sydow, who had also passed Hofer, with Rubini up to 11th place. Van de Moosdijk looked brilliant up front, floating his way around the technical sand circuit in Latvia and managing to lead the whole race.

Rubini kept climbing through the field moving into seventh place on lap four, while race leader Van de Moosdijk was six seconds ahead of Sydow, and Hofer was a further four seconds behind Sydow.

Rubini made a small error and fell, then dropped back to a spot after moving into sixth position, but more importantly lost a lot of time on the guys in front.

Van de Moosdijk had built up a lead of around nine seconds and once again was controlling the race up front. Guadagnini moved past Hofer for third place. While the Dutchman led up front, Rubini was trying to keep his red plate and moved into fifth place to secure it for now.

With an 18 second lead, it was an easy sailing for Van de Moosdijk, and Rubini moved into third place with the ride of the race. Guadagnini moved into second as Sydow dropped to fourth. Also an epic race from Alberto Forato, who finished fourth after a poor start in 24thand managed to take back the red plate leading into Germany next week. Van de Moosdijk won race 2 from Guadagnini and Rubini.

Sweden’s Ken Bengtson might have made his debut in the EMX2T presented by FMF Racing but he looked solid in the sand of Kegums. With second place overall, Team Ecomaxx Fuels team’s Mike Kras scored 2-2 results leading the series points with a two point over Verde Substance KTM team’s Brad Anderson. Third overall was Andero Lusbo with 4-3 scores.

The first EMX2T presented by FMF Racing race started with Brad Anderson leading from Mike Kras and Nick Leerkes. Anderson rode safe early getting a one second lead over Kras after a lap, and Ken Bengtson and Todd Kellett moved into third and fourth positions. Bengtson was on fire as he caught and passed Kras for second place on lap three, and after four laps the lead by Anderson was still around one second.

Showing great sand skills Bengtson moved past Anderson on lap six, but the British rider fought back to take the lead again. The two then battled backwards and forward. Behind them Kras was nearly five seconds off the pace, with Kellett and Andero Lusbo in fourth and fifth.

On lap seven Bengtson again led and quickly got away from Anderson and Kras was suddenly just a second behind Anderson. On lap nine Kras flew past Anderson as the Dutchman showed why the riders from Holland are considered the best sand riders in the World. The lead by Bengtson was nearly four seconds.

As the race closed down Bengtson continued to control the front pace, and despite Kras did his best the Swedish rider won from Kras and Kellett.

After two laps the lead by Anderson was four seconds, and Bengtson had moved into second place, with Kras third. Just as he had done in the opening race, Bengtson started putting pressure on Anderson and on lap four the two were locked together in a battle.

To make things more interesting, Kras joined the two leaders and the beautiful sand of Kegums was making for brilliant racing once again. After huge pressure, Bengtson moved into the lead in the air, over a jump. Kras was quick to follow and also moved past Anderson.

Lusbo closed up on Anderson and on lap nine Lusbo moved into third place, knocking Anderson off the podium. Todd Kellett made nice ground as he moved into fifth place on lap eight.

Bengtson and Kras had pulled well away from the others, with Lusbo and Anderson around 10 seconds behind as they continued to battle for third and fourth places. A small mistake by Bengtson and Kras was all over him for the lead.