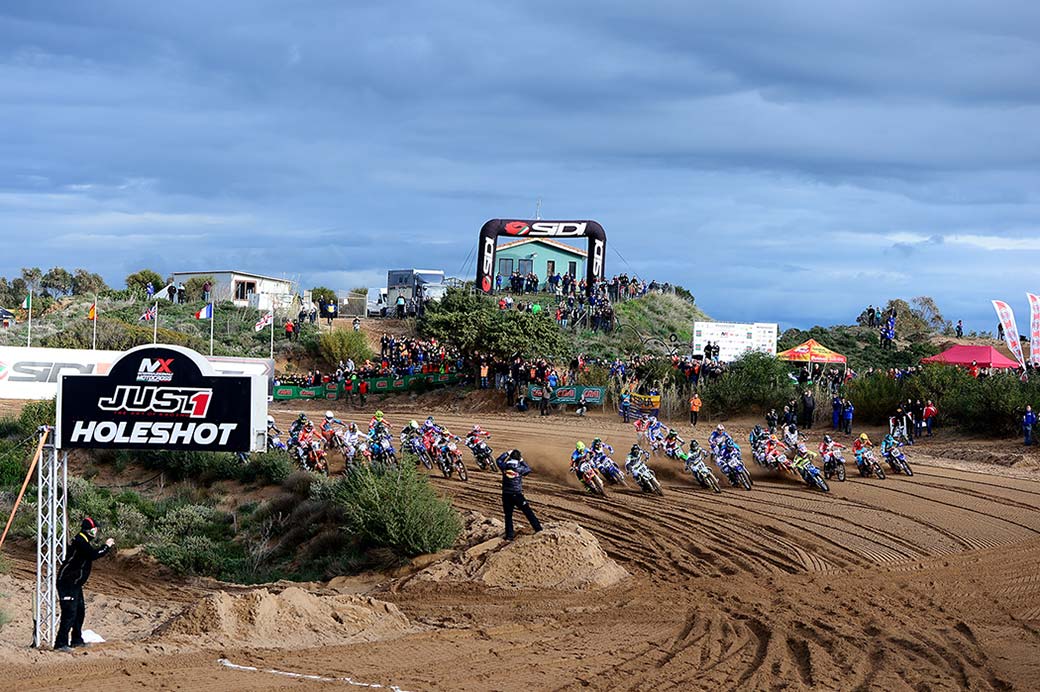 The 2018 racing season was officially opened yesterday in Riola Sardo – the opening round of the 2018 Internazionali d’Italia Motocross. After two windy and rainy days, finally the nice weather arrived and the 105 riders, divided into three categories, could race in front of about 5,000 fans.

The organisers also reported great success for their live streaming service that scored more than 200,000 views during the day, they said. I can say that the streaming worked well for us and was certainly appreciated.

After having realised the 24MX fast lap in timed practice, Tony Cairoli also took the Just1 Holeshot in the MX1 race.

From that moment the world champion had a lonely and largely uneventful ride until the chequered flag.

Behind him, a consistent Max Anstie did the Brits proud, while Jeremy Van Horebeek took the lowest step of the podium at the last lap, passing Paulin Gautier.

A great debut in MX1 for Jeremy Seewer, who claimed eighth position during the last laps against Alessandro Lupino. The top 10 was completed by Arminas Jasikonis, at his debut on Honda.

But it was the opening metres of the race that got the most attention from the watching crowd and the viewers in front of their devices at home. Jeffrey Herlings, built up by some as TC222’s only threat crashed out of the race at the first corner. A contusion on his shoulder and bike damage left the Dutchman lamenting what might have been.

But considering what happened to him last year at this stage of the season he was happy to leave relatively unscathed.

In MX2, the Australian rider of Hunter Lawrence on his new Honda ride raced aggressively, paying attention to the difficult and deep sand of Riola. In second place, MX2 world champion Pauls Jonass had to recover about nine positions after a mistake in the early part of the race. It’s not easy to pass on this circuit – mainly used for training – but he did not give up on his KTM Factory 250 SX-F and gained a very important result which will keep him among the top riders for the Internazionali d’Italia MX title.

The podium was completed with the Honda HRC rider Calvin Vlandereen, while the Just1 Holeshot was won by the young Danish Mikkel Haarup, on his 250 debut.

Cairoli dominated the Super-final moto. If it wasn’t for two laps, at the halfway mark, when Cairoli reduced his pace, allowing Anstie and then Febvre to pass him, the story of the Supercampione Final would have been the same as the MX1 race.

The nine-time world champion from the start, winning the Just1 Holeshot and racing on a pace, impossible to keep for everyone else. After the first two corners, Cairoli had already created the gap from the following pack, which included Anstie, Van Horebeek and Febvre at the head of it.

At halfway his advantage was reduced when Cairoli slowed his pace and Max Anstie and Romain Febvre pasted the champ. Cairoli regrouped and a few laps later retook the lead.

Max Anstie, thanks to his speed and great feeling with the bike, confirmed the overall second place. Behind him the two Yamaha Rinaldi team-mates – a determined Febvre, followed by Van Horebeek in fourth position. Fifth place was taken by Paulin Gautier, after a difficult start, while the first MX2 rider was Pauls Jonass, who finished in sixth position.