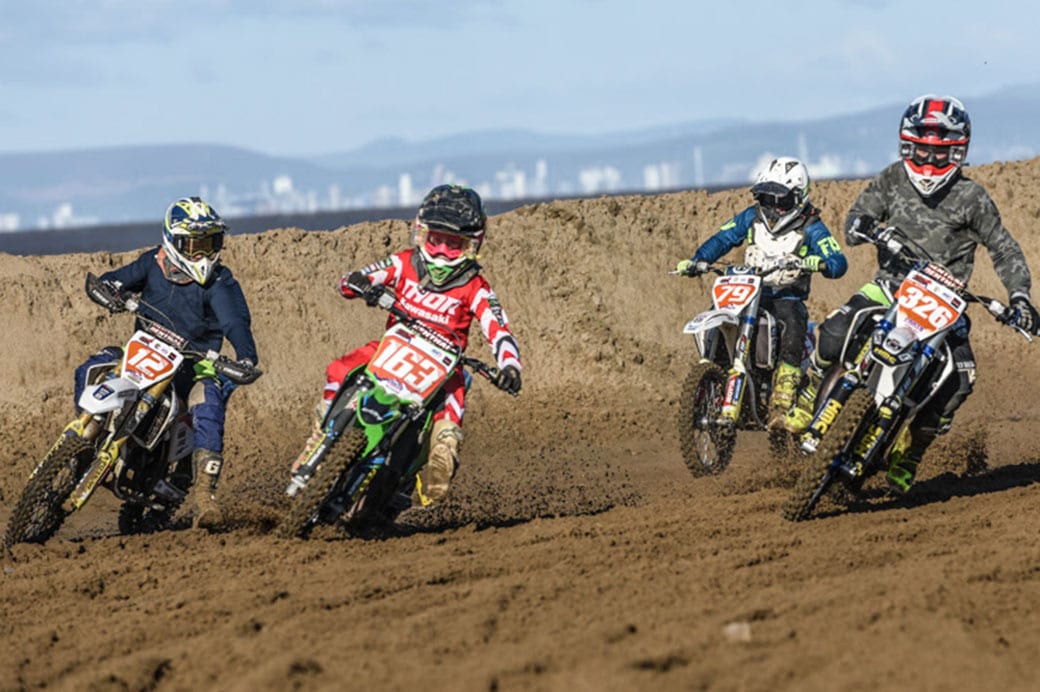 The 2018 Judd KTM British Youth National Championship Powered by Parts Europe and the Steve Benton Transport British Under-21 Championship both came to a close last weekend (October 27-28) on Weston-super-Mare beach where the series’ winners were crowned champions.

The Junior 65cc class racing was action-packed, especially for the front-runners, as Shaun Mahoney, Billy Askew and Ashton Boughen all took moto wins. Mahoney had the speed and managed to take both race wins on Sunday, putting him on the top step of the podium for the final round for third place in the championship.

Rounding out the top six was Billy Askew, runner-up in the series Kalvin Kelly, Ashton Boughen – who is this year’s champion after a strong and consistent season, Zane Stephens and Max Harris.

In the Small Wheel 85cc class Bailey Johnston and Wal Beaney were on the gas both taking two moto wins each over the weekend, as the overall went down to the final race.

Johnston clinched the win and the overall, while celebrating the championship honours fresh off the back of his HydroGarden Weston Beach Race Powered by KTM victory last weekend. Beaney was second on the weekend and concluded his season runner-up in the championship, whilst Reece Ross took third position. Ben Mustoe was fourth overall at Weston, and third in the championship standings.

The Big Wheel 85cc class had some spectacular racing to watch between all riders and top runners – Jack Grayshon, Ethan Lane, Sam Atkinson, Alfie Jones and Mani Freyr Peturrson. Grayshon took his KTM machine to the sand with real determination to clinch three out of the four moto wins on the beach, and the youngster was crowned the class champion for 2018.

Ethan Lane walked away with second spot on the podium and Sam Atkinson was third, finishing the championship as the runner-up in the series. Rounding out the top six was Alfie Jones, who was third in the championship, Mani Freyr Peturrson and Charlie Palmer.

Once again, the 125cc category provided some spectacular bar banging action throughout the weekend. Drew Anderson steered his KTM machine to victory and the overall championship honours after some close battles with Sam Nunn, Kyle McNicol and Preston Williams. With just two points difference Sam Nunn ended the weekend with second and Preston Williams was third. Williams was second in the championship, while Kyle McNicol, who had some unfortunate incidents over the weekend, was third in the series with his fourth overall.

In the Open Class we were again provided with some very close battles between the riders to take the podium spots and going into the final race of the weekend there was no clear winner for round six.

Aaron-Lee Hanson was first and took with it the 2018 championship after an incredibly strong season, Josh Greedy was second for the runner-up position and wildcard rider Christopher Moore took a podium third. Alex Hudziak was third in the championship overall.

Finally, in the Steve Benton Transport British Under-21 Championship Rossi Beard, who won at the Weston Beach Race last weekend, and James Mackrel gave some spectacular racing for the crowd to watch in Weston-super-Mare. With no clear winner for the final round and the 2018 Championship going into the final moto, both Beard and Mackrel knew they had to give it their all to the chequered flag. Beard emerged as the winner, taking the championship by just two points, as Mackrel took second and second in the series, with Oliver Benton third on the podium for third in the standings.

As the season has come to a close, RHL Activities would like to thank all of its riders, families, sponsors, staff and partners for a spectacular year of racing, while congratulating all of the 2018 champions.