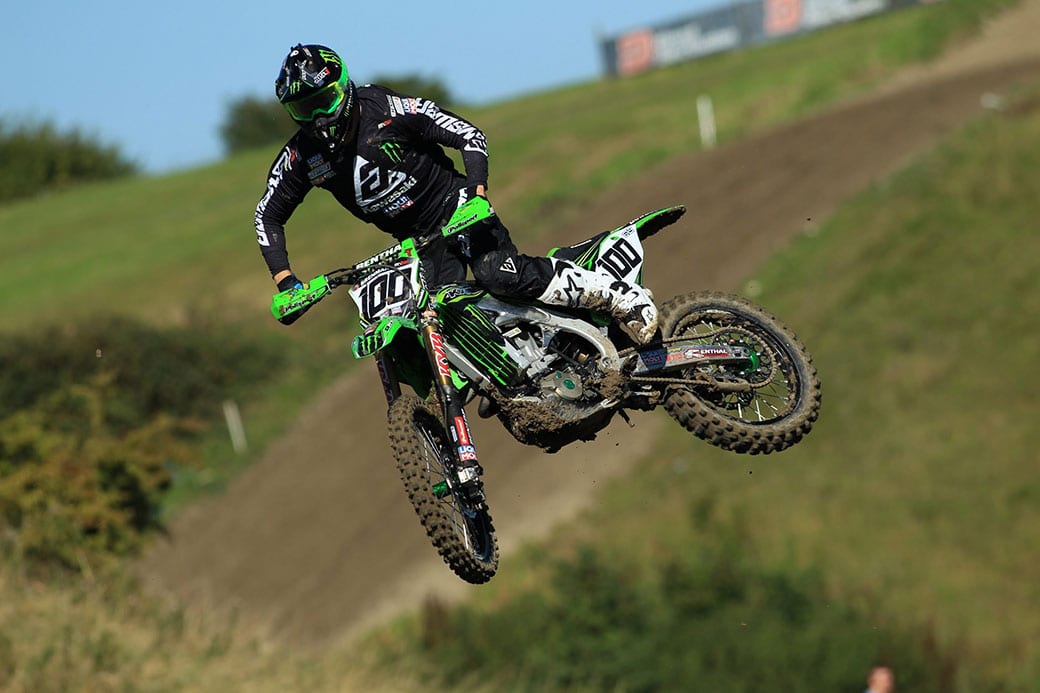 RHL Activities has announced that Bike It DRT Kawasaki Team’s Tommy Searle and Darian Sanayei will contest the Culham round of the Maxxis ACU British Motocross Championship, which forms part of the British Motocross Festival weekend of March 30 to April 1.

Tommy Searle, who won the British MX1 championship in 2016 and was also part of Team Great Britain – who last year took an emotional first podium finish in 20 years at the Motocross of Nations – is looking forward to competing at his team’s local event with a wildcard entry and will be hoping to put on a show for the fans.

Searle’s season was plagued with difficulty in 2017 due to an injury sustained during training before the racing year kicked off, but the 27-year-old British-ace will be back in action in MXGP this season with the goal of battling hard with the likes of Jeffrey Herlings, with whom he memorably challenged for the MX2 title in 2012.

Joining him for the British Motocross Festival is MX2 team-mate Darian Sanayei. The American-ace ventured over to Europe in 2016 following success in the US junior ranks and the youngster blossomed, having won six motos in the ultra-challenging EMX250 class, while also finishing with a podium result in six others during the 10-round series – taking a fighting second position overall at the season end.

Sanayei went on to race MX2 Grands Prix in 2017 and finished in a very credible 11th position overall in the championship, while also earning some top-five moto results. The 21-year-old is excited for his prospects in 2018 now armed with a Grand Prix season under his belt and is particularly looking forward to the Culham British championship event, where he will compete on the same soil that many motocross legends have previously raced.

The British Motocross Festival weekend is a family event from Friday to Sunday that showcases the talent of the best juniors in the UK with the Judd KTM British Youth Nationals on Friday and Saturday, while the Maxxis British Motocross Championship pros will compete on Sunday. Aside from the racing, RHL Activities and the ACU have planned some fantastic off-track entertainment with further details to be announced soon.

“As a first festival for the Maxxis British Motocross Championship it’s great for us to be competing with Tommy and Darian at the event promoted by RHL,” said Team Owner and Manager of Dixon Racing Team. “Culham is the closest event to the Bike It DRT Kawasaki workshops, and whilst the GP schedule is tight, we still like to race in the UK, especially for the new British Motocross Festival, as it’s good to show the junior riders something to aspire to. We believe it’s important to support the youth riders coming through, so we are looking forward to rubbing shoulders with the up and coming stars of the future whilst being part of an important weekend.”

Director of RHL Activities, Gareth Hockey commented: “It’s great that Tommy and Darian will make a wildcard appearance at the British Motocross Festival, as we know the fans will really appreciate it.

“I’d like to thank Steve Dixon for his support, and it will be fantastic to see these two Grand Prix regulars battling it out at Culham. Preparations for the event are going well, and this announcement certainly just adds to the spectacular where the best juniors and pros in the country will race on the same track in one weekend.”