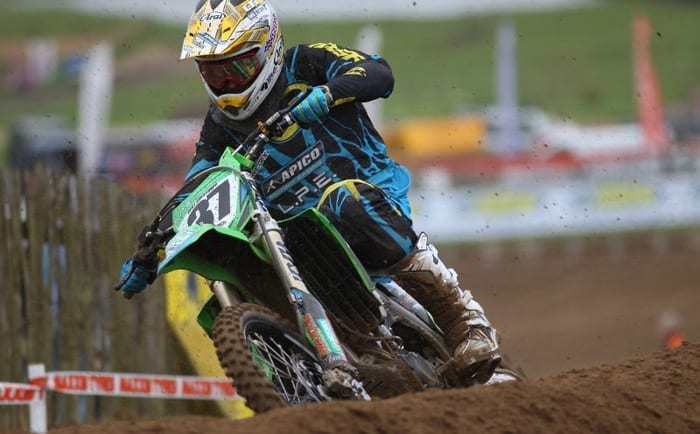 The second round of the Maxxis ACU British Motocross Championship saw the Apico LPE Kawasaki Racing team head to Lyng in Norfolk. Following on from the recent podium at the MX Nationals the team were looking forward to a great day ahead.

In the qualifying session Gert Krestinov was the star after going third fastest in the first session before improving his time in Superpole and moved up to second. In the MX2 class Erki Kahro finished 19th fastest, while youth rider Ben James finished 26th in the MXY2 class.

In the opening MX1 class race of the day Krestinov made a strong top ten start but a mistake on the opening lap lost him a few places. As the race progressed Krestinov worked his way up into fifth place and finished just a second behind Banks-Browne in fourth.

The second race saw Gert start inside the top 15 and quickly move into the top 10. Once there Gert tried to push forward, but a problem with his goggles caused vision issues, limiting his push to eighth place.

The final race of the day saw another strong start which put Gert into the top five – battling hard with Whatley and Nicholls. Unfortunately Gert lost a place when Nicholls pushed Krestinov over a berm and down into sixth place, where he would remain for the rest of the race.

Krestinov’s three results gave him seventh overall on the day and just four points off the podium – moving up to seventh in the championship.

“For the first time in a long while I got a really good qualifying time and finished second,” said Gert Krestinov. “Then in the first race I got an okay start but made a mistake and slipped to 14th and charged back to fifth so that was a good ride.

“The second race was a very average ride and I only finished in eighth place. The last race I got the best start and was in fifth place and battling with Whatley, but I was feeling tired and was unable to progress and finished in sixth for seventh overall. Ideally I had hoped to finish higher but the points were really close.”

In the MX2 class Erki suffered a poor start and was stuck in 29th for the opening laps and struggling to make any progress forward. As the race went on Erki suffered a small mechanical problem and decide not to continue with the meeting.

In the MXY2 class Ben James suffered a bad start, but moved towards the points when a bike problem unfortunately removed him from the race. The second race would once again see Ben suffer another bad start and have to work hard to progress forward and finish just outside the points in 27th place.

A disappointed Ben James said: “It’s not such a good start to the season as I struggled with arm pump in qualifying and rode tight and finished 26th. Then in the first race I suffered a bike problem and DNF’d. For the second race I had to use my spare bike and got a bad start and finished down in 27th place.”

Team Manager, Steve James commented: “Today has been really good in the MX1 class, unfortunately in MX2 Erki had a problem in the first race and didn’t take any more part in the meeting.

“Then in MXY2 Ben suffered a bike problem in race one and a bad start in race two limited him to 27th.

“So overall it wasn’t a great day for the smaller bikes but in MX1 it was a mega day. Gert was third in Q1 and then went up to second in Superpole. In the first race Gert got a good start and was seventh early on but slipped to 14th before recovering to fifth at the finish.

“[In] the second race Gert had a poor start and finished eighth which damaged his overall result today. The last race he started in fifth and when passed by Nicholls was pushed over the berm and slipped to sixth.

“It wasn’t a bad move, just a racing move but it cost Gert time on the leading group and by the time he caught Irwin and Whatley again it was near the end of the race. But seventh overall was still good and the points were so close only four points between third and seventh so I am still very happy as Gert rode very well and we are now seventh in the championship and will continue to push forward.