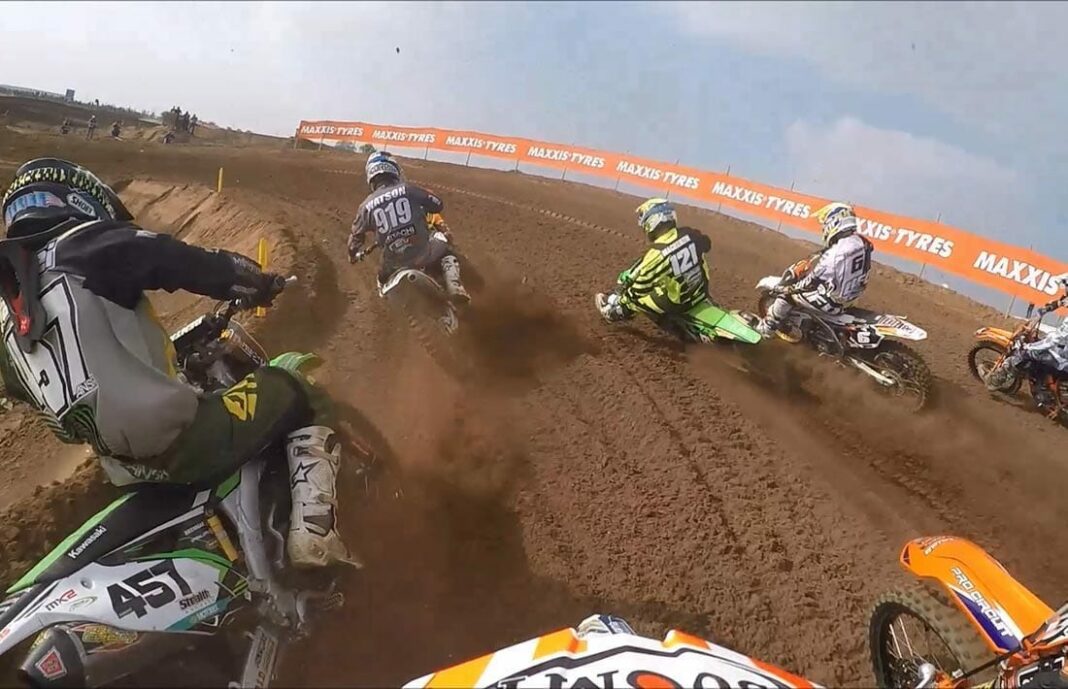 The final round of the Maxxis ACU British Motocross Championship, powered by Skye Energy was held at FatCat Motoparc – the rough and rugged Doncaster circuit inspired some great racing in the MX2 class, with the championship yet to be decided.

Despite top wildcard entries, including GP pilot Petar Petrov and the fast paced US import Darian Sanayei, Steven Clarke qualified in seventh and clinched second overall with a seventh and two-second place results.

DBR: Have you made any changes to the bike since the last round of the Maxxis at Preston Docks?

Steven: “We’ve actually made a few changes to the suspension. We ended up going stiffer on the forks. Apart from that, everything internally is exactly the same.”

DBR: What were your expectations going into the final round?

Steven: “To be honest, I didn’t really have any expectations. As it’s the last round of the championship, I was just wanting to have three safe but solid results. As it turned out I ended up riding really well and mixing it with the wildcard entries, so I’m really pleased with how today has panned out.”

DBR: What did you reckon to the track?

Steven: “I think it was awesome. I like the few changes they’ve made and it was prepped really well. Obviously it soon got rough, but that made for some good racing and it made line choice all the more important.”

DBR: You qualified in seventh. Qualifying looked incredibly tight, especially considering everyone between you and third position were in the same second! How did you find qualifying?

Steven: “You’re right, it was seriously tight! It was flat out as it hadn’t roughed up by that point. I was happy with seventh; especially considering I always know that qualifying isn’t my strong point. I try to make it my goal to come out in the top 10, so I can capitalise on the strong gate position during the race.”

DBR: Can you briefly talk us through each race?

Steven: “I had a great start in race one and rounded the first corner in third, side by side with Ben [Watson]. Although after only a couple of laps I made a mistake when I was chasing Jordan [Booker] and rode off the side of the track (4.10 in the footage). I actually ended up crashing which cost me a heap of positions. After that, I struggled to find a rhythm for a while before following Adam [Sterry] through the pack. At that point my lap times were good and I felt really comfortable on the bike.”

Steven: “I didn’t have such a good start in race two. I rounded the first corner in seventh but soon made some good passes. Lenoir ended up going down on the beginning of the third lap (8.46 in the footage). Once I had made passes into second I was around 10 seconds behind Ben [Watson]. I kept my lap times low and pulled him in through the race. In fact it was only me and Ben to get our lap times down into the 1.51’s.”

Steven: “I had another solid start in race three and rounded the corner in around fifth. I soon found myself behind Watson and Sterry. I had a great battle with Sterry (9.25 onwards in the footage) until I eventually managed to get the better of him. By this point, the sun was making it really hard to see some of the ruts, especially down the back straight. I didn’t want to make any mistakes, so I backed it off a little and settled for second.”

DBR: Can you sum up your season in three words?

DBR: You secured sixth in the championship for 2015. Are you happy with that?

Steven: “I knew it would be hard to move higher as there was quite a big points difference between me and fifth. I ended up finishing only 10 points off Bryan [MacKenzie]. I’m happy with that considering I completely missed a round after my bikes were stolen.”

DBR: What are your plans for the remainder of the season and through the winter?

Steven: “I’ll be racing the German Supercross series this winter. There are three in November and one in January. I also plan to go back over to America and spend some time training at the Millsaps facility. The weather’s always guaranteed so it will be perfect winter training in preparation for next year. I’m also excited to start my fitness training with Scott Probert at Innovation Fitness UK.

DBR: That brings an end to the Maxxis British Championship for another year. Who would you like to thank?

Steven: “I would just like to say how privileged I am to be working with some incredible sponsors. They include Husqvarna Motorcycles, Apico Factory Racing, Putoline Oils, CnC doors, Talon engineering, HGS exhaust systems, Renthal, Boysen, Ansr, 100%, Forma boots, Suomy helmets, Jim at motoshack, Excel 2000, AMG, Acerbis, Derek at DJ Motorsport, all the boys at PJ Engineering, B&G Grinding and also Surf and Turf instant shelters. I can’t forget a huge thanks to my mechanic Stu Summers and my parents for all of their support throughout my career.”

DBR: Many thanks for that Steven. We wish you all the best for the winter and look forward to seeing you back racing in 2016.

MXGB Lyng: ‘It’s great to have both riders on the podium’ – Searle