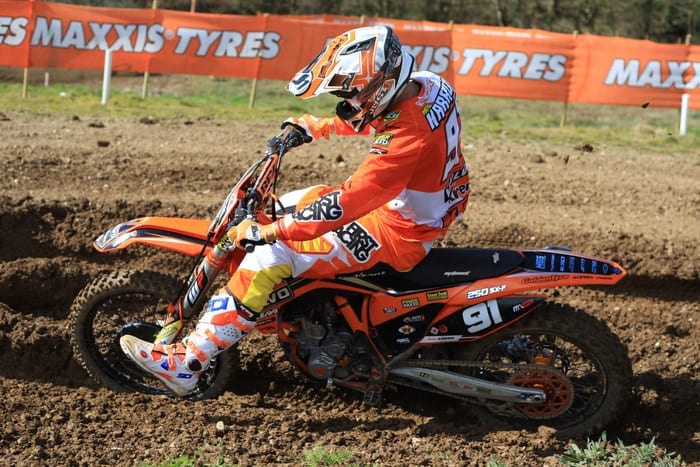 The opening round of the Maxxis ACU British Motocross Championship took place on Sunday at Landrake near Plymouth. After the dreadful weather that has been suffered in the UK, Sunday’s sunshine and clear skies was a welcome addition for all who attended.

The morning qualifying sessions saw Matiss Karro take pole position in the MX2 class, while Greame Irwin set the fastest time ahead of Shaun Simpson in MX1 and Brian Wheeler took pole in the Veterans class.

The MX1 class on the day was all about three riders, HM Plant KTM UK’s Shaun Simpson, Wilvo Forkrent KTM’s Jake Nicholls and reigning Champion Kristian Whatley on the MBO Sports Yamaha. The three battled it out for race wins in all three motos. In the first moto Simpson had to settle for a distant third place as Nicholls took the first victory of the season ahead of Whatley.

After making a few changes following the first race Simpson looked much more settled and took the win in race two ahead of Nicholls and Brad Anderson in third. The final MX1 race of the day again saw Simpson take another start-to-finish race win ahead of Whatley and Nicholls to take the red plate as series leader.

In the MX2 class it looked like Matiss Karro on the Wilvo Forkrent KTM was going to leave Cornwall with a comfortable overall victory with three outright moto wins. In the first race of the day Karro quickly stormed to the front and took a comfortable race win over Mel Pocock and Steven Lenoir.

The second race once again saw Karro take a comfortable 20 plus second victory over fellow KTM riders Pocock and young Ben Watson in third. It was the last MX2 race of the day that was to produce the most action as Karro crashed three times in total, which saw Pocock take the victory and the top step of the podium by virtue of his better last race after scoring strong 2-2-1 scores.

Karro picked himself up to finish seventh in the final race which secured him second place overall whilst Steven Lenoir took the lower step of the podium in third.

The event also incorporated the first round of the Veterans Championship where reigning Champion, Phil Mercer on the IDS – Chambers KTM took victory in the first race before recording a third place finish in the second race to secure victory by the narrowest of margins over Brian Wheeler on the GL12 Racing Kawasaki and Ready Power KTM’s Greg Hanson.

The action for the MX1 and MX2 class now head to Lyng in Norfolk for the second round on April 6 where they will be joined by the MXY2 class.