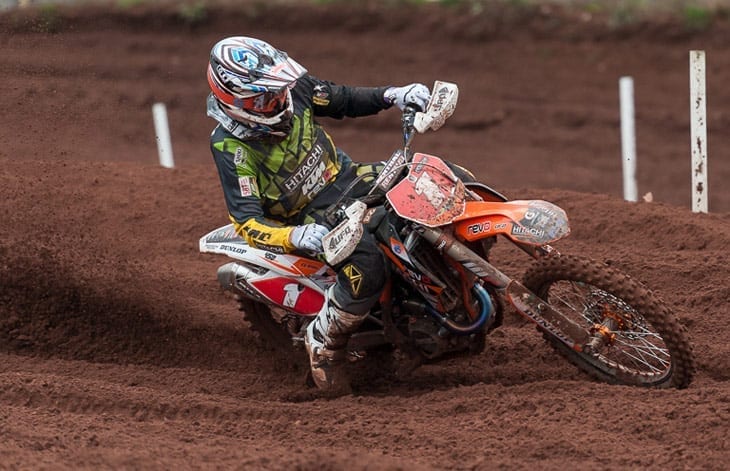 With another flawless performance Hitachi Construction Machinery KTM UK’s Shaun Simpson dominated proceedings at the penultimate round of the Maxxis British Motocross Championship, powered by Skye Energy Drink at the superb Preston Docks (Lancashire, UK) facility to claim the MX1 title for the third time.

The world number four GP pilot was only headed for half a lap all day and once again stood on the top step of the podium with Buildbase Honda Racing’s Kristian Whatley just edging out Heads and ALL Threads Suzuki’s Graeme Irwin by a single point.

MBO Power ASA Scaffolding Yamaha’s Brad Anderson looked set to record his best result of the season, but a DNF with just three laps to go in the final moto scuppered his chances of a certain podium position.

Billy MacKenzie on the 450 version of the Monster Energy DRT Kawasaki – perhaps getting in some base settings for the rumoured Tommy Searle ride, while getting his name out there to other teams – made a return to British racing but struggled to find his rhythm on the rough sandy circuit. But MacKenzie still finished 11th overall, which included a charge from last on the first lap in the opening 20 minute sprint.

Monster Energy DRT Kawasaki’s Max Anstie was equally dominate in the MX2 class and heads to the final round in three weeks time 44 points ahead of his closest challenger, Dyer and Butler KTM’s Steven Lenoir who recorded 5-4-3 results to keep his slim championship hopes alive. While Wilvo Forkrent KTM’s Adam Sterry backed up his two second-place finishes with a sixth to take second overall on the day.

MXW Racing Chichester Honda’s Oliver Osmaston extended his lead in the MXY2 Youth category despite having to pick himself up from the floor in the opening moto and climbing back up to eighth with two moto wins to round off the day.

The final round of the championship takes place in four weeks time at another deep sand circuit, FatCat Moto Park near Doncaster. See you there.