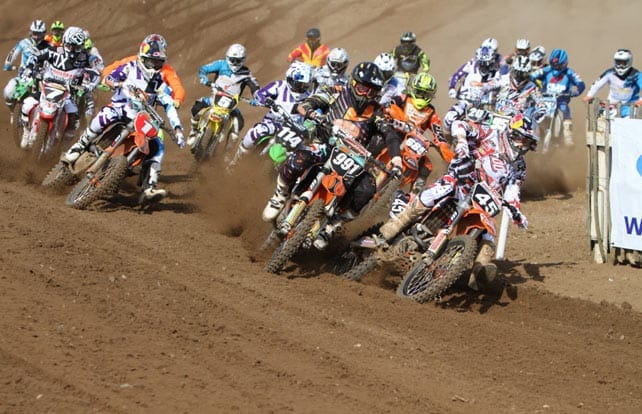 The fourth round of the Maxxis ACU British Motocross Championships, hosted by ACU Events Ltd heads to Milton MX Park near Northampton this weekend.

With three classes of action on display at Milton Park there is sure to be plenty to keep you entertained. ACU Events have been busy working on continually improving the circuit and the racing surface.

Reigning British Champion Elliott Banks Browne currently leads the MX2 class and will be hoping to repeat his results from last year at Milton. HM Plant KTM UK team mate Nathan Watson currently sits second in the standings after an outstanding performance at Lyng and will be looking to close the point’s gap at the top of the Championship.

Frenchman Steven Lenoir on the Evotech Stevens KTM currently holds third in the standing, with local rider Neville Bradshaw just seven points back in fourth place on the Putoline Honda. Northampton based Bradshaw will be hoping to improve on his previous results at Milton over the last two years. Heads and all Threads Suzuki rider Graeme Irwin is currently fifth in the Championship a further four points behind.

Other riders also looking for good results in the MX2 class include James Cottrell, Bryan MacKenzie and Adam Sterry. Just 6 points cover all three riders who have produced some strong results and are capable of the battling for overall podiums on the day.

In the MX1 class the current point’s leader Tommy Searle looks likely not to compete due to concentrating on the Grand Prix, meaning Tanel Leok on the Route 77 Energy Honda effectively leads the series by 26 points over MBO Sports Yamaha rider Kristian Whatley. Both riders have been riding well of late and will be hungry to get their first overall victory of the season.

Buildbase Honda’s Nicolas Aubin currently sits fourth in the points standings just ahead of Jonathan Barragan on the STR KTM in fifth place. Former Champion Brad Anderson also showed flashes of his former self at Lyng and will be keen to mount the podium at Milton.

Matiss Karro made his return to the Championship at the Lyng and produced a great result to finish in third overall and was looking forward to going better this time out after winning the overall at Milton last year. But following a crash at the Grand Prix of Portugal he will be out of action for around three weeks.

Other riders to look out for in the MX1 class include Jason Dougan, who produced a strong result at Lyng after a troubled opening round, while former World Champion Steve Ramon will be hoping to produce a strong result after a mixed start to the season.

Completing the line-up of classes is the MXY2 class which features the future stars of tomorrow. The MXY2 class is seen by many as the stepping stone into the professional ranks of the MX2 and MX1 classes. After two rounds of the Championship Brad Todd currently leads the standings ahead of Ben Putnam and Robert Davidson. Mathew Callagham currently sits in fourth place while Fat Cat winner John Adamson has slipped to fifth in the points.

The Milton MX Park circuit is located just off the M1 at Junction 15 from the South and Junction 15A from the North. For people using Sat Nav please use NN4 0JF and follow the road signs from the Tesco Superstore.

Practice starts at 9am with the first MX2 race leaving the start line at 12:15pm. Tickets cost £45 for a Family Ticket, £20 for Adults £15 for Concessions and £5 for Children, for more information please visit www.mxgb.co.uk