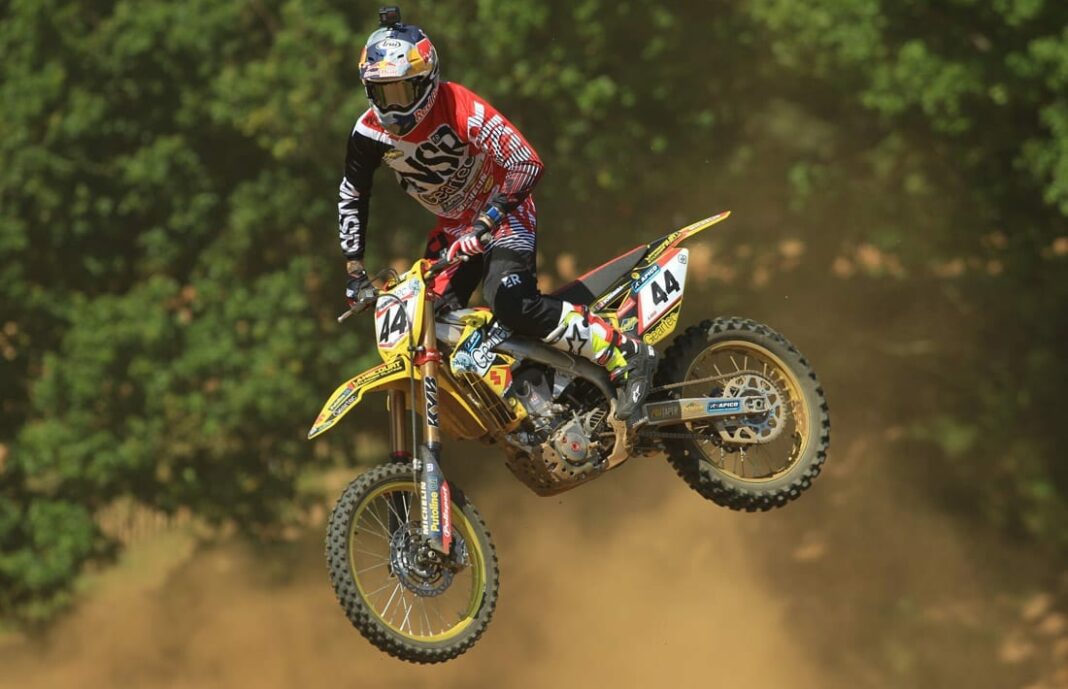 The sandy circuit near Woodbridge in Suffolk features a flowing layout which uses its natural changes in elevation to create an exciting race circuit for both riders and spectators.

It’s great to see local companies getting behind motocross and Mercedes Benz Truck and Van dealer, Orwell Truck and Van are supporting the round. Along with Foxwood Ceramics sponsoring the holeshot award for both the MX1 and MX2 classes, Steve Lumley Planing Ltd and John Banks Group will be on board for the event too.

During the first half of the season reigning MX1 Champion Shaun Simpson has been in dominate form, taking 10 race wins of the 11 held so far and has a healthy 56 point lead on board the Hitachi Construction Machinery REVO KTM.

But at Hawkstone the Scot came under pressure from Frenchman Steven Frossard on the Wilvo Forkrent KTM and Frossard is the only rider to beat Simpson this season.

Behind Simpson in second is Estonian Tanel Leok on the LPE Kawasaki with fellow countryman Gert Krestinov just 16 points further back on the Buildbase Honda.

Currently fourth in the MX1 class is MBO Power ASA Scaffolding Yamaha’s Brad Anderson who will be keen to use his previous knowledge of the Suffolk circuit to his advantage while Irish rider Martin Barr will be keen to put in another three solid results after narrowly missing the podium at Hawkstone.

Nicholls has suffered a troubled start to the season after suffering a broken arm in pre-season and will be looking to take advantage of racing on his clubs home track as he battles for a podium finish. For Banks-Browne Blaxhall will be the first outdoor event of the year for the two-time British Champion after suffering a broken leg in February and since then has worked hard to ensure that he is fully fit for his return.

In the MX2 class the battle for the championship lead is very close with Dyer and Butler KTM’s Frenchman Steven Lenoir leading the way by just eight points over GP star Max Anstie on the Monster Energy DRT Kawasaki.

After missing the opening round due to injury Anstie has claimed six races wins and three second place finishes and looks likely to claim the Championship lead at Blaxhall.

Also competing at Blaxhall is the Ipswich local James Cottrell who after recovering from an ankle injury last season has suffered a tough start to the season. Cottrell is looking to turn his season around at Blaxhall and score the results that he deserves.

Blaxhall marks the return of the MXY2 class to action with some of the fastest youngsters in the country battling it out for national honours.

Currently leading the championship is Jay Hague on the Monster Energy DRT Kawasaki with Ollie Osmaston in second on the MXW Racing Chichester Honda with Henry Williams holding third on the Feehily MX KTM.

The action starts at 9am at Blaxhall on June 28, with the Qualifying sessions followed by the first race main race at 12:15pm.

The Blaxhall Circuit is located just off the A12 north of Woodbridge and for people using Sat Navs please use the postcode IP17 1LG and the circuit will be signposted from that point.