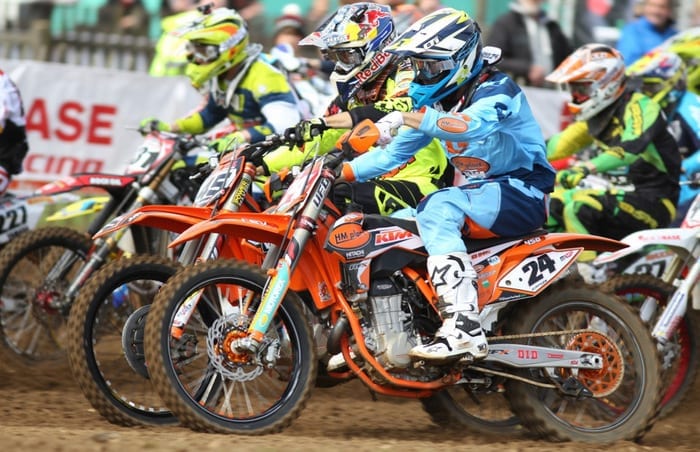 The third round of the 2014 Maxxis ACU British Motocross Championship heads to Foxhill near Swindon this Sunday (April 27). With two rounds of the championship already in the bag, the action on the track couldn’t be any closer.

The Foxhill venue is sure to produce some exciting bar-to-bar action as the battle to claim the upper hand in the championship continues.

In the MX2 class, Latvian Matiss Karro has been a dominant force on the Wilvo Forkrent KTM taking four out of the six race wins so far this season, unfortunately two crash filled races have stopped Karro from claiming the Red Plate.

That honour goes to Mel Pocock on the HM Plant Revo KTM UK machine who has taken the overall victories at the opening two rounds and leads the series by a small margin of just two points.

While Karro and Pocock will be battling for championship points, wild card Max Anstie will be looking to take all three race wins in a rare appearance at the Maxxis Championship. The MX2 GP front runner on the Bike It Cosworth Yamaha will be using the meeting as a chance to gain yet more valuable race time on the all-new 2014 machine.

Other MX2 front runners include Bryan MacKenzie and Adam Sterry who have already taken race wins this year, while Neville Bradshaw and Steven Lenoir have already stepped onto the podium this year. Although it is uncertain if the Frenchman Lenoir will be competing after suffering a nasty injury at the previous round which resulted in a huge cut to his right arm.

In the MX1 class the battle at the top of the championship sees Shaun Simpson on the HM Plant Revo KTM UK machine lead Jake Nicholls on the Wilvo Forkrent KTM by just five points. So far this season the racing has been extremely close with the pair taking five of the six race wins, with Dantac Husqvarna’s Nathan Watson claiming the other race win.

Current reigning champion Kristian Whatley sits third in the championship after taking two third overalls at the opening rounds. With a race win already under his belt Nathan Watson will be looking to step onto the podium at the end of the day, along with the likes of Buildbase Honda’s Brad Anderson. Ando will be the lone pilot on the Buildbase Honda with team-mate and reigning double MX2 champion Elliott Banks-Browne sidelined with an injury he picked up while racing last weekend.

Foxhill also marks the second round of the Veterans Championship and at Landrake it was reigning champion, Phil Mercer on the IDS – Chambers KTM who took the overall victory by the narrowest of margins over Brian Wheeler on the GL12 Racing Kawasaki and Ready Power KTM’s Greg Hanson.

The three front runners will all be looking to claim the advantage in championship standing.

Foxhill boast all round viewing on the steep hillside / valley circuit and can be found located adjacent to the M4 motorway. Admission prices are £20 for Adults £5 for Children under 15 and Children under 5 are Free, Family Tickets are available at £45.