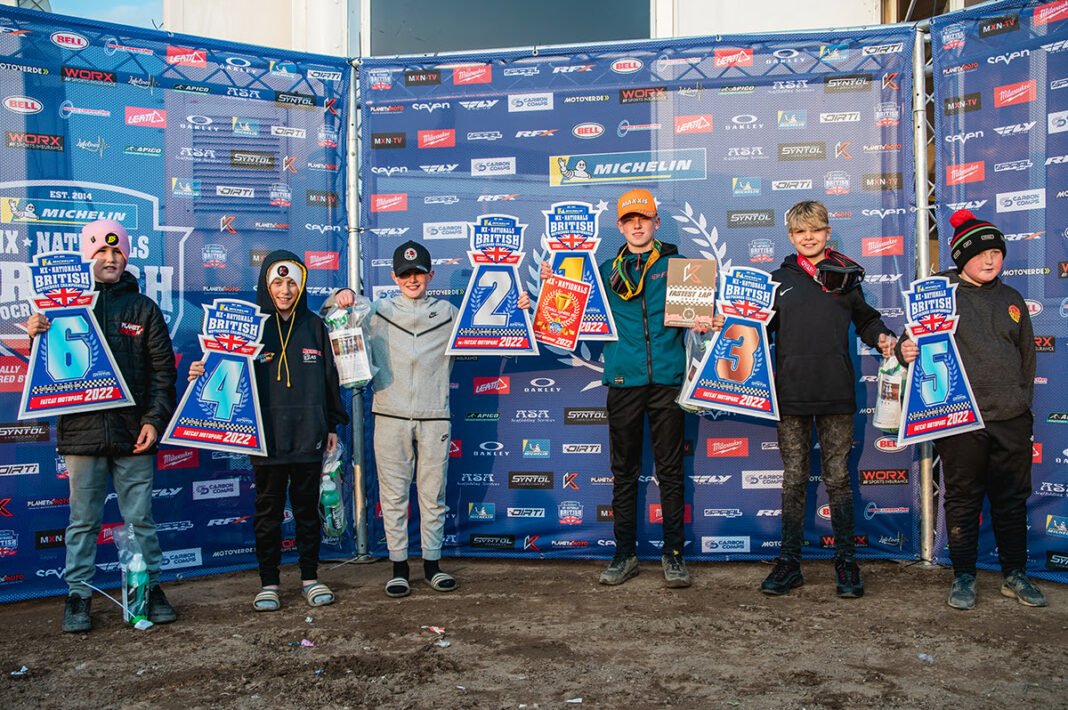 Following a successful opening round at the ACU British Championship, the SJP Moto Team were looking to do the same at the opening round of the Michelin MX Nationals at FatCat Moto Parc near Doncaster for their local event.

The track was in good conditions for the opening round held in bright sunshine at the challenging sand track. This weekend the team were back to five riders with the return of Jayden Haigh after last weeks crash.

In the second 85cc race, once again both riders started inside the top 5 and rode a great race with Josh finishing a solid second place in the Big Wheel class and Archie-Jay claimed the Small Wheel race win in 11th place combined.

In the opening 125cc class race Charlie Heyman took the race lead from the start and ran away with the combined race win by over 10 seconds. Unfortunately, Reece had a troubled opening lap and had to recover during the moto to move up to 6th in the 125cc class at the flag.

The Second 125cc race Heyman suffered a mid-pack start and recovered well to move up second in the combined race and claim the 125cc race win. Reece had another great race and rode well to claim 7th in the 125cc class and 9th place combined.

Jayden started his weekend well in the Expert class by starting inside the top ten in the opening race. After a strong start Jayden rode well to finish in sixth place in the MX2 class after narrowly missing out on fifth place.

In the second Expert Moto Jayden didn’t get the best of starts and then crashed in the opening laps which left him with a lot of work to do. As the race progressed Jayden managed to work his way up to 10th place in the MX2 class at the finish.

Sunday saw all 5 riders head back on track for their final two races of the weekend. In the opening 85cc race saw both Josh and Archie-Jay start inside the top 10 of the race, but unfortunately Archie suffered a crash on the first lap and had to recover from the back of the field. At the front Josh pushed forward to finish in second place, while Archie managed to recover and finish second in the Small Wheel class.

The final 85cc race saw another great race by both riders as Archie claimed the race win in the Small Wheel class, while Josh claimed second place. The results meant that Archie-Jay Girdham claimed the Small Wheel overall victory with 3 out of 4 race wins, while teammate Josh Vail took home second overall.

In the Youth 125cc class Charlie Heyman once again dominated the opening race to take the combined and 125cc race win, Reece was riding well early on, but unfortunately a electrical fault dropped him down the order and saw him finish 12th in the 125cc class.

The fourth and final 125cc race of the weekend saw Charlie make it a clean sweep of race wins for the weekend and leave the opening round with first overall and heading the championship. Reece rode another solid race and claim a well-deserved 7th place in the 125cc race and 7th overall on the weekend.

Jayden Haigh completed the weekend with a great opening race which saw Jayden riding inside the top 10 of the race and at the front of the Expert MX2 class where he would go on to finish a superb 3rd place. In the final race Jayden rode another solid race to finish with a 7th place finish in the Expert MX2 and claiming 5th overall and joint on points with 4th overall on the weekend.

Leighton Haigh – Team Manager – It was a great weekend for all the boys on a very tough track. Charlie once again never put a foot wrong. Reece continued to impress us with his bulldog spirit with a bit of bad luck over the weekend. We are really pleased for the 85 boys who rode their hearts out and got what they deserved and Jayden rode well after a tough week in a tough class.