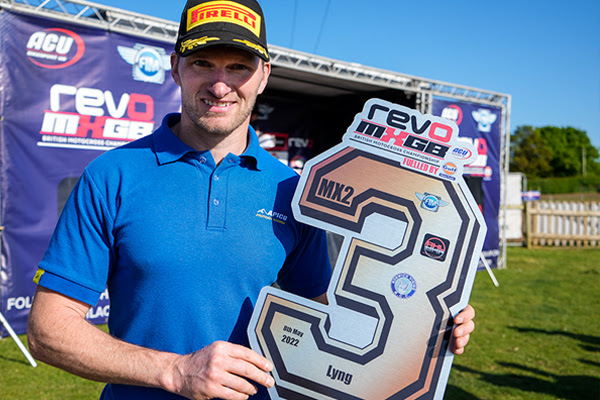 Round three of the Revo British Motocross Championship fuelled by Gulf Race Fuels was at the iconic Cadders Hill Motocross Circuit at Lyng, a calendar favourite and demanding track that was ready to test the best motocross riders in the country.

MX2 practice was hard work, with the timing screens down it was all on Jamie and Jack to ride without help from their mechanic’s boards for most of the session. Jamie managed a quick time coming out with a P3 and Jack not getting the momentum in his laps finished in 23rd position. In MX1 Stuart wasn’t feeling 100% and wanted to get some points on the board this weekend so didn’t push, qualifying 17th while Martin, also still suffering from fatigue gave a good account for himself finishing 9th.

After the tests of practice, Jamie had a good gate pick and fired up the start-straight and around the first corner in 3rd, just behind teammate Jack Lindsay!! Jamie got his head down by keeping an eye on the leading two riders, putting in a couple of quick laps before finding himself alone in 3rd place. This early push made for a long ride to the flag, though one he’d take any week to finish 3rd in MX2. Race 2 was somewhat of a re-run of race 1, though Jamie was feeling the pressure a little more from the following pack. Again, after an early pass, he rode out the race trouble-free to put the 2-Stroke Apico Husqvarna on the box for a second 3rd place in as many meetings. Jamie now lies in 2nd place in the Revo British Motocross Championship fuelled by Gulf Race Fuels MX2 Championship.

Not feeling his best, Stuart was out to give his all. In race 1 Stuart managed a decent start though was riding more cautiously than usual for the first couple of laps. As the race progressed, Stuart began to get into a rhythm. At the mid-point, Stuart was feeling comfortable and started his assault on the field making up a number of places and finally passing his last opponent on the final lap to finish 8th at the flag. Race 2 didn’t go to plan, out of the start, up Cadders Hill start-straight Stuart made contact with a couple of riders that resulted in a pile-up that caught out half the field behind him. Undeterred, Stuart pushed on passing 12 riders to break back into the top 20 by the halfway point of the race. He could see the next 6 riders in front of him, though could hear a noise getting louder he thought was coming from the engine. Not wanting to endanger himself with the bike locking up while pushing hard, Stuart decided to DNF race 2. Stuart finished 14th overall in MX1 on a single result.

Martin, still suffering from fatigue went into practice and put a solid 9th place fastest time on the board in lap 3. The first race saw Martin make a good start, pulling away with the front runners in 7th place. After a few laps, he broke his rear brake pedal tip-off, which made things harder, though he still managed to keep 7th until lap 9 when he encountered another technical issue which meant he had to DNF. There was a lot to take away from the race, the speed was there, and Martin was comfortable running the pace. In race 2 Martin had a decent start and ran in 9th for most of the race. He was unable to push due to losing energy, though still managed to maintain his position and cross the line 9th for 15th overall from a single race result.

MX1 was tough, both Stuart and Martin showing what we know they are capable of with speed and consistency. It was a shame for both riders that they had some technical issues. Stuart was making up places and coming strong into the second half of race 1 and Martin running well inside the top 10 of race 2 before they both had technical issues that ended their respective races. All the riders have come away healthy and although Stuart and Martin have suffered lately by not being 100% well, they are still getting good results and showing why they are amongst the best riders in the British Isles.