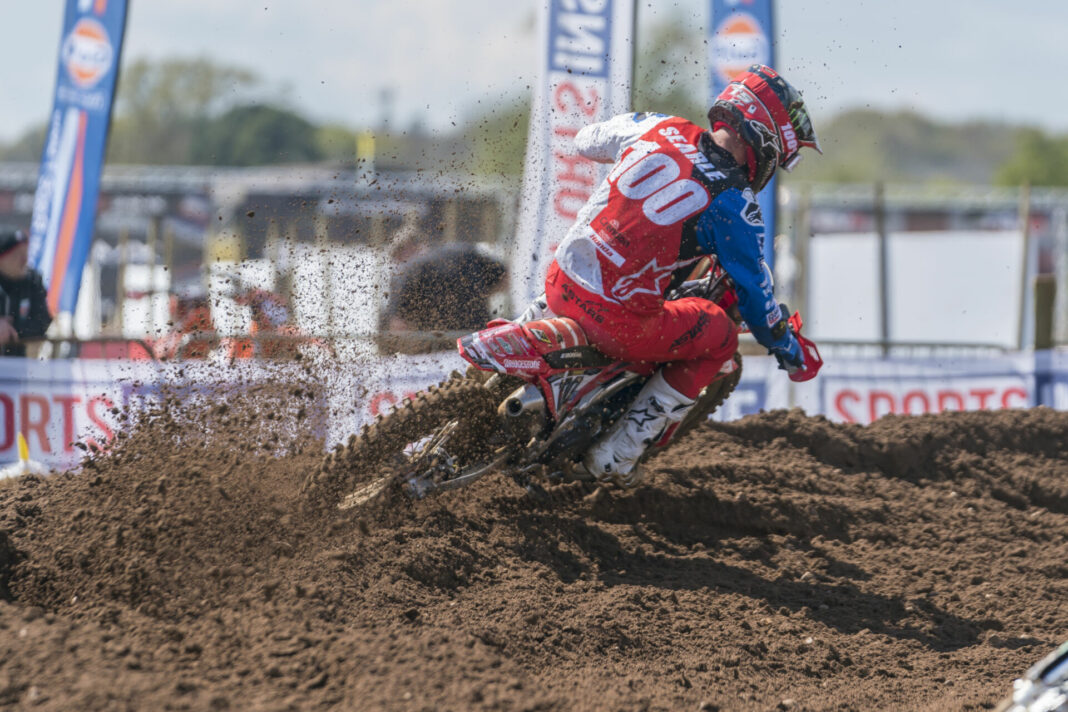 With MX1 rider Jake Nicholls following last-minute doctor’s orders to stay off the bike following injuries to his hand and shoulder due to a crash in training, it was left to 31-year-old Searle to uphold the team’s honour in the MX1 class.

Looking smooth and confident on the all-new 2021 Honda CRF450R, he set the fastest time in qualifying around the tough, hillside circuit on the banks of the river Thames. Although he didn’t quite snatch the holeshot in the opening moto, Searle came around the first lap in fourth place and set his sights on the men in front. He battled past Shaun Simpson but couldn’t quite reel in Evgeny Bobryshev and Dylan Walsh so took third.

Second time out Searle was quickly in third place, and battled hard with Walsh over runner-up spot. The pair fought long and hard, with Searle eventually making the pass and setting off in pursuit of leader Bobryshev. Searle caught up to the Russian on the final lap and came tantalisingly close to stealing the win but it wasn’t to be and he just missed out. But second place gave him second overall on the day.

“I feel good and happy with the day. It’s a naughty track, very tricky but I really enjoyed it. Coming into today I would have been happy with third and second places. I could have done with better starts, but I felt good in both races.,” said Searle.

“After finishing third in the first race I was feeling good for race two but when I was in third place I needed to get around Dylan Walsh faster than I did. I had him covered but he’s riding clever and I couldn’t get him.

“I finally passed him and put in some hot laps after that. I may have been able to put a push on Bobryshev but he was flawless all day. I’m really happy with the bike, and I feel good and I know what we need to do for the next round.”