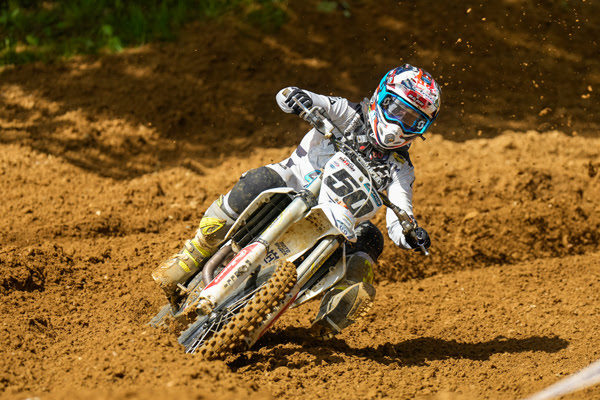 Round four of the Revo British Motocross Championship fuelled by Gulf Race Fuels saw the team venture down to Kent to line up at the Sidcup & District club’s Canada Heights venue.

Practice in MX1 was tough for Stuart trying to get a quick lap in, he made a few mistakes that cost him though still managed a fourteenth fastest time. This was something he knew he could improve on in the races. Martin was not on his favoured terrain, with it being super smooth and a fast track. With that said, he still managed to post a solid seventh in qualifying. In MX2, Jamie left it close to the end of the session to make it into the top ten fastest riders. This helped Jack Lindsay, who took a tow from Jamie on the same lap and made up some positions to go twentyfirst gate pick.

In MX1 race one Stuart was out dragged on the start, leaving him around twelfth, and then went down in the second corner. After managing to straighten out the bike from the crash, Stuart went from dead last to passing almost half the field for fifteenth. Martin had a good gate position; he managed a decent start and was fourteenth, after making a couple of early passes, he got his head down and passed a few more riders to finish ninth at the flag.

In MX2 race one Jamie was unlucky, making his way up the start-straight he was collected by some riders who’d crashed, leaving him stuck and had to get going towards the back of the pack. After digging deep, he was able to pass fifteen riders to finish thirteenth at the flag on the tight circuit. Jack had managed a good start inside the top ten, though crashed not long after and was unable to get to his machine as racers were still flying past. Remaining undeterred, Jack battled from the back to make half a dozen places, though still finished outside the points in 28th.

MX1 race two Martin Barr managed a good start, holding seventh position for the full race. The heat and recent bouts of fatigue Martin has encountered certainly meant it wasn’t easy and he wasn’t able to push. Using his experience and knowledge of the track he kept his head down and brought home a solid seventh place and finished seventh overall on the day. Stuart again suffered by being out dragged on the start straight, he then went on to make a couple of mistakes including stalling the bike and looping it out in a corner, which meant he lost a number of places. After managing to re-focus, Stuart was able to put the work in and pass several riders for eighth at the flag and ninth overall on the day. Martin now lies tenth n the MX1 Championship with Stuart in fourteenth.

MX2 race two was a similar story for Jack, he managed a good start that left him in fourteenth for the first lap and then had a crash that dropped him down the order to outside the top 20. With the heat and incidents, Jack was unable to push, only making up a couple of places due to riders DNF’ing the race. Jack finished the no-score weekend in 26th position. Jamie had made a good start inside the top ten, putting in consistent lap times throughout the race. Jamie was close to seventh, though unable to pass on the one-liney twists of the Canada Heights track. Jamie crossed the line for ninth in the race and overall. Jamie now sits joint fourth in the championship, with Jack in 25th.