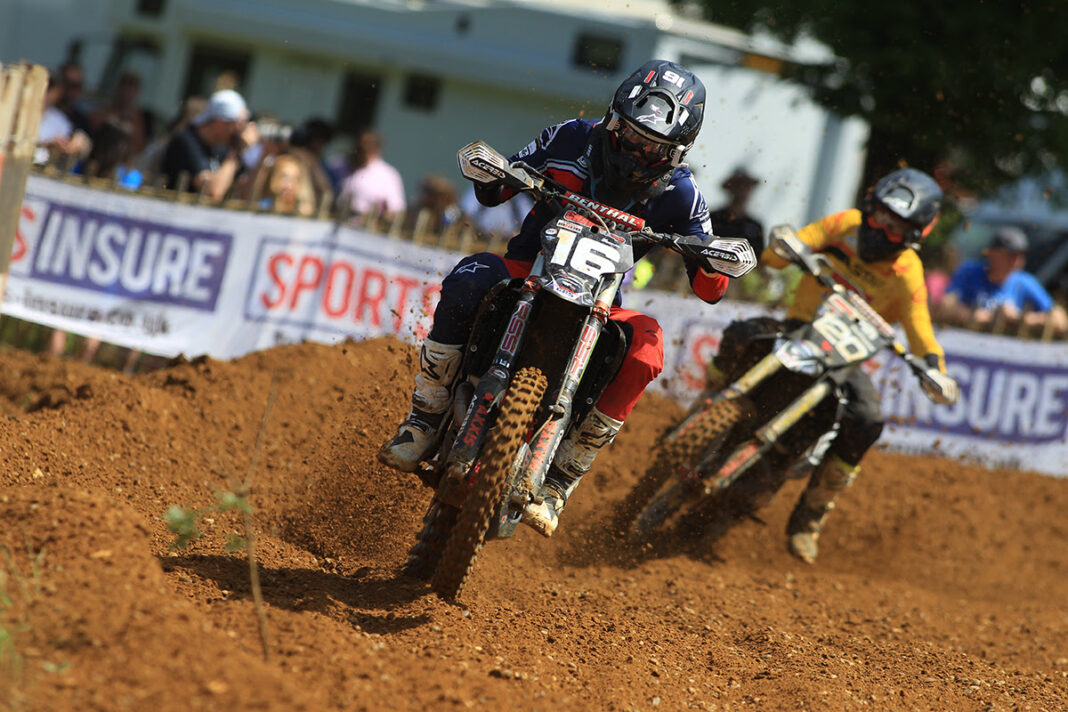 This weekend saw the Chambers Racing team head to the Kent circuit of Canada Heights for the fourth round of the Revo ACU British Motocross Championship fuelled by Gulf Race Fuels.

Red hot temperatures made for a challenging day for the riders as they headed out on track for the qualifying sessions. In the MX2 class Tom Grimshaw went fifth fastest with Alfie Jones going thirteenth fastest and Ben Putnam in eighteenth. In the MX1 class Glenn McCormick was ninth fastest, while in the Youth 250 class Harvey Cashmore was eleventh fastest.

In the opening MX2 race both Tom and Ben made great starts and rounded the first corner inside the top and avoided the crash, while Alfie was inside the top fifteen. As the race went on Tom moved into third place ahead of Ben, the pair pushed hard in the early laps and after losing a position mid race, Ben then made a move on Tom to claim fourth at the finish with Tom in fifth. Alfie rode a strong race to claim twelfth.

The second MX2 race saw Tom and Ben both make good starts inside the top ten with Alfie inside the top twenty. As the race progressed Tom moved forward into sixth place and managed to maintain the position until the flag, with Ben just behind in eighth place. Unfortunately, Alfie suffered a mechanical issue early in the race resulting in a DNF. Tom’s 5-6 scorecard saw him claim fifth overall and fourth in the Championship, while Ben two great results saw him take sixth overall. Alfie’s one point scoring ride gave him eighteenth overall.

In the MX1 class, Glenn made a great start in the opening race and was running fourth, but unfortunately the race was Red Flagged. In the restart, he made another top ten start but was struggling to get into a rhythm and battled the conditions to claim eleventh. In the second race Glenn was back inside the top ten from the start, but after his roll-offs broke on the first lap and a mistake dropped him to fifteenth, Glenn managed to make some passes towards the end to take twelfth and eleventh overall.

Canada Heights saw the Youth 250 class return and in the first race Harvey made a great start and was in third on the opening lap and rode a great race in take third at the finish. In the second race Harvey made another good start and was in fifth place and looking to repeat his strong result of the first moto before a mistake towards the end of the moto dropped him to tenth place and missing out on the podium in fourth place.

Team boss Tim Chambers “The guys all qualified well as we expected and then in the first MX1 race Glenn got a great start in third but then it was red flagged. In the restart he rode well from a mid-pack start to take eleventh.”

“In the second race he started eighteenth and moved up to twelfth for eleventh overall. In the Youth 250 class Harvey had a great first race to finish third and rode well to claim tenth in the second race.”

“In the MX2 class Ben Putnam on the 2-stroke was the surprise of the first race, starting in fifth and passing Tom for fourth place, then in the second race he had another good start to finish in eighth. Tom as always had two solid starts and two solid races to finish fifth and sixth for fifth overall behind the works teams. Alfie had a mixed day with a twelfth and a DNF.”