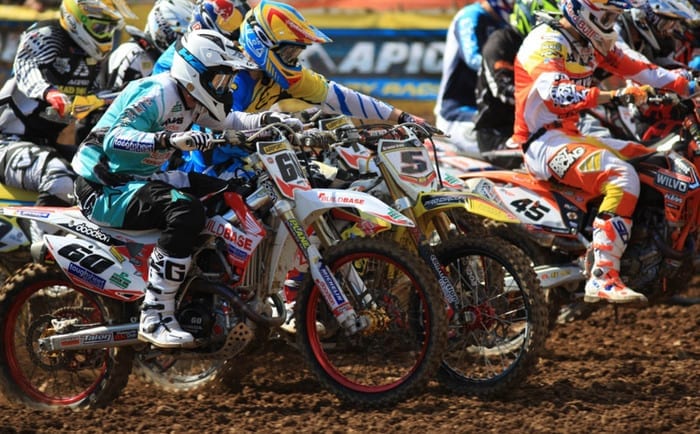 The second round of the Maxxis ACU British Motocross Championship heads to the fantastic Cadders Hill Lyng circuit near Norwich on Sunday April 6.

The Organisers Norwich Viking MCC has once again raised the bar with their preparation at the traditional Cadders Hill venue.

Considerable time and effort has been expended both on and off the track, with improved drainage in and around the paddock area; and re-profiling of some of the turns to create positive cambers and greater opportunities for overtaking.

Andrew Hay told us the heavy machinery used over a number of weeks has been very effective. “It’s probably the best condition I’ve ever seen the track in, and I am sure it will provide for some terrific racing,” said Hay, the Clerk of the Course.

For the third year running Stebbings Car Superstore of King’s Lynn – East Anglia’s number one car supermarket – have renewed their partnership with the local round of the Maxxis British Motocross Championship.

On track HM Plant KTM UK’s Shaun Simpson will be looking to continue his winning ways after taking the overall victory at the opening round at Landrake in the MX1 class. Simpson took two of the three race wins after finishing third in the opening race.

Dirt Bike Rider columnist, and local pilot Jake Nicholls will be looking to take victory in front of his home crowd after arriving at Landrake suffering from his back injury but still managed to take a race win in the first race. Following three more weeks of recovery the Ipswich based rider will be looking to put the Wilvo Forkrent KTM on the top step of the podium.

Reigning champion Kristian Whatley on the MBO Sports Yamaha cannot be ruled out of taking a share of the victories following his third overall finish at Landrake. Whatley showed that he had the pace to run with both the Grand Prix riders and isn’t prepared to hand over his British crown anytime soon.

Another local rider to look out for is reigning two-time MX2 champion Elliott Banks-Browne (now in MX1), who took three fourth place finishes at Landrake and will be looking to get onto the podium at Lyng.

With the strength of depth in the MX1 class there are a number of high calibre riders who could produce a surprise or two, including Brad Anderson, Alex Snow, Gert Krestinov, Nathan Watson and Graeme Irwin.

The Norwich Vikings club has also agreed a wildcard ride for multi-British champion Carl Nunn in the MX1 class and Marcus Nilsson in MX2, who is spending time in Europe during a break from his racing activities in America.

While club members Luke Parker and Declan Whittle will be lining up in the MX1 and MXY2 classes respectively.

In the MX2 class the battle will be between Matiss Karro and Mel Pocock after the pair finished the opening round tied on points.

At Landrake it was Matiss Karro who dominated the opening round on his Wilvo Forkrent KTM by taking pole position and victory in the first two races before crashing in the last race. That last race crash by Karro allowed HM Plant KTM UK’s Mel Pocock to steal the overall victory and the Red Plate.

Currently third in the standings is Steven Lenoir on the Dantec Husqvarna ahead of Putoline Apico Honda’s Nev Bradshaw and DBR wordsmith, Bryan MacKenzie on the Pendrich Kawasaki.

Other riders to watch out for in the MX2 class include Lewis Trickett, James Dunn, Adam Sterry, Jason Dougan, Steven Clarke and Ben Watson, along with local riders Lewis Tombs and James Cottrell.

Lyng also marks the start of the Maxxis MXY2 Championship, with a full line up of youngsters all looking to set out their stall for the year. Some of the front runners include Liam Knight, Josh Gilbert, Mitchell Lewis, Jay Lamb and last year’s British Youth National Big Wheel 85cc Championship Jay Hague who is making the move up.

This is an event not to be missed – the Lyng circuit is reached off the A47 trunk road approximately 5 miles to the West of Norwich. All the action will start at 9am with practice and qualifying, followed by the first race of the season at 12:15pm.