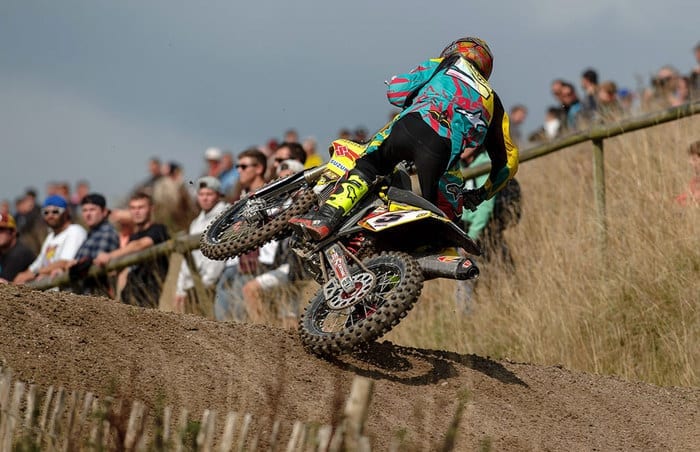 The Maxxis British Motocross Championship drew to an end at the famous Foxhill venue in Swindon this past weekend, with Heads & All Threads Suzuki’s Graeme Irwin taking the brand-new 2015 Suzuki RM-Z450 to the podium with a second place overall.

The weekend started strongly for Irwin, with qualifying delivering pole in both the qualifying and super-pole sessions, before he raced the new RM-Z450 for the first time and to its first moto win.

Out of the gate behind race leader Elliott Banks-Browne, he chased after the Honda rider, lining him up and making his move halfway in. From then it was a strong run at the front for a win after twenty-five minutes.

Irwin was quick to work his way to the front again in the second race after losing a few positions on the opening lap, fighting off fellow Irishman Martin Barr along the way. He crossed the finish line in second, but a few yards behind race winner Banks-Browne.

The final race saw Irwin and Banks-Browne embroiled in another duel, before a brief loss of rhythm half-way through cost Irwin several places. Settling back into a rhythm, he finished sixth for a second overall on the day. While his overall position put him ahead of his rival Brad Anderson, the difference was but one point short to pip Anderson to third in the championship.

“I was quickest in qualifying and quickest by 1.3 seconds in super-pole, so the day was looking good,” said Graeme Irwin. “In the first race, I got second off the start behind Elliott, made a pass just over halfway through and walked away with the win.

“In the second race I didn’t have a good start and came through from about seventh to second, not far behind Elliott; I thought I rode well.

“In the last race I didn’t get the best of starts either. There were yellow flags on the track and after another rider passed me halfway through, I lost my rhythm. Coming into this round, Brad Anderson was four points ahead of me in the championship, and in the last lap of the last race I had a five point lead on him which put me in third, but then he passed Elliott halfway through, which gave him a one-point advantage for the championship.

“I’m gutted about missing third by one point, but Brad’s ridden really well this year. A big thanks to the whole team for helping me out, today was really, really good, we’re second overall on the new Suzuki – it’s just a bummer we lost third in the championship in the last race.”

Qualifying for the team’s MX2 riders, Luke Burton and AMCA recruit Lewis King, started at 9:15 and delivered a twenty-first and twenty-seventh place respectively.

For Burton, the first race was the most solid and garnered him three more points in the championship. A mid-pack start developed into a strong run in 20th before making a move for 18th place. The second race got off to a much worse start, but some quick passes early in the race put Burton within sight of the points again, ending the race in 21st. The final race ended but a few laps in. Downed on the start, Burton remounted in 23rd and was well on his way back to 20th when he was forced to pull off. His score at the end of the day was 23rd.

“Qualifying didn’t quite go the way I planned, but I was happy with 21st,” said Luke Burton. “In the first race I had a bad start, pulled through from 28th to 18th, which I was pretty happy with. The second race start was absolutely shocking, but I pulled through to 21st in that race, and in the last race I came off on the start straight, and I can only thank the big man above for keeping me healthy because it was a big one.

“I’m happy to be in one piece at the end of the season, and thanks to Heads & All Threads for looking after me.”

King’s first race saw him around the first lap in 13th, but he was progressively pushed out of the way by other riders, ending the race 22nd. His second race also did not get of the gate well. Around the first few corners nearly last, he fought his way forward to end 28th at the chequered flag. The final race of the day improved again with a start in 19th. A small crash dropped King out of the points, and he subsequently struggled to push forward again, ending 23rd.

“Today was harder than expected actually,” commented Lewis King, adding: But I’ve had three not-too-bad rides and come home in one piece, so I’m quite happy.”

Team Manager, Neil Prince commented: “The guys rode well today, they were where they were expected to be, Luke was where he’s been all year, he gets a 14th-place start and can finish 14th, when he gets a bad start, he comes through.

“As for Lewis King, we gave him a chance to ride the race bike today to replace Jordan Booker. He was in the top 15 for around 10 minutes and then lost the tow a little bit, so for him, coming from the AMCA, it’s been a bit of a shock.

“These guys are going full-gas for 20 minutes every race. He wanted to go home with some points, but I think he now knows what these guys are like.

“Graeme, I’m gutted, winning the first race, second race good as well, and in the last race, I think it tensed him up with another rider overtaking on yellow flags, it’s a big thing getting third in the British championship. Still, it’s a step forward, we’re one point off a third, and we’ll come back stronger next year. This year, injuries aside, has been a good step forward, we’ve been strong. We’ll now get ready for next year!”

Heads & All Threads Group Managing Director, Stuart Whitehouse said: “It was really exciting today! Obviously I’m gutted that Graeme missed third place in the championship by a point, but he rode really well on the 2015 bike.

“He rode his heart out and you couldn’t ask for more than that really. I think next year bodes really well, since Graeme’s re-signed for the year and we’re happy to be here next year as well. We’re still looking for another rider, and hopefully we’ll be able to announce something quite soon on that front.”