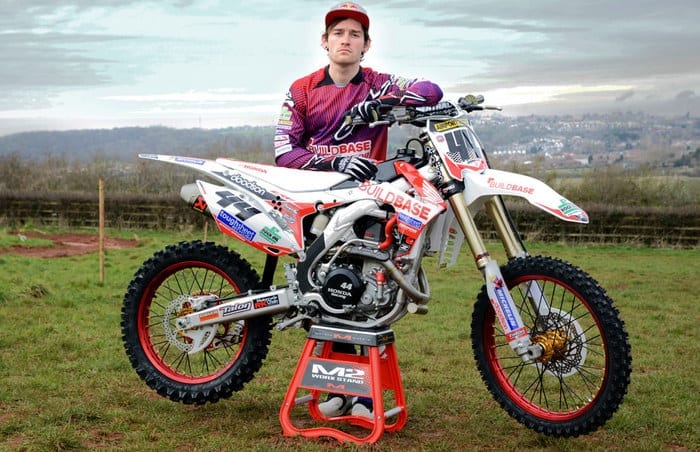 Buildbase Honda will welcome back reigning double British MX2 champion Elliott Banks-Browne after he missed the final round of Arenacross in London with minor injury.

EBB will move to MX1 this season and is feeling good on his Honda CRF450R: “I’m looking forward to this season; it’s a new bike, a new team and a new class. I’m feeling really good on the CRF450R and gelled with the bike straight away. I think that I ride the 450 much better than I ever rode the 250,” says EBB.

He added: “It’s going to be a hard season ahead with a lot of competition, but I believe I can win and I’ve been putting in the work all winter long for this, so let’s make it happen.”

The team will mount its assault on the MX1 championship with a strong, three-rider line-up – joining Banks-Browne is the two-time British MX1 champion Brad Anderson who will be seeking to re-discover the form that took him to a podium finish at the end of last season.

“I’ve been waiting for this weekend for a long time now,” says Brad Anderson. “I’ve been working hard with the team and can’t wait to get the season underway.”

Nez Parker, the third rider in the team’s MX1 line-up will unfortunately miss this weekend’s moto and is facing between four and six weeks on the sidelines after breaking his hand in a recent crash.

“I can’t believe it,” said a frustrated Nez Parker. “I raced at the first round of the South West Premier championship as we thought it would be good practice for Landrake this weekend. And it would have been if I didn’t crash, as the track was perfect. The outcome is 4-6 weeks recovery, so hopefully I will be back for Lyng!”

The action begins with practice at 9am on Sunday morning followed by the first gate drop of the season at 12:15pm

Dave Thorpe – Team Manager commented: “Although the off-season has been very long and the weather has been dreadful, the whole team has been working hard to produce the best bike possible. Two of our riders are fit and ready for an exciting year; it’s just a shame that Nez was injured so close to the start of the season, but he will be back soon and running at the front.”