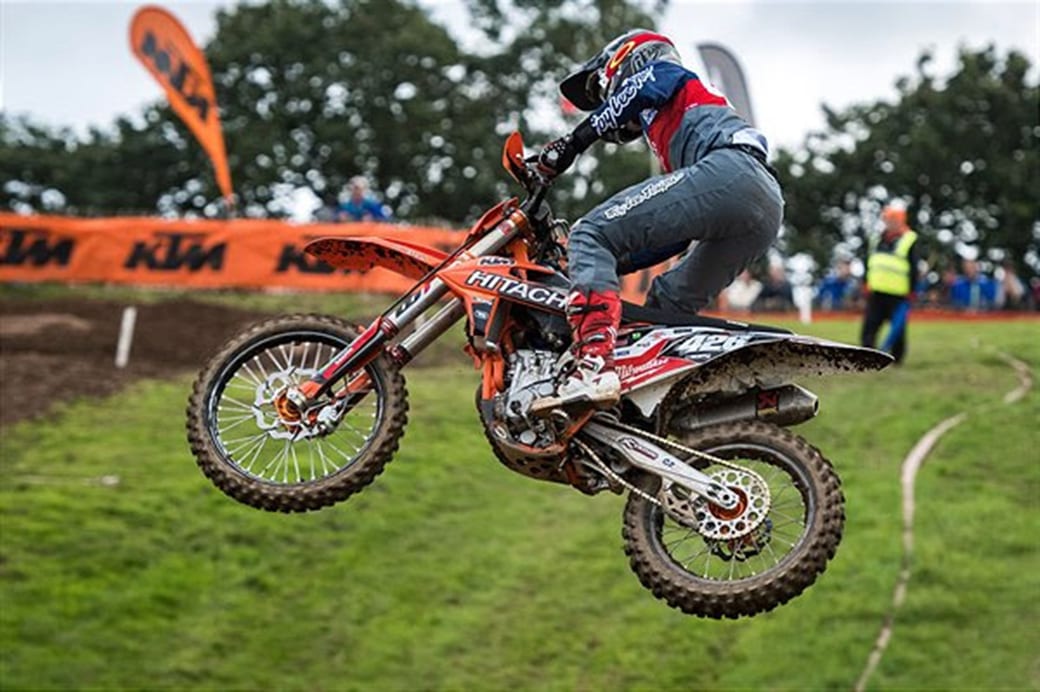 The final round of the Maxxis ACU British championship at Landrake in Cornwall started under leaden skies after a night of heavy rain had made for challenging track conditions.

Conrad Mewse made a welcome return to action after injuring his wrist at Canada Heights in May and looked like he’d never been away, making light work of the mud to claim the third-fastest time in qualifying.

Michael Sandner crashed during a practice session during the week hitting his shoulder which meant he was unable to race, doctors advising him to rest in readiness for the MXoN.

In race one, a good launch off the line put Conrad amongst the leaders and as the pack settled down he was in second place, pressing for first spot. Landing heavily from a jump on lap five caused him to jar his wrist and lose a place before he could regroup and take a strong third-place finish.

Race two was a virtual repeat as Conrad again battled for the lead before a small mistake on lap eight saw him slip to third. He remounted quickly and challenged to regain his second place but time was against him as he finished in third place. Second overall was more than anyone had expected and just rewards for a hard-fought day.

In the MX1 class, debutant Oli Benton finished inside the points with p17 in race one and narrowly missed scoring in the second race with p21 on his maiden outing on his KTM 450 SX-F.

Conrad Mewse: “I’m happy how the weekend went. I wasn’t expecting to stand on the podium today so I’m more than happy with that.

“I’ve not raced for five months which is the longest I’ve ever been off the bike so it’s nice to be back.

“It’s was tough conditions, but I couldn’t keep the smile off my face today. I was smiling every lap today even though my wrist was painful. I want to thank Roger and the team for standing by me, now we can go into the off-season with a podium and come out swinging next season.”

Team Principal Roger Magee: “We came here expecting Conrad to be in the top five at best, he’s only been on the bike a few times in the last couple of weeks but as usual he’s surpassed our expectations.

“He fought well for the win in both races and coming away with second on the podium is more than we had hoped for today. The good thing is that he’s back on two wheels and we’ve got all winter to build on.

“It’s good for the sponsors to end our British championship on a high note and we look forward to hosting Team Austria at the MXoN in Assen next week.”